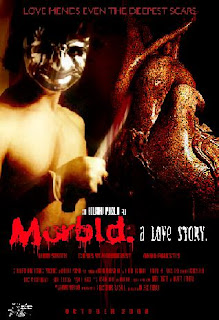 Something new for Dead Harvey is we've been receiving info on indie horror movies in progress. The latest is an ultra-indie but what it appears to lack in budget it sure as frag makes up for in gore. Holy crap, every pic I've looked at involving this movie has had graphic carnage.

Here's the synopsis as included in the press release:

Christian (Liam Smith) is a typical college student besides the fact that he is a serial killer. He sees death as the greatest art form, ranking his targets by degree of difficulty and making his victims his easel. Christian takes a liking to Belle (Anna Palestis) a girl in his class and falls in love. He decides he wants to lead a normal life and stop his killing ways, but old habits die hard. Meanwhile, F.B.I. agent Jack Stevenson (Chris Vanderhorst) who was assigned to Christian’s case three years earlier has grown distant to his family due to the demands of the case. He feels guilty when his family dies in car accident caused by a man falling asleep at the wheel. Jack feels the man deserves to die and battles fantasies of murdering the man himself as a way to make amends with his loved ones. When he finally tracks down Christian, he has a new plan. Although there is plenty of blood and gore, the film is different from a typical run of the mill slasher film because the serial killer is the protagonist. The role of hero and villain change throughout the film, making the viewer question right, wrong and his or her own morality. The film’s overall message is that love heals even the deepest scars and makes you question whether doing bad things for the right reasons is justifiable.

Morbid: A Love story will run the film festival circuit in late 2008 and will be released on DVD nationally and worldwide in 2009

The Morbid: A Love Story Trailer can be found on Youtube here.

May want to put the kiddies to bed when you watch this. Especially since the director sent me the following note in an email:

"I've been told to let everyone know that the murder scenes in this film are extremely grotesque i.e. baby eating, penis chopping.... Just a little something if you'd like to add it. Thank you Brad."

Now let see you top that, Hollywood. What's that I hear? No response. Yeah, that's what I thought. Dead Harvey will be interviewing the director, Edward Payson after film is complete. Stay tuned...
Posted by mr. toad at 11:00 AM