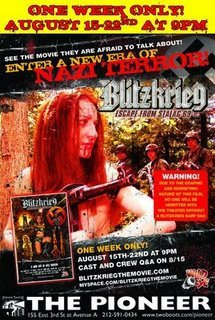 Holy shit, better get this out there quick.... remember that film we covered a little while ago called "Blitzkrieg: Escape From Stalag 69"? The film that's ushering in a new era of Nazi terror? If you don't, here's the link to the interview we did with the director and distributor. Well, for our New York area readers, I just caught wind that they're doing a limited theatrical run, starting tomorrow. The director, cast & crew will be there for a Q&A on the 15th, the director will be there alone on the 21st. See the press release below... or click on that picture to see a bigger version for details.

NEW YORK, NY – The first Nazisploitation film made in nearly 30 years, one that has been called “The most daring and disturbing exploitation roughie to attack the screen this century” begins its New York theatrical run for a week starting Friday, August 15th at 9pm at The Pioneer Theater. The theater is located in the lower East Side at 155 Third Street at Avenue A. The cast and crew of the film will be on hand for a Q & A after the movie.

During the last days of World War II, Helmut Schultz and his cohorts in Nazi terror brutalize their POWs with biochemical weapons experiments and torture for entertainment. After a group of captured showgirls arrive at the camp, the women begin to plot their escape alongside the other misfit prisoners in hopes of overthrowing the Nazi demons, even if it means leaving the camp on a slab. Meanwhile, ritually-tortured Russian prisoner Natasha takes on soldier after soldier using only her body and her wits as she gouges, gores and guns down the brown and black shirts and paves a path for the bloodiest, most brutal Blitzkrieg ever committed in any war!

No one admitted into the theater without a Blitzkrieg Barf Bag, which will be given out with each ticket purchased at the box office.

To purchase tickets for opening night: https://www.tix.com/Event.asp?Event=149695
Posted by Dead Harvey at 10:00 PM