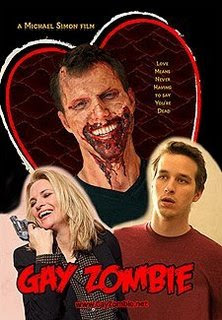 Not too long ago, if you scoured the internet looking into horror festivals, looking for new horror films or were just trying to find out what's going on out there in the world of indie horror, the name of one short film was popping up everywhere... "Gay Zombie". Michael Simon's "Gay Zombie" played in over 60 festivals, has garnered him various awards and accolades and, aside from that, it's a great film. When it comes to short form film, it's spot on. It's got a great, concise, story and it doesn't shy away from the gore or the humor. We talked with Simon and, on top of being a really down to earth, nice guy, he had some great insight for other indie horror filmmakers looking to do the festival circuit. If you're making a horror short, thinking of making a horror short or want to do the festival circuit, this is a great read. Check it out...

Just when I thought the zombie genre was getting tired, I saw “Gay Zombie”. Where did the idea come from?

I kept seeing all these awesome zombie movies on the festival circuit the last few years – I got jealous – I’ve always loved the genre (especially Return of the Living Dead). I was sort of obligated to make a gay movie cuz I’d made all these connections with festival directors and distributors, thus Gay Zombie was born. The more I developed it the more he became a closeted zombie.

Gay Zombie cost WAY too much! I was very fortunate to have a backer who footed about 2/3’s of the budget. My backer was actually a friend who wanted to do the project and had the spare dough. We spent approx three grand on just the zombie make-up and gore FX, so do the math from there. Gay Zombie had a full paid crew and hired locations etc. One day I had 40 people on set – as writer/director/producer I just about shit myself.

Tell us about the make-up and effects. I thought Brad Bilanin’s make-up was particularly good… Very zombie-like, without looking too grotesque. Who did the effects and how were they achieved.

We met with a Makeup FX artist named Frank Ippolito. My producer Maria Montgomery and I needed to decide if we were going for the “high production level” look and if we were willing to pay for it. The answer was “yes”. People are a taken aback that the zombie makeup is so professional – Frank had the whole system down – it really added to the film not to mention photos, pr, etc.

We shot on HD, Panasonic HVX200. We also used a 35mm adapter to get the film look.

The acting was great, another high point. How did you cast the film? Was there any difficulty there? I can only imagine that you got some strange looks when you were telling potential actors what the film was about.

I hate casting. I usually use friends and actors I’ve met over the years in acting class – I usually write with specific actors in mind. I actually had a tough time casting the leads in this one – I opened up the casting and had official auditions – as an actor, I really hate seeing people pour their guts out when I know they’re not right. It makes me feel icky and then they email wanting an explanation why they weren’t cast. I was thrilled with Brad and Ryan.

BTW – I pride myself that actors have turned down my movies. I love it! I have had many actors pass on my projects only to see them play worldwide – too gay – too this – too that.

Well, the 35 adapter was a pain in the ass – very tricky and difficult to focus – caused some big headaches in post. It also had a spec of dust (bad luck) on the lens which plagued us in post as well. My shot list was SO HUGE it was near impossible to shoot it in 3 days, but we had no choice. I was nearly lynched by the crew the day we shot all the house stuff when everyone realized we weren’t near done and it had already been 6am-11pm – oops. We had to cut a scene of the actor whose house we were using – he wasn’t too pleased.

One of the most impressive things about the film, to me, is the fact that it screened in over 60 festivals. What kind of advice can you pass on to a filmmaker who’s hoping to make a film that gets into festivals?

Well, you have to use the With-out-a-Box website to do multiple submissions. It’s the only way – unfortunately, the fees range from $10/$15 up to $65 a pop – however, the horror fests generally keep them pretty low. I played so many festivals because it was gay. When your movie gets into Outfest or one of the big gay fests, you start getting multiple invitations and requests to screen at gay fests all over the world. That’s how Gay Zombie has played in 15 countries – almost all without submission fees – and some even paid me!

What did you get out of the festival experience? How beneficial would you say it is to a career?

The festival experience is a fun ride, BUT, at the end of the day you’re left standing in the lobby with your friends and the other directors. Again, with gay genre, you’re much more likely to be approached by a distributor. I’m telling you – go gay! If you’re straight – go gay anyway – good story – good production value and you’ll get distribution and exposure. Also, the gay horror genre is GROWING

What about distribution? How’s that going? Are there any lessons that you would pass on to other indie filmmakers who’ve just finished a film?

Again, I’m not really savvy on the straight or horror compilations – they are much tougher to find. 2 out of my first 3 shorts got worldwide DVD distribution deals. Gay Zombie got a 3 year broadcast deal with the LOGO network – so it’s been playing on TV for real! I also signed nice DVD deals with Germany, France and the UK – at this point I don’t have a U.S deal, which is curious.

There is a company out of Canada called Ouat! They seem to be a very reputable distributor of shorts – but go for the exposure – you won’t see much money.

Where can people find out more about “Gay Zombie” or, better yet, buy a copy?

People can go to my website gayzombie.net for all that is zombie and to buy a copy for $14.95 including shipping.

I just finished the feature length script Gay Frankenstein – it’s a real winner and will hopefully get made. I don’t think my friend with the extra dough will cough up half a million.

What kind of advice can you pass on to other indie horror filmmakers?

ADVICE from me? I’d say this – Story is the most important thing – an audience will forgive production glitches as long as the story/concept is entertaining – you don’t need to spend a ton with a great idea. Also, PACE!!!!! It’s a short – keep it moving – don’t let the audience lose focus for a second or ask, ”What is this about?”
Posted by Dead Harvey at 3:00 PM