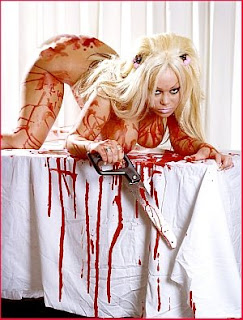 I'm gearing up for the long weekend, which means stocking up on booze and not working tomorrow. So, I've got a quick post here on some horror film festival stuff, plus I'll be posting another interview we did some time this afternoon... and, I know this picture has nothing to do with anything that I've written below. I just like the picture. If you're interested, it's Natasha Talonz, who talked with Horror Society about a film she acted in, "The Horror Convention Massacre 2". I found the pic on their site...

I know we just mentioned the The Madison Horror Film Festival last week, but they already have a pretty cool update that I thought was worth mentioning. They've partnered with Apprehensive Films and are offering a distribution deal to the winners of the Best Short film and Best Feature film categories. I think it's a bit of a no brainer to distribute the winners, as it's a win/win for everyone and I think you're going to see more people stepping up and doing stuff like this... so, click on that link there and get your film in the festival.

Here's a new one, I think... I don't remember mentioning the Horror Society OR the fact that their having their 1st ever film festival this October - October 11th in Chicago, to be exact. According to them, they're "bringing you the most brutal, blood filled, and extreme horror ever seen on the big screen." Plus, it's all low-budget, underground horror and their goal is to provide "a platform for aspiring independent film directors and talent to debut their work and skills to Chicago." They've already filled the slate of films, so you can't submit or anything, but if you're in the Chicago area, do check it out.

So, here's another good festival that's done accepting films for the year... The Sacremento Horror Festival is October 17th - 19th this year and they "exist to deliver high-quality independent and popular studio-release horror films, sci-fi features and short films to the horror movie fan." They're also doing something pretty cool this year, called their "2008 Film Challenge - The Final Minutes of a Slasher/Zombie Film." It's a great idea and I'd love to see the submissions. It's too long to explain here, but it's worth reading about, just because it's a great idea. Check out the details of the challenge here.
Posted by Dead Harvey at 11:00 AM