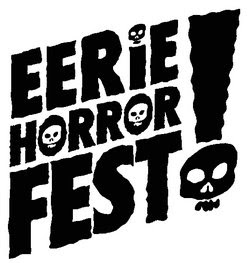 Well, alright then... let's finish off the week with some news on the festival and convention fronts.

The Eerie Horror Fest is one of the favorites of the indie-horror scene and, guess what? They're now taking submissions! This fest has been around since 2004 and has really grown to be one of the big indie horror festivals. Not only that, they have a screenwriting competition, as well as a video game developers section to go along with the films. Last year Fuji Film was a sponsor and gave away $2,500 to the winner of best cinematography, I'm not sure if they're doing that again this year... regardless, this year there's $10,000 in cash and prizes. They're a pretty cool festival, as one of their mandates is to try to play an active role in connecting their filmmakers and screenwriters directly with those in the industry. All that AND there's a convention, this years guests include: Sig Haig, a Texas Chainsaw Massacre Reunion, Kane Hodder, Tony Moran... the list goes on. Conclusion - for low-budget indie horror filmmakers, this is one of the festivals to go to or to enter. Click HERE for info on submitting your film, screenplay or video game or just click HERE for more info on the festival.

I have to mention The Rue Morgue Festival of Fear, which is this weekend - Aug 22-24. If you're in the Toronto area, you're going to want to stop by this one. There's tons of awesome films screening, lots indie stuff and there's lots of guests, including Wes Craven, Tobe Hooper, and others... AND then there's the off site events, which means parties. If you're not in the area and aren't planning on going, it's one you should definitely look into attending next year.

Now, a festival that just came to my attention and is just getting going... On Saturday October 25th, Icon Entertainment will be presenting the 1st annual Madison Horror Film Festival. You can submit right now, but you have a small window to get your film there. Late entry is on Sept. 19. For more info on submitting your film, go here. The event will take place at the Orpheum Theatre Stage Door in Madison, WI. Besides presenting some of the best independent short and feature films in the horror genre, they are pleased to announce Kenneth J. Hall as a guest speaker at the event. It looks like they'll have awards, although they don't mention any cash prizes. Full Moon is all over their website, so they may be a sponsor or involved somehow. Anyhow, I don't know any more than what the website says. I'll try to get in touch with them and dig up more info. You can find the website here.

Lastly, one reader was asking about a screenwriting competition called Scriptapalooza. To be honest, I had no prior knowledge of it, but I did look into it. However, before I talk about the competition, this gives me a good opportunity to mention a few things that I think people should know ...and this rule of thumb goes for almost everything, too. You have to remember that most of these festivals and competitions, regardless if they're good or bad, are looking to make money. Now, that's not a bad thing, by any means. You just have to look at HOW they make their money... and Scriptapalooza not only looks legit, it looks pretty good. (1) there's a lot of industry professionals involved. That means they're looking for scripts, don't kid yourself. Studios and indie producers are asking to read what these guys have and the festival's taking a fee from them. That's good for you, it's kinda like having an agent... in a round about way. (2) They're in the press quite a bit. This means they're putting themselves out there. A lot of competitions are just lurking around in the back of horror mags or online, asking for $50 from you and that's how THOSE guys make their money. These guys are in lots of industry papers and that's not necessarily to get your attention, either. They want the industry to know they exist. (3) There's good success stories. Always a bonus to see. Long and short, these guys look legit and they look like a good competition. The only thing I don't like is that they don't have categories. So, it's horror vs. drama vs. comedy, etc. I always find that horror can get lost in competitions like this. However, there are judges from After Dark Films, Lionsgate, Asylum and a few other companies that have been involved in horror. So, if your script has anything to do with monsters, slashers, aliens or mutants, you're better off entering The Eerie Horror Screenplay Competition, Shriekfest, Slamdance or even PAGE. If you've got a dark, brooding, psychological thriller-type script, you might do alright.
Posted by Dead Harvey at 9:00 AM