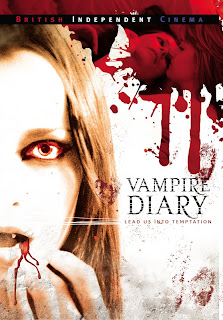 Okay, this really is a great week for indie horror... but before I get to the main releases, there's a few cool releases that I'm not going to elaborate on, but I do want to mention, including: the directors cut release of "Brotherhood of the Wolf

" (an awesome film), the rereleases of "Phantasm 4: Oblivion

" (has to be mentioned), the release of the J-Horror, "The Black House

", which really deserves more than just that, but... I'm going to give ALL of Tromadance its due in an upcoming post. So, as usual, PLEASE click on the titles if you'd like to buy the films from Amazon and/or go to our Youtube page if you want to see the trailers!

Out of the UK, comes "Vampire Diary

", which was directed by Mark James and Phil O'Shea, written by Phil O'Shea. It won 4 awards at the Milan International Film Festival and they were all the big ones; Best Film, Best Editing, Best Cinematography and Best Actress. If THAT doesn't impress you, maybe the idea behind it will. "Whilst making a documentary, filmmaker Holly meets the highly enigmatic and beautiful Vicki who claims she is a real-life vampire. By turns fascinated by and attracted to her, Holly thinks that Vicki could be her soul mate and soon the two embark on a passionate affair. However Vicki's lust for blood is growing and when Holly discovers that Vicki is pregnant with a 'vampire' baby, she is drawn into a spiral of death, deceit and betrayal from which she will never emerge." That's right... lesbian vampires and, by the way, the lead actress is the Princess from Hellboy II. Reviews are awesome, too.

" comes from director Adam Wingard, who also co-wrote, shot and edited the film, and it was his first feature film. He made two horror shorts before this and one short and another feature after. This film has an unreal cast, with Bill Moseley as the smiling maniac called 'Mr. Suitcase', as well as scream queen Tiffany Shepis and Tom Towles from "Henry: Portrait of a Serial Killer". 'Mr. Suitcase' carries a suitcase full of razorblades and he unleashes a super human killer on a group of kids, so they are forced to take up arms with an insane Chili enthusiast if they want to survive. Fangoria calls it a "gorfest that does what so many recent low-budget shockers claim to do" and Fantasia called it "a well-shot, unsettling gorefest" with "excessive bloody effects". Dead Harvey says, sold! Where do I get my copy?

"Coons! Night of the Bandits of the Night

" is from Travis Irvine and, yes, it's about killer racoons. It's Irvine's first film and it's as low-budget indie horror as it gets. First off, I can't get enough of the title... using 'night' twice is just awesome. Secondly, believe it or not, I found a review of the film on nytimes.com, here's the link, and they love it, saying "the laughs flow like rabies-infected blood in the gruesome horror comedy about a group of college campers besieged by a pack of killer raccoons." I can't wait to check this out...

Well, now it's time to get a little violent and messed up. "Skinned Alive

", formerly called "Eat Your Heart Out", is from James Tucker, written by Joshua Nelson and it's being released by Lionsgate. It's about a desperately lonely man who finally meets the love of his life, but unfortunately for him, she's a prostitute who is, literally, feeding on the men of New York. "Sex will never be the same..." Disturbing violent and sexual content, language and nudity follow.

" looks like another kick ass indie horror, this one from Scott Phillips. It's got an unreal cast, including Trent Haaga (Troma veteran), Gunnar Hansen (the original Leatherface) and a bunch of other low-budget indie horror regulars. It's about a dangerous, bloodthirsty 'family' traveling in a van, who decide to outdo a previous notorious 'family' by slaughtering every person in a remote small town. Now, here's the capper... on their myspace page, they say they had "several less-than-appealing offers for distribution" and they've "decided to take matters into (their) own hands and distribute the movie (themselves)". So, here is yet another chance to support indie horror! Pick up a copy!

" is an Australian horror from writer/director Kieran Galvin and this is one along the lines of "Jack Ketchum's The Girl Next Door" crossed with "Black Snake Moan" or "Misery". It's about a sultry swindler, Liz, who attempts to commit suicide, but is rescued by a lonely tow truck driver... who takes her to his remote farmhouse, convinced that she's the wife who abandoned him years earlier.

I don't know why I'm writing about this and not Tromadance, but I have to comment on Uwe Boll's latest film, "Postal

", which comes out today. It was made in 2007, was based on the 2003 computer game series of the same name and had its premiere in Montreal on July 22, 2007 during Fantasia Fest. The film is as offensive as it gets... and I don't mean with gore, I mean it's just offensive. The opening scene has two guys hijacking a plane to the Bahamas, only to be overpowered by the passengers, who, in the struggle for control, end up driving the plane into the South Tower of the World Trade Center. It had a budget of $18Million and after it's theatrical run, managed to gross a grand total of $142,761 worldwide. I, uh... think that says it all. Wow, Uwe... wow.