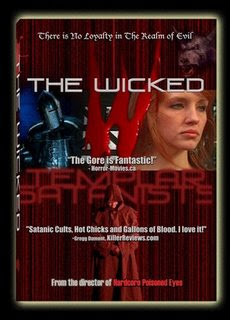 In Sal Ciavarello's, "The Wicked", the Knights Templar take on a Satanic cult. Oh yeah, and hot chicks get in swordfights. Now, that right there is worth the price of admission alone. You can buy "The Wicked" off Amazon by clicking here

DH: Tell us about yourself. Where are you from and how did you get into filmmaking?

SC: Born and raised in the Bronx, New York. I got into filmmaking at an early age, through an interest in animation actually. When I started all this I used something called a Super 8mm film camera. After experimenting with stop motion animation I discovered the films of Dario Argento and George Romero and the rest is history.

SC: Yes. School of Visual Arts in New York city. Majored in film production then switched my major to screenwriting.

DH: "The Wicked" has a pretty crazy storyline. Where did the idea come from?

SC: I wanted to make a movie where there are no "good" characters. A film where the protagonists are Satanists, and the ones fighting in the name of God are just as evil if not more so then the main characters that the audience should be rooting for. It's a major gamble. The story throughout the 3 year process evolved into this insanely jam packed tale of different factions being at eachother's throats. It can be overwhelming, but my main goal was to make it the
most entertaining horror thriller I could make under the limited means we had to work with. I actually went against my main philosophy being that the stories that are the most effective are the ones that are character driven. And it's hard to make a character driven piece when you have at least 27 characters dying in your film.

DH: Who are your primary influences as a filmmaker and why?

SC: George Romero for his masterpiece "Dawn of the Dead" which is a great character driven film, because you really do care about what happens to those characters and Dario Argento for his visual style.

DH: "The Wicked" is a very ambitious movie. What were the biggest challenges you faced in pulling it off?

SC: I've always been accused of being ambitious and I take that as a compliment. So thank you. The biggest challenge I faced on this film was dealing with the people problems. I had to write the lead actress out of the film because the situation just became too unhealthy to be on the same set as her, and it's the major reason why the film is no where near as close to the original script. It's also the reason why there are so many other characters in the film. That was the most unfortunate incident and the most difficult decision I had to have made on this film.

DH: What did you sacrifice personally to get your film made?

SC: Besides what I just mentioned? I guess I sacrificed my life for 3 years. All your focus, and all your money is poured into this project, so you don't exactly live the lavish lifestyle because of it.

DH: How did you get Jackie Martling and how much of his material in the film was scripted and how much was improvised?

SC: I am a huge fan of Howard Stern as you can imagine and I simply took a shot to see if he would want to come on board for a cameo appearance. The scene was kind of improvised. I wrote the main idea of what was to happen in the scene but Jackie wrote all the jokes. There is a part where he calls the Senator a "cunt" and that was because the actor who was playing the senator jokingly insulted Jackie and Jackie fired back with that reply. It was so funny that I just had to cut it into the scene.

DH: With all the mayhem and swordfighting, how did you keep everyone from getting hurt?

SC: Well some of those swords were made of plastic but some were very sharp and very real. I believe I cut myself pretty deep with one weapon that was shaped like two devil horns. There were a few bruises here and there but thankfully no major injuries. Kristin Woodburn who plays Katia actually choreographed the sword fights. She has some major experience in that area and did a fantastic job and I'm so grateful to her coming on board in that manner as well.

DH: How would you describe your directing style?

SC: On "The Wicked" I would say overwhelmed. When you have to worry about cinematography and directing actors, it can be very overwhelming. I wasn't the best "actor's director" on this picture as I was with my first feature. But I managed and did the best I could.

DH: The locations, costumes and gore all added a great deal of production value. Any tricks on how you got all these lined up for the movie?

SC: With time and a lot of help. Hahaha. Vincent Guastini provided us with the props and the creature that is in the film but he's in L.A. and we're in New York, so we had some people handle the blood and gore effects here.

DH: What was the budget and how did you go about securing financing?

SC: Cryptkeeper Films approached me about making another horror film after Hardcore Poisoned Eyes and they put up half of the money. I provided the other half.

DH: What's your advice to aspiring filmmakers regarding getting their movie out there? What's the most important thing they need to know about the distribution process?

SC: Expect to not see a dime if you get handed one of those "net profit" deals. If you're movie isn't the second coming of a George Romero film and Nicole Kidman isn't starring in your picture then you better make sure you have the tightest, most riveting story that will knock everyone's socks off. If not you can self distribute the film like I did through amazon and hope that fans spread the word about your movie. Hahaha.

DH: What's next for Sal Ciavarello and will, "The Wicked" have a sequel?

SC: What's next may not be a horror film, it all honestly depends on if we can push at least 5,000 copies of "The Wicked" out there. We really need to see if we can make our money back and then we'll talk next project. It's tough because the market for independent cinema is drying up. No one cares about small indie films anymore. Digital video and HD technology has saturated the business with a lot of wanna be filmmakers. It takes more than the ability to hit the record button and point a camera at actors to make a picture. There needs to be an understanding of the craft which comes with experience, film school, and just getting a ton of work under your belt before you can call yourself a filmmaker.

SC: "THE LORD SATAN", a film about the end of the world. ILM doing the CGI effects, Rick Baker handling the prosthetic effects, Naomi Watts and Daniel Day Lewis as the leads, and making it the scariest tale ever put on film.

For more information on Sal Ciavarello and "The Wicked", you can go to The Wicked Myspace page here or the Profound Images site here.
Posted by mr. toad at 11:00 PM