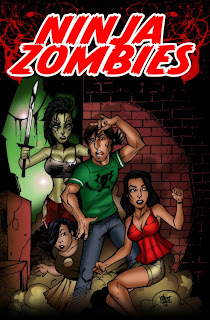 Like peanut butter and chocolate, ninjas and zombies are two great things that go great together. "Ninja Zombies" is an upcoming film and graphic novel. Our interview here is with Steve Kahn, writer and director of the film. The graphic novel adaptation is being done by Stephen Stern, author of the "Zen: Intergalactic Ninja", "War of the Worlds", and "Beowulf" graphic novels. Be on the lookout for both, which should be arriving in the near future. For more information, check out the website at: ninjazombiesmovie.com, as well as Steve's myspace site at: myspace.com/konspirefilmworks. This certainly looks like an awesome project. Thank you for the interview, Steve! Dead Harvey is looking forward to both the film and graphic novel!

DH: First off, the title for your comic, "Ninja Zombies" is f'ing awesome. Ninjas and zombies are two great things that go great together. Where did the idea come from?

SK: Ummm. My writing partner at the time. Glad you like it! She said I've got your next project: "Ninja Zombies"! And I said Ninja Zombies??? Then I said NINJA ZOMBIES!!!

This movie is definitely a fun thing and that's reflected in the title which says it all: crazy fighting, zombie gore and humor like "Shaun of the Dead" but maybe not so British. The main character is this sex obsessed guy so the movie has elements of sex and sensuality as well. It's crazy, fast and fun!

DH: What led you to working on, "Ninja Zombies"?

SK: I was studying martial arts at the time and happened to have the worst Grandmaster in the history of Grandmasters. This guy would literally lie and cheat people and use his 9th degree back belt status in that community to do so – and to me that had to be the villain in this screenplay I was starting to write. In the similar way that he dominated and controlled people in real life I made his character (the evil and actually fake NINJA ZOMBIE) dominate and control the people in his sleepy little backwards village.

My old Grandmaster was a complete sociopath-narcissist and the funny thing I found first-hand about those kind of people was that others followed them like sheep. He would do things like try to sleep with only the hot female students (he had western taste) and when she would inevitably reject his advances. He was in his 70s by the time I was studying with him and though he still could sparr and do the splits he had grown fat and a bit out of shape. Anyway, he would tell everyone that the female student was the one who was actually hitting on him! And people would believe him! And she would get kicked out of the studio or leave in shame!!!

Real dishonorable stuff went on and on and I have a book full of stories but the guy wasn't above stealing or cheating on his wife with a girlfriend he kept for years!

Most of us will never meet a Charles Manson or David Koresh or Jim Jones. And when we hear those stories we say to ourselves "well those followers must be so dumb" and "how could they be so blind" but that kind of power wielding by a sociopath is amazingly powerful – as my Grandmaster proved to me.

So my "NINJA ZOMBIE" character, Master Foo, was the same – he has his own stable of sexy girl students. But, everything changes on the day that the story's hero, Owen (think Owen Wilson type), comes to town and falls in love with Foo's number one girl.

So when our hero Owen – who works for a powerful land development firm - comes to town to gain control over the land for renovation but instead falls in love with Foo's number one girl, Tia, we have a perfect setup for the comedy and drama that ensues.

DH: How will the film and comic book differ?

SK: I'm not sure because Stephen Stern (author of "Zen: Intergalactic Ninja", "War of the Worlds", and "Beowulf" graphic novels) is doing the adaptation.

Of course I'd like the graphic novel to be exactly like the screenplay and Stephen has his own ideas so we butt heads. Sometimes he's right and sometimes I am. But, the great thing working with him is that we both agree that the project and not our ego comes first. So as long as the best idea wins we're both happy and we both could care less who came up with the "best" idea as long as one of us did.

DH: Do you see, "Ninja Zombies" as an ongoing series and, if so what do you have in store for us in the future?

SK: Stephen's interested in turning it into a comic book series (he's even been talking action figures!) so maybe after the film's released those comic books will spark some other paths to follow. That just seems too in the future to think about right now though.

DH: Ninja and Zombie stories have been told in various ways over the years. Tell us about your own particular approach?

SK: That's the danger of telling yet another zombie film. A filmmaker can't be afford to be boring. As one of my mentors (Quinn Redeker, who wrote "The Deer Hunter") says: "Takes us to where we've never been! Show us things we've never seen!" And with Ninja Zombies, though we have zombies and martial arts, that was (as it is always) my aim.

So, there is nothing traditional with the zombies or martial arts in this film. The Ninja Zombie mythical creature is a new type of mythical creature and really represents the bringing together of opposites – which to get deep for a minute, is a theme running through the film. A ninja is a graceful agile artist and a zombie is a dirty out of control ogre. The film dares to bridge these two unlikely paths. But, when you think about it life really is like that. We often do have to bring two drastically different parts together in union and rationalize them somehow.

For example I really believe that man's nature is basically polygamous but then as men we have to somehow rationalize that with another part within us when we fall in love and get married – as does my lead character Owen who boffs the bosses secretary in the first scene and proceeds to try to nail every girl he sees – until he sees the girl of his dreams, Tia.

DH: When will "Ninja Zombies" be attacking the masses in both graphic novel and film?