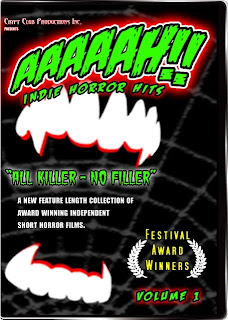 I've mentioned Aaaaah!! Indie Horror Hits before... but, to refresh your memory, their plan was to take a bunch of horror shorts and put them together on a DVD to give them a life after the festival circuit. In the meantime, the filmmakers of those shorts would keep 100% ownership of their film, there's no up-front fees or anything and you get to split profits with Aaaaah!!. Let me just tell you this, the more and more we talk to people in the industry, the more and more we know that there's lots of sharks out there that are going to try to rip you off. From my conversations with Miguel Gallego, the guy behind Aaaaah!! and The Crypt Club, I can tell you... he's not one of those guys. He's really in it to help filmmakers out. That's why I'm happy to let you know that "Aaaaah!! Indie Horror Hits - Volume 1" is just about ready and that you should really check it out! Here's some info from their press release...

"ALL KILLER – NO FILLER” This is the good stuff. The short horror films that caused a buzz on the festival circuit - then vanished. If you saw them the first time you know what we mean. If you didn’t, you can enjoy them now - for the first time.

From a dark, cautionary tale (The Crypt Club - with Alison Pill from Pieces of April) to gallows humour on the job (Ghost Busted); from the grotesque otherworld of H.P. Lovecraft (The Veil) to today’s outbreak fears (The Ninth Entry); from the stylishly bizarre (My Skin! – with Tony Simmons from Human No More & Carnie) and the chillingly macabre (Oculus) to the dire family survival drama (Old Friends - from Kevin Greutert, editor of the SAW films).

We've resurrected these great short indie horror films. Turn down the lights and dig in for your own private horror film festival.

The DVD will be available in September, but they're holding the DVD's Worldwide debut at the Crypt Club Productions booth at the Rue Morgue Festival of Fear in Toronto, August 22-24. Drop by and pick up a copy! Otherwise, you can go to the Crypt Club Productions site here or go directly to the Aaaaah!! Indie Horror Hits site here... if you're interested in submitting your short film for the Volume 2, click here.
Posted by Dead Harvey at 9:00 AM