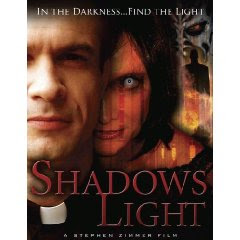 "Shadows Light" is all about exorcising demons. In a way, I believe this is what indie horror filmmakers do because, at the end of the day they're one of the nicest, most unpretentious groups around. I've been on sets that have been the complete opposite of indie horror (both genre-wise and financially) and I had to stop counting all the pretentious a-holes I ran into because there was too many to keep track of. Stephen Zimmer is a perfect example of an friendly, helpful filmmaker who believes in supporting the indie horror community. The interview here contains a lot of useful advice on making your movie outside of L.A., getting funding and how's he believes a little idea called hope can't do any harm. Congrats on the movie Stephen! Dead Harvey thanks you for the interview and looks forward to your upcoming work!

For info on Zimmer's film check out the website at www.myspace.com/shadowslightmovie and head on over to Amazon

to buy yourselves a copy.

DH: Tell us about yourself. Where are you from and how did you get into film making?
First of all, thank you very much for the opportunity to interview with you, Brad. I truly appreciate the opportunity to be on Dead Harvey.
As far as where I am from, I was born in Denver, Colorado, but I have lived most of my life in Lexington, Kentucky. I got into film making from a lifelong love of storytelling, from books to movies.
I played around with video cameras as I got into high school, but by the end of high school into college I was focused on proper camera techniques and still photography. I have always loved writing as well, and so I came at film making largely from a writer’s perspective at first. My first projects were short films and documentaries, while I also worked on commercial productions. Eventually, I got a pretty comprehensive view of all aspects of production, which has helped me greatly as a director.

DH: Who are your biggest influences as a filmmaker and why?
My biggest influence is Peter Jackson, as I loved his early horror work such as Dead Alive and Bad Taste on up to his worldwide explosion with Lord of the Rings and King Kong. What a career! He does what he does out of a true passion for film making and storytelling, and not for superficial motivations.
He also is very dedicated to his community and his team in New Zealan. When he broke through, he opened up the floodgates of opportunity for those around him. He saw the big picture with those that helped him included. I admire that kind of loyalty very much.
So I have to say that it is Jackson's character as much as it is his penchant for bringing the fantastical alive in a gritty and believable way that inspires and influences me!
DH: Film school: yes or no?
No. Visual Communications Degree from Hardin-Simmons University!

DH: "Shadows Light" has several religious themes. Did your personal beliefs influence and/or inspire the film?
The Catholic world has a 2,000 year history that is rich in imagery, lore, history, and so much more. For a film drawing on the supernatural, I definitely drew upon my Catholic background, though imagination is required in many instances such as ones depiction of demons, souls, and other non-physical elements. I reached a little farther abroad for some other elements, such as the Djinn.
I thought that it would be a challenge to create a protagonist who was a dedicated priest. He is not Gandalf the Wizard, nor is he Jet Li, in terms of the tools he uses to overcome evil. In that sense, I explored the core of a man’s faith, especially where he has to admit weaknesses. Not the easiest of tasks!

DH: Describe your individual take on the possession film?
Possession is present (whether one attributes it to psychological or paranormal roots) in societies all around the world, so a possession film has a resonance that crosses cultural lines. At its core, it is an exploration of the concept of evil and freewill. It also allows for quite a range of portrayals and interpretations, ranging from the subtle to the fantastical. As such, I believe it will hold its place in future storytelling.
As far as Shadows Light went, I have always been fascinated by the accounts of Malachi Martin (Hostage to the Devil), and his experiences were part of my background research for this project. Those familiar with Malachi Martin’s work will pick up on some of the elements he describes regarding various exorcisms and possession cases.

DH: What was the budget and how did you go about securing financing? Furthermore, what, would you say is the most important information an upcoming filmmaker needs to know when they're trying to raise money to make a movie?
Low, low six figures! I went about giving presentations, hosting “meet and greet” parties (where we set up exhibits showing demo reels, storyboard sequences with music, models from SFX people, etc), attending private meetings from referrals by friends and associates, and other similar activity.
The important thing to know, especially for a first time feature director, is that you are going to get rejected by an overwhelming majority of those you approach. And I mean overwhelming majority. The key is to use every window you can to reach out so that out of a large number of pitches, you will give yourself a chance to cull the small group necessary to finance the film. Also, make a professional, cohesive presentation with visuals as much as possible.

DH: What was the film shot on and what do you recommend upcoming filmmakers use?
We shot the film on modified Canon XL1S’s, which were fitted with mini-35 adapters (true optical adapters that address depth of field, etc) that enabled us to use a full range of Cooke lenses. It wasn’t the optimal setup I would have liked, but it did result in a very good look.

DH: Describe your directing style.
Some might say I have a more laid back approach. I know I am not a drill sergeant on the set. My focus is to adapt to each individual actor. Very different approaches are needed for different types of actors to draw out the best performances. Some need a nudge, others need a kick in the rear, and others need to be left with room to breath.
The key is identifying which is which, and approaching each one on a basis that best communicates with them. I also emphasize rehearsing, which we were fortunately able to do a lot of in preparation for Shadows Light. And I do really feel we got a range of good performances out of Shadows Light.

DH: What were the biggest challenges and/or sacrifices you faced in the process of making, "Shadow's Light"?
Probably could write a book on this one. I had to wear a few hats on this one. Honestly, the biggest challenge was the constant battle to convince people that we really could manage a budget and a schedule and bring this project to a conclusion, especially as a first time director. Some people that saw us proposing a 22 location independent film in Lexington with 8 different creature designs on a 6 week shooting schedule thought we were completely nuts.
So many people were always second-guessing whether we were capable of doing this. On the other hand, there was a group here that was bound and determined to see this project through and make it happen. I’m glad the latter element prevailed.

DH: Tell us about your experience with the distribution process? What advice do you have for upcoming filmmakers trying to get their movie out there?
Very difficult. We went through some hurdles here, and at times were supposed to be released by 2 or 3 other companies. Things changed due to changes in personnel, restructuring of companies, and other things far beyond our control. It was a roller coaster.
We finally landed with Passion River who put the DVD out in North America. We’re far from done with the process, as we have foreign territories to explore, an HD release at some point, and new media options/digital downloads.
My advice to filmmakers is to try and secure a producer’s agent, especially if you are coming from a part of the country that is not known for its film industry yet (I.E. My home state of Kentuck!). A producer’s agent can usually offset this type of disadvantage.
Also, try and create the most professional package possible when soliciting. Its worth the added investment and hassle.

DH: What is the one thing you would like people to take with them after they watch, "Shadow's Light"?
The one thing I would like for people to take from it is to keep an element of hope. Things seem really out of whack nowadays, and not much seems to make sense anymore. No person alive possesses a full store of knowledge on the universe or of all possibilities out there. In other words, don’t assume the worst. Leave the door a little cracked open for possible sunshine too. There’s nothing wrong with that, and there’s already more than enough negatives and prophets of oblivion out there.
DH: What's next for Stephen Zimmer?
Two things on the near horizon.
My first fantasy novel is in the process of getting edited by a very wonderful editor based here in Lexington named Amanda DeBord. We are exploring publishing options and hope to have it out by the end of the year.
I have an extended short film (35 minutes running time, roughly) tentatively called the Sirens, which is being paired with a 50 minute film called Murderer (which was shown last year at Cannes) for a kind of double-shot DVD release that I am doing in conjunction with Cineline Productions.
It is more straight ahead horror, involving 3 male chauvinists who get quite a surprise from six very attractive females who are much more than they seem.
Farther ahead, I can now move forward on planning for my next budgeted feature. I promised those who backed us on Shadows Light that I would not raise money or do a budgeted feature until I got Shadows Light to the finish line. I kept my word.
As of August 5, 2008, that has been accomplished! So now time to look ahead!

DH: If you had an unlimited budget, what would your dream movie be?
Easy answer for that one. Medieval Epic Fantasy.
Posted by mr. toad at 3:00 PM