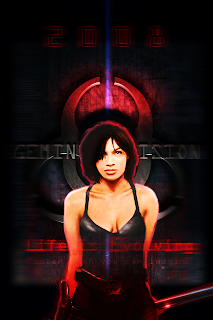 Usually I try to mix up what the stories are about when I do this Linkapalooza thing, but there was too much going on in the world of online video projects this week. So, this week is dedicated to what's going on out there and what you, as an indie horror filmmaker, should take away from it.

Gemini Division Blasts Off Aug. 18 on Broadcastingcable.com: This is a very short article on NBC Universal Digital Studio's first original web series, "Gemini Division". The project was actually announced a few months back, in April, and it's hit a point where it needs to be talked about. The most important thing about this isn't that it's a studio with money backing a project that's going to be soley distributed online, the most important thing is, it actually has a name actress in it, Rosario Dawson. It's going to be seen on NBC.com, SCIFI.com and on its own site, GeminiDivision.com, as well as on a number of VOD and mobile platforms, Amazon Unbox, Xbox Live Marketplace and Zune. It's a 50 episode series, with each episode only being a few minutes long... check it out, if this catches on, you're going to see a wave of projects like this and if you've got an idea that can fit this format, time to sharpen the pencil and get to work.

Can Comcast Make TV 2.0 A Reality? on multichannel.com: If the fact that the studios are starting to financially back projects like the afore mentioned "Gemini Division" doesn't convince you that the internet is changing the way we watch video, maybe you should take a look at what the cable companies are thinking. This article is about Comcast, their online property Fancast.com and what they think about the future of TV. I actually get lots of emails from Fancast because I signed up for it a while ago, but I never really read them... However, I'm going to start. I didn't realize that it's more than just an online video aggregation site. It's more like Tivo on steroids... it's supposed to "navigate a universe of TV and movie content to find that special show no matter where it lives: online, on a cable network or broadcast TV station, on video-on-demand, on a mobile phone, or even in movie theaters." Now, that's cool. I t's also cool technology for indie horror filmmakers. Why? Because if this kind of system catches on, it's going to make it easier for people interested in low-budget indie horror to find your film. This is why indie-horror is about to explode as an industry. The biggest hurdle has always been finding an audience.... in a few years, that's going to change because the audience is going to find you.

Sony Goes Into 'Coma' Web Series on adage.com: Well, just when I thought that "Gemini Division" was SO groundbreaking, I read about "Coma", Sony Picture's web series that's going to be distributed on YouTube, Hulu and AOL and on AT&T and Verizon mobile platforms. Not only does this project ALSO have name actors in it, George Hamilton and Michael Madsen, but it's got something that "Gemini Division" doesn't. Big time sponsors. Sony Electronics and Microsoft have both given a pile of money to the project, as their products will be heavily showcased in the series. Either way, once again... if these guys are doing, you ought to think about doing it. To reiterate myself, get that pencil sharpened and get to work!

Consumers to Spend $6 Billion on Internet Video Services by 2013 on CEPro.com: Just to wrap this all up, why don't we check out what the industry thinks about where internet based video is heading? Well, if you couldn't tell by the title, they think that consumers in the U.S. are going to spend more than $6Billion on Internet video services by 2013. They admit that "consumption of premium internet video content to date has been low", however "the study is attributing the growth to more people owning connected gaming consoles, networked TVs and alternate video-on-demand settop boxes."

Let's sum this all up. Big companies like Sony and NBC are out making content exclusively for distribution through online properties, consumers are going to start spending piles of money on internet video services and more people are going to own connected gaming consoles, networked TVs and alternate VOD settop boxes. There's only ONE thing missing from the equation... how is the money going to be made? Well, here's my advice: don't worry about it. What YOU need to do is make content and projects that work in this new system, then find a way to use them. Build an audience. Once you have that, the rest will follow.
Posted by Dead Harvey at 9:00 AM