Dead Harvey Interviews Neil Kaplan: Creator and Writer of, "I, Of the Wolf" 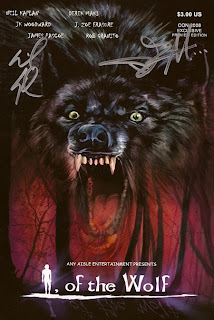 I've loved reading comics since childhood and will continue to love them until my sight goes, so it is with great enthusiasm that Dead Harvey adds indie comic artists to it banner.

Our first is with the creator and writer of, "I, Of the Wolf": Neil Kaplan.

Kaplan has an impressive body of work involving stand up comedy and voice overs for high level video game and animation projects. He was at comic con to promote the project this year in San Diego and will be at Dead Harvey's favorite bookstore (Dark Delicacies) on Sunday, Sept. 14th at 2pm to sign a copy of the premier issue so head on down to pick yourselves up a copy and help support indie comics!

DH: You have been the voice of Optimus Prime on "Transformers: Robots In Disguise" (which is f'ing awesome by the way) as well as various other animated characters. Tell us why you decided to switch mediums to horror comics and what inspired you to write, "I, Of the Wolf"?

NK: Hi Brad, thanks for your kind words. Yeah... playing Optimus Prime was a dream come true and a pretty awesome thing to have old high school friends find when they go to IMDB!

I don't so much think of myself as switching mediums as much as showing my true colors. If I had to choose a word to describe what I am I would say "storyteller." That's where the voices and the characters all come from. I did stand up at one point and I'm looking at getting back into it again, at least a little bit. I just like telling stories.

Heck, I have an educational TV series I have in development which will hopefully be on TV, mobile phones and in print eventually.

"I, of the Wolf" is a story I used to tell to friends, sort of a "campfire" thing.†Finally, in 2005, I was in Birmingham, England as the guest of honour (notice the†"u"†since it†WAS†the UK) at Auto Assembly along with amazingly talented comic book artists Simon Williams and Jason Cardy. After I told them the story Simon suggested we work together on a graphic novel version. As soon as I got back to the states the first person I looked up was†Derek Maki, a†friend that had successfully produced an award winning film and run a comic book store. I knew I had to have Derek on my team.

Hopefully, Derek and I will bring other stories to the public to follow this one.

Due to distance and health issues, Simon had to bow out. So, with his blessing Derek and I moved onward and we’ve been able to collect an amazing group of talented artists to bring this story to the page!

What inspired me? It’s pretty simple. My inspiration nine times out of ten is the same question. No matter what the story is, to me it usually starts with "What If?" (Likely my favorite comic book series EVER)

DH: What are your favorite horror comics out now and why?

NK: I don’t read comics as often as I did when I was in my teens and twenties. BUT, I really dig Occult Crimes Task Force. Tony Shasteen and David Atchison did such a wonderful job giving that book a very cinematic feel. (Though I guess it helps having a movie star as the main character.) I also really dig the world that Rosario Dawson created for her characters. To be honest, I don’t think I’ve ever read anything by David that I did not enjoy!

…and Painkiller Jane was a fun book a friend gave to me.

But then again there are two creators whose work never ceases to entertain and inspire me; Alan Moore and Jimmy Palmiotti. Those guys KNOW how to tell a story… and of course they bring with them the world’s finest visual artists!

DH: Now that you've worked in the literary and film medium, tell us which you prefer and why?

NK: Wow… well, I enjoy them both. They are both such distinct ways to tell a story. Oh, by the way… you forgot LIVE performance as well.

Honestly film work depends greatly upon how you are participating. Producing, directing, writing, acting, etc. They are ALL working from a different angle toward a shared goal.

DH: Describe your particular take on the werewolf.†
-
NK: Well, let’s just say this…
“What if the movies and the legends got it ALL wrong?”
“What if, at the rise of a full moon, a boy saw a wolf step from the woods… transform into a man… and commit a rather grizzly killing?”

That’s the tease in the first chapter… but it goes a LOT deeper than that. We address a LOT more in the book.

“Are the monsters in the world always the ones we think they are?”
“What is more important… who we are or who we seem to be?”

OH, and let me point out that there is a difference (in my mind) between Werewolves and Wolf/Men. It would seem that if a creature is a combination of human and wolf they are Werewolves. If however, they are either one or the other at differing times, they are a Wolf/Man. Oddly, in the movie “Wolf-Man” he was a werewolf and in “An American Werewolf in London” he was a Wolf/Man. – Funny how that works, huh?

DH: What were your primary influences behind the comic, "I, Of the Wolf"?

NK: All the old Lon Chaney movies, “What If?” comic books and “An American werewolf in London.”

DH: What does "I, Of the Wolf" have in store for us in the future?

NK: A few more rather disturbing deaths and/or violence. (Hey, I warned you it was for 14 and older)

We delve into the creation of the race. (Gee, haven’t YOU ever wondered where they came from and why they exist?)

The truth behind why they “walk among us” and what their true purpose is.

Another main character (or two) will fall before this story ends. And by the end Tom meets the monster that has plagued his life and changes the course of his life thereafter.

We also get introduced to another mythical race, which is mentioned in Chapter One: “Friends and Monsters” So, I actually give my interpretation to another race of beings that play an important role in this story.

DH: How long did it take to put the comic together and how did you raise the financing?

NK: Let’s just say three years so far and we are still seeking either a publisher or an investor(s) to become our partner(s).

DH: What advice do you have for people who have just finished a horror comic to get it out there on the market?

NK: Keep plugging away and you’ll find readers and a home. That is the beautiful thing about the internet, it really has opened up the Global Market to our creativity.

When things seem bleak, look at the team of people you have gathered to work with you. If you are lucky like I was, you get AMAZING artists AND human beings like I did.

J.K. Woodward, J. Zoe Frasure, Mike Pascoe, Rob Granito, Simon Williams and Jason Cardy!!! I mean, if my story was bad, these gifted people would NOT have joined my team… so, I guess I can relax about the story I am telling and just make this happen!

Believe in yourself, your ideas and your TEAM! Never forget that your story, whatever it is, is GOLD. But also remember, that some people seek platinum and jewels. It doesn’t mean they’re dopes or have no taste. It just means you are not compatible. OK… and move on.

DH: Tell us about your experience at Comic Con this year.

NK: Well, San Diego Comic Con was our “launch.” It was slow going, but those that came by were wonderful and many have written to tell me how much they liked Chapter One. We made great contacts, and the book ended up in the hands of some very talented people and publishers to review!

DH: What's next for Neil Kaplan?

NK: Completing the Graphic Novel and either finding a publisher or getting it to market ourselves. I am recording a fairly major voice on a game that should be HUGE… but who knows what will happen there.

I am working to create a company that will provide entertainment to our troops both serving and rehabilitating.

I have an educational TV show in development... screenplays being re-written.

I teach Voice Over to the sight impaired at the Braille Institute of Los Angeles… and I am trying to develop that into a nationwide program.

…and my NEXT Graphic Novel will be “Tsao Shun and the Night Patrol,” it’s your typical Vampire, Kung-Fu, Civil War Story. (I know… not ANOTHER one!??! Right?) One thing to ponder on that one… who hates the un-dead the most?

Wow Brad… I hope I have piqued your interest (as well as maybe a few hundred of your loyal readers!) Thanks for your time and interest! I hope you’ll really dig “I, of the Wolf.” If so… go to our site and let us know! We’d love to get a lot of hits and interest; www.iofthewolf.com.

If not… maybe you can blog about something else for a few days instead. :)
Posted by mr. toad at 1:00 PM