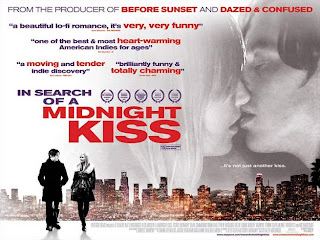 I just got back from Vegas, after doing a good stint of partying with the adult baby from "Evil Ever After". We returned to L.A. early to catch the premiere of a film he acted in called "In Search of a Midnight Kiss".

Usually, we here at Dead Harvey don't cover movies that aren't in the realm of indie horror. After all, no one gets slayed. There's no midgets and not a single boob shows up exposed on frame. However, this is a damn good movie, with excellent writing and acting and better yet, it was made on $12,000 and has attained theatrical distribution and has been selling to run theatrically overseas as well.

Awesome job to everyone involved! What you have accomplished is phenomenal. It will open doors for the world of independent cinema that haven't been opened before. Dead Harvey salutes you and sends your their support. Check out the website at: www.midnightkissmovie.com and see the movie at the theater to let them know indie movies deserve to be seen and they deserve to be seen on the big screen!
Posted by mr. toad at 11:00 PM