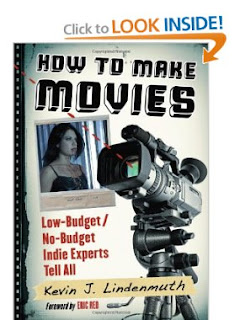 I was fortunate enough to be one of the filmmakers interviewed for Kevin Lindenmuth's new book: How to Make Movies: Low Budget/No Budget Indie Experts Tell All. I wrote about making movies from a micro-cinema standpoint, since that's all I've ever had the money to work with.

I did so because number one: I've always been poor and number two: I've heard countless horror stories of people who've sunk every dime they've had into their movies. They've mortgaged their houses and sacrificed nearly everything just to get their films made. Unfortunately, far more often than not, the result has very seldom resulted in a positive financial return.

The media fuels the Cinderella story. Everyone loves to hear about about the one filmmaker out of thousands that makes the next Blair Witch or Paranormal Activity. But, let's not forget. Those movies were nearly ten years apart. It's a big chunk of time before the next phenomenon comes along but every year there are thousands of truly independent films that slip through the cracks. As time goes by, they fade into obscurity. Many never even see the light of day.

What the media hides from us is what happens when an individual with a dream and extremely limited funds actually crosses the line that separates the thought of doing into actually doing. They, much like film school, fail to educate people about the brutal realities that exist when someone graduates and actually tries to make a living at this truly insane career path riddled with sharks, lies and bullshit. It's an absolute war zone. You're going to need adamantium skin and an every stronger sense of humor to survive. There's a reason Adam Sandler yells at that kid in Billy Madison and tells him to stay in school for as long as possible.

What I like so much about Lindenmuth's book is he's complied interviews from people who tell the brutal truth of just how hard it is to survive on the truly independent level. I thought I'd had some rough experiences until I read about what many of the other far more experienced filmmakers have been through. The book does a great job of illustrating how it's not about glamor. It's about doing what makes you happy. And if you're willing to go through hell to do that and live like one of L.A's many homeless and you still want to make another movie after you're done, it's a bittersweet satisfaction that no amount of fame or fortune could ever give you.

I'm happy to see that a book like this is finally available. I wish it was around when I was in film school because I had absolutely no idea what I was about to get myself into when I graduated.

You can pick up a copy here

A kindle version is also available...

My sincerest best wishes to anyone out there making movies on their own. You're fighting Han Solo odds, friends. Bless you all as you fight to keep the dream alive. 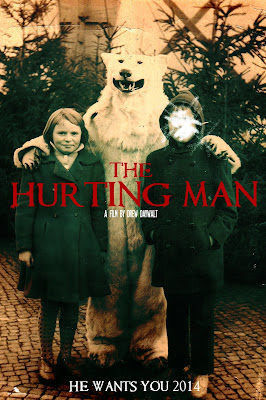 We've been in hibernation mode, as we're working on getting a few of our own projects off the ground...  and it was going to take big news for us to wake up out our slumber to post something.  Well, we've got big news.  Close friend of Dead Harvey, Drew Daywalt, has just inked a deal to bring one of his scripts to life and we couldn't be more excited for him!  Check out the art and here's the press release...

THE HURTING MAN follows the story of a police officer who tragically finds his family murdered after a failed 911 call and now must work to save their souls from a demonic boogieman haunting his childhood home.

“I wrote this script and kept it close to my chest,” says Daywalt, “ because this one was written from my own worst terrors, both as a parent of small children, and also tapping into my own childhood fears of a hideously costumed boogieman. This one’s going to scare the hell out of everyone. I promise. I can say that because it really scares me, and I’m letting my fear guide me on this one.”

Says Fessenden, "There's a certain kind of genuinely terrifying old-school-campfire scare that Daywalt gets right in his Fear Factory gems and I can't wait to see him nail those chills in a long form film."

Film goes into production this fall.

Daywalt, Fleischman & Fessenden are not commenting on cast yet, but promise something wonderful is in store for horror fans as well as everyone else.

While little else is known about the project, we have been informed from close sources that the terrifying boogeyman in this film will inspire iconic halloween costumes for years to come.

You can find out more about HURTING MAN, which goes into production this fall, on the film’s Facebook page at www.facebook.com/THEHURTINGMAN
Posted by Dead Harvey at 8:39 AM 12 comments: