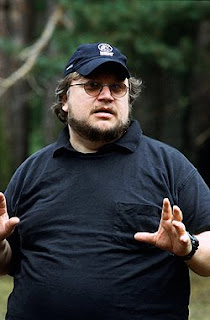 So much stuff going on out there! A few new projects announced on THR.com, some insight into the future of distribution, cool new integrated concepts and we're still waiting for OUR clip about "5 or Die". Should get here any time now...

Del Toro, Miramax not 'Afraid of the Dark' on THR.com: I always like reading the little Hollywood Reporter blurbs, as it gives you a bit of insight into how these big deals get done and where the players come from. Usually I hate it when they get ideas from old TV shows, but this first project is kind of cool. The idea comes from a cult show that ABC made in the 70's, they have a comic book artist-writer helming it and del Toro is producing with Miramax. Since I'm mentioning that one, here's another one from THR.com - 'Blood' work for 'Family Guy' scribe. I don't get why they would tap a showrunner from "Family Guy" to adapt a horror property, but maybe there's something I don't know. What's interesting is the fact that Hollywood is going ape-shit over comics these days. I gotta say, the idea behind "Last Blood" is awesome. "Human survivors of a zombie massacre find themselves protected by a band of vampires who need their blood to survive." F'ing awesome.

Viacom CEO: 'Great' content is king on Cnet News.com: Viacom's CEO, Philippe Dauman, spoke at the Fortune Brainstorm Tech Conference a little while ago and said some pretty interesting things about 'content'. Now, before I get into what he said, let me clarify something. Please do realize that what you're making, as an indie-horror filmmaker, is content. I think a lot of people make the mistake of thinking that what they're making is just a film. If you think of yourself as your own little studio and you're making content for distribution, you're going to open yourself up to a lot of new avenues. So, even though Viacom is a multi-national, billion dollar company, try to do what they do. So, what do they do and what did Dauman say? Well, they see themselves as a 'content producer' and they seek to find distribution any way they can and to make money any way they can, while looking to find new audiences thanks to emerging distribution. There you go...

Blockbuster adds Movielink's video downloads to Web site on DallasNews.com and LG Electronics Device To Deliver Movies Online on WSJ.com: The battle for delivering movies to your TV through your PC rages on... another article on Blockbuster finally using Movielink, a company they bought almost a year ago, to offer movies for people to download to their PC as soon as they're available for rent. The other article is how LG Electronics will soon offer a device that plays Blu-ray over the internet from Netflix. We already knew that LG and Netflix were partnering up, but both are really pushing the envelope and trying to open this whole market up. LG isn't really the big story here, it's really Netflix. It looks like both Blockbuster and Netflix are vying to be the new gatekeepers, as they're partnering up witheveryone they can find. Stay tuned to the battle... and don't forget that Microsoft, Nintendo and Sony are all in this fight, too.

Sci Fi Plotline to Play on TV and Video Game on promomagazine.com: I've been waiting to post comments on this article for a while... This is a pretty cool idea and this is the way filmmakers need to think as we delve forward into this new era of distribution. Basically, it's a series that's going to air on Sci-Fi, but it's also a video game that will follow the series. So, you basically play along with the series. I'm not saying that you should go out and copy this idea... what I'm saying is, think of ideas that use other mediums, think outside the box. Maybe you develop a series that has a huge online component, or that's based around live events, a CD release or a mobile campaign, I don't know. Basically, anything that uses other mediums and angles to compliment your project will gain you a bigger audience.

Speaking of ways to drum up interest about a project... a bunch of the horror sites all got sent a video clip called "5 or Die", which looks to be a viral campaign for something. Nice campaign... and a pretty cool way to build interest, as all the sites are talking about it. Including us, who, of course, had to find out about it by reading other sites... thanks "5 or Die" guys, that hurts. I guess our clip got lost in the mail? Whatever... here's a link to 'Icons of Fright' site, which shows the video AND all the sites that aren't called Dead Harvey that got sent the link.
Posted by Dead Harvey at 1:00 PM

xanax order no prescription xanax 0.5mg dosage - how much xanax and alcohol does it take to overdose

http://buytramadolonlinecool.com/#28875 tramadol for dogs vs people - can you buy tramadol in spain