Tales From the Micro-Cinema Crypt: "The Clown Incident" 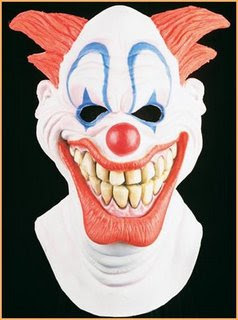 Ted has been doing all the work on the site for at least the past month while I've been out drinking, chasing midgets and acting all around irresponsible. So, I figured it was time for a new post before he gets too pissed off and actually sticks the pins in that voodoo doll he made of me.

I mean, the more we can pursue actual film making.

Alright, enough f'ing around. Here's a little tale of something that happened to me awhile back. I figured it was appropriate for Halloween time since it involves a clown suit.

The micro film world revolves around favors. Meaning, you have to somehow convince everyone to work for free while your already broke-ass spends money you don't even have so you can get your movie in the can. Needless to say, when someone works on your movie for free, it's more or less an unwritten rule that you return the favor. The favors can range anywhere from donating equipment to an unpaid crew position to far more bizarre territory.

In this instance, a friend of mine was making a mockumentary about a hit man's last days on the job before his retirement. The hit man was played by my friend that required the favor: a roughly 300 pound cat who's forte is frighteningly deliverence-esque redneck roles. The first scene I was in involved me playing one of the many thugs who meets their fate at the hands of said hit man's gun.

I was slain in the basement of an apartment building which we completely guerrilla-styled. Meaning, we ran around chasing each other with toy guns and air pistols that were painted to look like real firearms. My friend is a helluva guy and the shoot was a blast, but I was nervous as s because most of the neighbors had no idea what was going on. If the cops would have been called we most likely would have had a snuff film on our hands.

My friend approached me after the shoot and our conversation went something like this:

HIT MAN: Hey man, you did a great job getting shot and falling straight back into the cement. That was bad-ass!

HIT MAN: You didn't f yourself up or anything, right? We don't have insurance.

This I completely understood. We never have insurance on our movies either.

ME: No, it's cool man. The adrenaline counterbalanced any potential damage.

HIT MAN: Cool. How would you like to help me out with another scene?

ME: Sure, what you got going on?

HIT MAN: Yeah, man. Are you still in possession of that clown suit?

The clown suit in question is one my low-budget ass has used for Halloween and a few micro movies for about three years in a row. It was most recently featured in, "Psycho Sleepover", which I'll add is a fantastic new micro film we'll be featuring in an upcoming article.

At this point things we're starting to sound a little strange. Why the f do I always get myself involved in situations like this?

About a week later, there I was dressed in my clown suit and my friend's creepy ass clown mask. Why the f people think clowns are funny and get paid to entertain children is besides me.

HIT MAN: (nearly jumping up and down in excitement) Oh, man, this is gonna' be awesome! Alright, I've got about twenty minutes before she arrives. I'm going to go take a shower and prepare.

ME: Given the nature of the scene you're about to do, you should probably scrub your undercarriage.

HIT MAN: Why do you think I'm taking the shower? I even got a special soap just for the area in question. I might come out of that shower smelling like a bag of s but my crotch is going to come out like a rose garden.

ME: Good luck to you then.

My friend entered the shower and kept his word, spending a good twenty minutes on the area in question. When he exited the shower, the only thing he had on was his underwear. He held a rubber mat in front of his crotch.

ME: What the hell is that?

HIT MAN: I figured I'd be a gentleman and put it between our crotches. The inspiration comes from the groin thongs Sharon Stone and Michael Douglas wore when they boned down in, "Basic Instinct".

ME: That's not your car mat is it?

HIT MAN: Dude, have some class. This is totally different.

Next thing I knew I was pretending to act dead on the sleazy hotel bed and looking out the two eye holes of the clown mask in what can best be described as a Michael Myers POV before he kills his sister in the first ten minutes of, "Halloween".

There are many tests of a man's friendship. These can range anywhere from lending your car, to helping move, to helping bury a body in the desert. Then, there's playing dead in a clown suit and watching your friend f from a Michael Myers POV. This, I had never known existed before.

In the world of micro-cinema, all things are possible.
Posted by mr. toad at 9:00 AM

Many times people don't believe me when I tell them about how much you can make by taking paid surveys from home...

So I show them a video of myself getting paid over $500 for doing paid surveys.