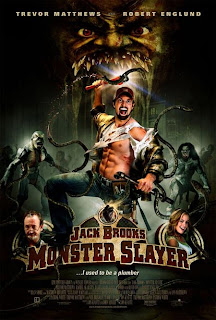 October is always a good month for horror... there was a pile of good films out last week and this week is no different. In fact, this week could be better than last week, if only for one title - Jack Brooks: Monster Slayer. It's another jam-packed week, so this post is long. As usual, if you want to help us out, please click on the title and buy the DVD off Amazon. Also, you can go to our Youtube page and check out all the trailers.

If you only see one new horror film from this week, please let it be "Jack Brooks: Monster Slayer". It's co-written and directed by Jon Knautz, with screenplay and story credits to John Ainslie and just story credits to Patrick White and Trevor Matthews, who also stars and produces. Personally, I think it's unreal... definitely one of the best of the year. It screened at something like 14 film festivals and walked away with Best Motion Picture at the Midnight X-Treme Program at Sitges and the Audience Award for Best Narrative Feature at the Calgary Underground Film Festival. It's the first feature film from a group of guys who got together to make short films and, well... they really hit it out of the park with this one. I don't know what to tell you, other than they landed Robert Englund, the monster effects are perfect, it's funny as shit and there's lots of blood. Without saying too much, it's a wicked throwback to when horror movies were a lot of fun. To quote Jovanka Vuckovic from Rue Morgue, "If Jack Brooks was made in the 80's, it would be a cult classic by now." Do yourself a favor and check this one out.

I was pleasantly surprised with the original "Feast", which was the horror film that was the result of Ben Affleck and Matt Damon's 'Project Greenlight'... I did think it was a little too reminiscent of the original "From Dusk Till Dawn", but who cares? It was successful enough and stood up to horror fans well enough to spawn two sequels, this one is called "Feast II: Sloppy Seconds

" and "Feast 3: The Happy Finish" is currently in production. This one's written by Patrick Melton and Marcus Dunstan and directed by John Gulager, which is the exact same team that brought you the first one. So, a bunch of indie filmmakers win 'Project Greenlight', then make a successful film and NOW, they're making two sequels? Awesome. Good work, guys. I haven't seen it yet, but I'll definitely be watching it soon.

I'm not really sure I want to even talk about M. Night Shyamalan's "The Happening

", but I will. What can I say about Shyamalan that hasn't already been said? He peaked with "Sixth Sense" and has never been able to get back there... I thought that his first R-rated film, this one, was another let down. If you can continue to call them 'let downs'... it's just what I expect from him. The only thing that really sucks is that it would be considered a box-office success, in that it had a budget of $60Million and grossed over $160Million Worldwide. Guess what that means? There's another Shyamalan let down coming your way soon.

" comes out of the UK and it's from writer, producer, director and editor Adam Mason. This is one of those films that could only come out of the UK, as no US financier would put money towards it... and I mean that because I'm disappointed that I don't see more films like this. "The Devil's Chair" is an extremely gory, f'ed up film about a guy who gets a bunch of drugs and takes his girlfriend out to get messed up and have some sex. However, when they explore an abandoned asylum, their drugged-out bliss turns into agony and despair. Here's an actual quote about the film... it's "a tale of a simple man fucked over by demons that are not just in his mind". Check out the trailer, you'll want to see it. Trust me.

The original "Joy Ride", starring Paul Walker and Steve Zahn, directed by John Dahl, was another film that ended up being a pleasant surprise for me. I definitely wasn't expecting something as good as what I got. Now, because it was pretty good, we get "Joy Ride 2: Dead Ahead

", which has no real big names attached and is directed by Louis Morneau, who also made "The Hitcher II: I've Been Waiting" and "Carnosaur 2". The big let down about "Joy Ride 2" is that Ted Levine, who did the voice for 'Rusty Nail', does not return to reprise his role... and I thought he kind of made the first one.

" is an indie horror from Jim Torres, who has only one other film to his credit with "SadoMannequin"... which I now have to see, just because of the title. "20 Years After" won him 3 awards, two from the George Lindsey UNA Film Festival (the Clyde "Sappo" Black Sweet Home Alabama Award and the Gold Lion) and the Robert Rodriquez Award from the Hollywood MiniDV Festival. It's an ambitious, post-apocalyptic story that takes place "twenty years after the bombs fell and the plagues ran their course" where "the few that remain live in fear and without hope". Even though it's a "by the book low-budget horror", he managed to wrangle up a few actors of note, including Azura Skye, who was in "28 Days" and "One Missed Call", as well as Nathan Baesel from "Behind the Mask: The Rise of Leslie Vernon".

" was directed by Zach Passero and was written by Chris Sivertson, while the screenplay was written by Adam Rockoff. It's got some great cameos in it, including: Tim "The Dollman" Thomerson and Troma Alum - Will Keenan. It's about four women who go on a road trip, but two clans of deranged men follow them... however, even though the girls appear to be easy prey, come midnight... all hell breaks loose and the tables are turned.

"Return of the Curse

" is an indie horror from Dog Byte Video, written and directed by Chris Penney. Now, I'm not sure if it's called "Return of the Curse" or "Diary of a Female Assasin", which they refer to a lot on their website. Either way, it's as indie as it gets and it was filmed in Grand Rapids, Michigan. The film is about an evil curse that's been passed down from generation to generation, making those infected lose their sanity which leads to their horrific demise. It looks interesting and I'm going to try to find out more about the film and Dog Byte... so, stay tuned.

I haven't seen "Beneath The Surface

", but it looks interesting for a few reasons. First off, the plot sounds very intriguing - "By uncovering a world thought only to exist in his imagination, Ethan brings the love of his life back from the dead in order to clear her name and expose the truth behind her apparent suicide. However, he did not expect the chaos that would come back with her as well". Beyond that, it's written, directed, produced and edited by Blake Reigle, who's been involved in some very interesting projects, including being an assistant on both the new "Friday the 13th" and the new "The Last House on the Left". He's also producing a film called "His Name Was Jason: 30 Years of Friday the 13th". So, he's obviously a fan and knows his stuff... I'll look forward to finding out more about this project.

"Prey for the Beast

" is from Brett Kelly, who's been involved in some pretty interesting projects. He's acted in a ton of movies, including "Goregoyles 2" and "The Bonesetter", he's also written a bunch of films, including "Good Dog, Dead Dog" (which he also directed) and "My Dead Girlfriend". This film, however, he directed, but did not write. It's written by Jeff O'Brien, whose collaborated with Kelly before. "Prey for the Beast" is about a group of dudes who meet up with a group of sexy hikers and them become prey for a predatory animal that's on the hunt.

Honestly, Lloyd Kaufman's reach knows no bounds. Even though he's based in New York, he managed to get his voice into the Australian made "Dead Country

". What I do like about Lloyd is that he offers his talents to films that are 'Troma-like'. So, when you see Lloyd in the credits, you know what you're in store for. And this looks to be just what you would expect. It's written by Anthony Davis, Clifford Hoeft and Kaye Redhead and it's directed by Andrew Merkelbach. It's about a space ship that explodes above a small rural town, showering the population with a deadly alien virus that spreads a zombie plague upon the town folk.

" is directed by Melanie Orr, who also directed "Grindstone Road" and "Harm's Way". It was written by James A McLean and stars Stephen Rea, whose made a rash of horror films lately, such as "Stuck", "The Reaping" and "Metamorphosis", which is currently being filmed. "The Devil's Mercy" is about a family that moves to Connecticut and their kid becomes increasingly anxious around the new downstairs neighbours. They dismiss it as an overactive imagination, but it turns out that their may be something a little more sinister going on down there...

I can't find out much about "Super Hell

", which is directed by Johny Walker and stars b-movie legend, Conrad Brooks... who was in the original "Plan 9 from Outers Space", as well as other Ed Wood films, like "Glen or Glenda". He's had a long career of being in b-horror and has recently shown up in a whole S-load of micro-cinema horror films. He'll also appear in the remake of "Plan 9", which is in pre-production right now... talk about closing the circle. "Super Hell" is about the dead coming back to life, while Satan walks the earth and good people have become murderous filth... playing out their perverse and sinful desires. We follow along with Conrad Brooks as his depravity steers him towards the most insane vampire to ever stalk the screen.
Posted by Dead Harvey at 9:00 AM