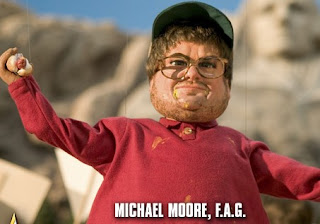 I used to actually link to a lot of horror fan shit in the past, but I've started to just link to things going on in the industry that I think will interest indie filmmakers... as well as stuff that I think indie filmmakers need to know about. Anyhow, today is no different. There's just too many changes going on in the industry to not comment or look into.

Michael Moore to release film online for free on msnbc.com: I'm not a big Michael Moore fan. Let me just get that out there... and it has nothing to do with his political stance, it's more his stance as a filmmaker. I don't want to get into a debate on it, but I think he's fantastic at getting his point across, which makes him a great filmmaker; but piss-poor at getting the truth across, which makes him a shitty documentary filmmaker. Now, having got that off my chest, let's give a bit of free promotion to "Slacker Uprising", his next film. His last film, "Sicko", was pirated very early and every torrent site had it 3 weeks before it came out in the theaters. Knowing that, he's releasing "Slacker Uprising" for free, for three weeks, as a free download beginning Sept. 23 and he claims it's gift to his fans. Go to slackeruprising.com and sign up, you can download it after a few clicks. However, here's the thing. Nothing's for free... and I see what he's doing here, but it works out well for you, the audience. First off, he probably has some deal with bliptv.com, they are the guys who are distributing it. They're going to get a bunch of traffic, so I'm sure they paid something. Also, I think he looks at this as a loss-leader. When you sign up, he asks you to punch in the email addresses of friends who may be interested. So, he gives away the film for free, but at the end of the day he gets a massive database of fans that he can now email, spew his rhetoric on and sell other shit to. I have other thoughts here, but I'll save them... Any way you slice it, interesting concept and delivery.

SanDisk rolls out new medium for music on SFGate.com: Ever heard of a company called SanDisk? You probably have, you just don't know why... SanDisk is a California based company that "designs, develops, markets and manufactures products and solutions in a variety of form factors using its flash memory, controller and firmware technologies." Yeah, so, they're a tech company that specializes in flash memory (meaning that no power is needed to maintain the information, it has faster access times and it's REALLY shock resistant. Translated, it's perfect for portable devices). Now, here's why they're an interesting company... they're partnering up with some of the biggest music labels to create a new music medium based on its microSD cards and it'll feature full-length, pre-loaded albums and additional content. They call it slotMusic AND it's going to be compatible with more than "a billion cell phones, MP3 Players, PCs and game consoles". So, as an indie filmmaker, why should you care? I'll tell you why. The first version of the microSD card will sell with 1GB of storage, with future models having up to 8GB of storage. What's that mean? That means movies are next. So, let's see here... if your movie could be distributed on a microsSD card, you just opened yourself up to a billion potential new devices for your film to be watched on. Yeah, I'd say that's significant. Between online distribution, DVD releases, VOD and now stuff like this... really, why are you still thinking about a theatrical release? Think EYEBALLS... so many eyeballs.

Coming Soon From Paramount Pictures: Digital Feature Films on adage.com: I've stopped keeping track of all the mainstream Hollywood people who are now venturing into web-based projects, but you can now add Paramount to that list. Like I've said a thousand times, the best part about these guys rolling out projects like this, is that you can watch what they do, how they do it and figure out what worked for them and mimic them. By Paramount Digital's own admission (in a round-about way), they don't know how to release this shit, but they're going to try a few different ways, including: "free, sponsor-supported, subscription and via paid download". So, let them spend the money testing it out, then figure out what worked for them and do that.

Q&A: JJ Abrams Talks 'Fringe' on Forbes.com: This is a wicked little interview with JJ Abrams about his new show "Fringe", which I'm starting to waver on a bit... but that doesn't take away from the concept, marketing and everything behind the show. But, am I the only guy who's waiting for something kick-ass to happen? Start tying shit together, already! Anyhow, it's cool to see what the thought process is like for a guy like Abrams, who could probably get anything green-lit that he wants. It's little interviews like this, that you need to soak about and think about next time you're putting together your own project.
Posted by Dead Harvey at 9:00 AM

eToro is the #1 forex broker for new and professional traders.