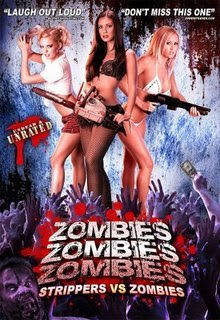 I think it's safe to say that between Brad and myself, we see more indie-horror than your average filmgoer... granted, I've talked to a few film festival directors who may have us beat, but (and I quote Nic Cage from "Leaving Las Vegas") they do it because they HAVE to, I do it because I WANT to. Nothing like comparing a raging alcoholic and indie-horror, but I digress... Either way, having watched a lot of them, plus getting to talk to a lot of the filmmakers, you start to learn what you like, what the general fan may like and how the films may do on the market. Of course there are exceptions to every rule, but I find that a good amount of gore, a bunch of nudity and a sense of humor never hurts an indie-horror film.

That brings us to "Zombies! Zombies! Zombies! Strippers vs. Zombies" from Jason Murphy. Not only does it skillfully combine all the above mentioned elements that I love about indie-horror, it, plain and simple, kicked ass at it. If you're looking for a good time in an indie-horror film, it's a film for you. Brad had the chance to discuss the film with him and, as usual, you get a lot of insight into how he got the film made.

Tell us about your background and what made you decide to get into film making.

Well. I have pretty much wanted to make movies my whole life. I never wanted to be a firefighter or police officer or anything like that...it was always something in movies. In high school, my friends and I always made little movies and were in the "video club", and all that geeky stuff. As for what made me want to get into it...I'm not really sure. I do remember watching tons of horror movies with my Dad when I was young, and I was always fascinated by the special effects. I think that may have had something to do with it.

Yes, I did go to film school, right after high school. That was more than a few years ago though. I learned a lot, and had a great time.

What are the film/directors that have had the most influence on you?

As with many aspiring filmmakers in this genre, Sam Raimi and Peter Jackson were my favorite directors back in the day. I think it is funny that these 2 horror directors have now moved up to become some of the biggest directors in Hollywood. I'm a big fan of the comedy-horror genre, and those guys always did it exceptionally well. 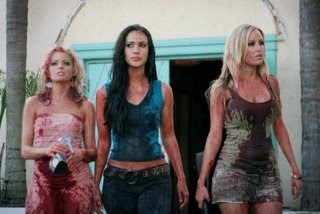 My partner Tony G. had been trying to come up with a zombie movie idea for us to make, and he and our friend Zack came up with the title "Crack Whore Zombies"...about a group of crack whores who get turned into zombies by tainted crack, and attack the local strip club. I thought that the crack whore part may turn off alot of people who we needed to help us, like the city film commission, etc..so as a temporary title, we used "Zombies Zombies Zombies" while filming. Plus, we had really pushed the script to focus on the strippers more than the crack whores anyway.

After a while, it just stuck. Plus, our distributors told us that most stores wouldn't carry the movie with "crack whore" in the title.

There's a little movie coming out starring Jenna Jameson called, "Stripper Zombies". Is there any connection?

Nope...no connection. We actually shot our movie a few months before we found out that they started shooting. We were pretty bummed actually, because once they came along, our movie lost a lot of it's hype. We are just a couple of guys who used our credit cards to make a movie...we can't compete with them...they had about 10 times as much money, bigger stars, and a huge marketing campaign budget from Sony. We just had a myspace page and maxed out credit cards.

What elements, do you feel best combine to make a great movie?

there are no elements that are definite when trying to make a great movie..."great" is a very subjective thing. What one person may love, another will hate. In general, you need a good story and characters that people either like, or hate. I just try to make a movie that is enjoyable for me, and the fans it is made for. Sometimes it works, sometimes it doesn't. There are tons of things I want to do in future movies that I wasn't able to do in my first movie.

Well, on this movie my approach was a little different than normal. We shot the entire movie in 9 days, so my approach was pretty much "what do we need tot make this work and move on to the next scene?"

In general though, I think it is very important for everyone to have a good time. Everyone on the crew is important, and everyone should be having fun...otherwise, everyone will be miserable, and I think that sometimes shows in the final product. 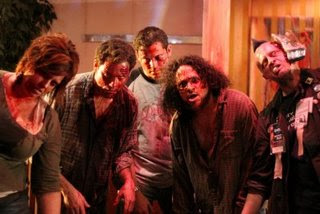 There are some really well done gore effects in the movie. Which are you most proud of and how were they accomplished?

What challenges were you faced with in making the film and how did you overcome them?

We had tons of challenges, mostly due to the $30,000 budget. The biggest challenge was probably dealing with all the things that happen at the last minute. We had locations drop out the day before shooting was scheduled to begin...fx that didn't work as planned...extras who didn't show up...the power got turned off a few hours before shooting one day.

When you are making a movie for this kind of budget, and on this type of schedule, you just have to be able to roll with the punches and keep the train moving. We just had to do whatever we could to make things work...which usually involved changing the script to work with what we had.

How has the distribution been going? Any tips you can give to people looking to get their movie out there?

Distribution is HARD! When I think about it....making the movie was pretty easy compared to getting distribution. Most of the big distributors turned us down due to the low-budget and the fact that Sony had such a similar themed project. We were able to sell a lot of the foreign territories ourselves though, and got our money back pretty quickly through that. For US though, it has been a struggle to get stores to put it on the shelf. Everyone seems to think that the zombie market is too saturated, so they won't take a risk picking up a low-budget zombie movie right now. We hope that when they see how well we are doing, that they will change their mind and give us a chance...but who knows. We are doing really well with online sales, and are available online with most of the big retailers like Best Buy, Circuit City, Borders, Netflix, and Blockbuster.com.

or other online retailers.
Posted by Dead Harvey at 10:00 AM

I have just downloaded iStripper, and now I enjoy having the hottest virtual strippers strip-teasing on my taskbar.