New Horror Out On DVD This Week, Including Trailer Park of Terror! 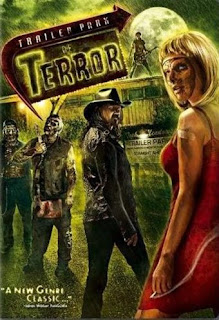 Surprisingly, there's not a ton of new horror films coming out this week, although with "Poultrygeist" and "Zombie Strippers" coming out next week, I anticipate NEXT week to be pretty big. Either way, that's a week away... let's concentrate on this week. "The Strangers" is the biggest film of the week, but for our purposes, I'm going to declare "Trailer Park of Terror" as the pick of the week. So, here's a bit of info on what's coming out... and if you're planning on buying them, why not help us out a bit by clicking on the titles and buying them off Amazon, through us? Also, feel free to go over to our Youtube page and check out all the trailers.

Like I said, for us, the big release of the week is "Trailer Park of Terror

", which was based on the Imperium Comics title and is written by Timothy Dolan and directed by Steven Goldmann. It had a wicked run at the horror festivals and has lots of good buzz around it... the story revolves around Norma, a "damned redneck reaper with a killer body who dispenses vengeance and death aided by her cursed companions, a bloodthirsty brook of Undead trailer trash". Really, I'm not sure what else I can add to that. Like, after reading that, I think you get a pretty good idea of what you're in store for. Having said that, you should know that the FX and gore are unreal and there's a lot of it to go around.

So, although a step down from "Trailer Park of Terror" in our minds, "The Strangers

" would definitely be the biggest Hollywood horror release of the week. Written and directed by Bryan Bertino, is stars Liv Tyler and Scott Speedman. By Hollywood standards, it had the fairly modest budget of $9Million and since it grossed close to $21Million in its opening weekend, it would be considered a box office success. "The Strangers" continues on that whole home invasion theme that we've been seeing lately in films like "Them" and "Funny Games", although "The Strangers" probably gets the award for creepiest invaders. Apparently the film is inspired by an event from the director's childhood, where a stranger came to his home asking for someone who wasn't there... but he didn't mention if that stranger wore a bag on his head and beat the fuck out his Mom and Dad. Anyhow, as you can guess, since it was a box office success, Rogue Pictures has confirmed that there is a sequel in the works.

Tokyo Shock, the guys who distribute Japanese horror/shock films to North America are coming out with the 2-Pack, "Taxi Tonight & Diecovery

". "Diecovery" is about a couple that goes on their honeymoon in a remote part of Thailand, where they encounter a restless spirit that's been unable to seek revenge from being brutally murdered 25 years before. "Taxi Tonight" is a Thai horror-comedy about a penniless, would-be taxi-driver, who purchases a used vehicle to hire out patrons... however, the cab is possessed by a host of evil spirits.

". Now, to be honest, I KNOW that "Blood Sisters" and "Camp Blood" are produced by David Sterling (they're a couple of low-budget classics), but I can't find ANY information on "Apartment 51 - Devil Bat". I'm just assuming it's from him... or associated with him, as there's no way that two different people are releasing 3D versions of camp films on the same week. However, I've been wrong before. If someone can (or wants to) correct me, please do.

I also want to mention the "Paul Naschy Collection

", for those readers that may actually study horror or be interested in the origins of horror. Naschy is probably best known for playing the werewolf Waldemar Daninsky, having played him in 12 films. He also played a hunchback, Dracula and a mummy. He's basically the Spanish version of Lon Chaney. This collection contains "Exorcism", "Blue Eyes of the Broken Doll", "Human Beasts", "Horror Rises from the Tomb" and "Vengeance of the Zombies".
Posted by Dead Harvey at 9:00 AM