Interview With Jim And Chris of The Phoenix Fear Film Fest 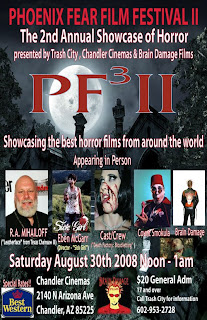 When talking to filmmakers, the second most asked question we get is about the film festivals. We do think they're one of the most important ways for filmmakers to get exposure and we usually cover off a few festivals or conventions every Friday, but we've started doing something that I think is far more useful to filmmakers. We're actually talking with the festival directors and founders and getting you some real insight into the indie horror festival scene. This time around, we talk to Chris and Jim, the guys behind The Phoenix Fear Film Festival...

The Phoenix Fear Film Festival is one of the best of the year and what we really like about it is that it's really all about indie-horror. They're going into their third year now and they've screened tons of wicked indie films. If you're thinking of entering or attending a festival, you gotta read this.

Please tell us a bit about yourself… how'd you get into indie horror?

Chris: I've always been into horror movies since childhood. My favorite films were the low budget because sometimes there were some real gems to be found in the less-than-mainstream projects put together by people with a lot of heart and no money.

Jim: I grew up in the UK during the 80's, when the 'video nasty' scare was in full swing - telling me I'm not allowed to see a film, is the best way to get me interested in it! But Re-Animator was probably the first film I saw that really opened my eyes to the possibilities of the genre. Though before that, growing up I was always a fan of Hammer and their work.

Tell us a bit about The Phoenix Fear Film Fest… when and why did it get started?

We've always wanted to have a film festival, I remember talking about it when we first met, how great it would be to have a venue where we could have several things going on at once and always, a film festival was one of the events. Every time we go to a film festival, we inevitably critique it a little, talking about how different (or the same) we would do it if it were ours. When we had the opportunity to do it, we jumped in head first. We learned a lot!! And I'm sure we'll continue to learn even more with each festival we do.

The most important thing, in our experience, to a film maker, is to have their hard work seen. Point in fact, we had film makers drive from San Diego to Phoenix for our film festival just for the moment when they can see all their hard work, all their efforts, on a big screen, with an audience watching it. It is a very satisfying moment, from a film maker's perspective. Obviously, there's also the possibility to have it distributed, nationally and worldwide, or the possibility of this leading to other projects that will be paid for by someone else, is a dream come true.

You get to see your movie screened on a big screen with an audience of genre film goers watching it. That's something which would cost you hundreds of dollars to arrange yourself, but we deliberately keep our entry fees as low as possible - frankly, if we break even, that's all we want, Of course, not everyone will have the same vision of your work: some won't like it all, then some may love it! There is also the possibility your film will win one of the awards we present, based on audience and judge selections, which means that your film will get worldwide distribution. That will get you the respect of your peers - and a neat trophy!!!

Basically, it's the opportunity to watch brand new films, often never before seen, and in many case, films that will never be on the big screen again - and you'll be able to say you saw it here. You can meet and greet the film makers, old and new, famous and not, up close and personal. You can chat with them one on one about film making and their visions, buy merchandise and hang out with like-minded people. It's an all day event concentrating on the horror film and its makers, and you're in the middle of it.

When you're accepting films, what are you looking for?

Chris: I look for originality, I look for good story lines. I look at the feel of the film, the atmosphere, the cinematography, the film as a whole as well as any interesting tidbits inside the making of it that would make this film original, edgy and smart.

Jim: Did I enjoy the film? That's really the key for me. Of course, the word "enjoy" covers a huge range of territory, but the worst sin a film can commit in my opinion is to be dull. I don't need a killing every five minutes, but if a movie is not capable of holding my attention... Well, I'm pretty tolerant [I am the only person I know who can offer a straight-faced defense of Showgirls!], so that probably means it won't hold an audience's attention either.

Chris: As the festival directors, and the persons who have to sit there for months before the actual event and screen all these submissions, the ones we like the most are the ones that give us the most information. A press kit with lots of good photos, bios of cast/crew, interesting anecdotes about the making of this film. All these things create a package that is a pleasure to watch and critique honestly. The more information we have, the better it will be for the film maker.

Jim: It'd be wrong for a film-maker to pander towards the festival circuit when making their film - especially at our event, there is no such things as 'festival friendly', as we're more concerned about whether it's a good movie. That said... Though I must admit, when it comes to short films, we'd rather show three ten-minute movies than one thirty-minute one.

Are there any particular success stories from films that screened at The Phoenix Fear Film Fest?

At our first Phoenix Fear Film Festival, the film CareGiver was awarded best feature, and that film has gone on to worldwide distribution as did "The Great American Snuff Film" - that screened out of competition, but its world premiere was at our festival and is also being distributed worldwide. We're very proud of that. This year's film festival showed great promise with the best feature award going to "Sick Girl" and we know that film will do great things simply because of its "in your face" attitude that you cannot turn away from. Director Eben McGarr has a powerhouse of a film there, that we are very proud to have screened at our festival. It's a great satisfaction for us to see good films finally getting the attention they deserve, instead of having one little bang in a theatre and are never heard from again. We feel as though we had a hand in that, and it's a wonderful feeling knowing that we won't be the only ones to see this diamond in the rough.

Chris: Do what your heart tells you. Pour your blood, sweat and tears into your projects, make them yours. What makes a good horror movie, or any type of genre film for that matter, are films that are made from good stories, good directing, good camera work and great special effects. None of which are possible without a lot of hard work. In the end, it will be worth it. Many blockbuster film makers of today, started out with Super 8 cameras, doing stop motion animation with their GI Joes and kept at it until they finally became who they are today.

Jim: There's no substitute for getting out there and making movies, Having been involved in that process at just about every stage, we know how much work is involved, but every day brings more experience. The more you have, the better you get - even if it's not on a horror film, the principles of cinema are still the same.

Chris: With the way technology is going, it won't be easy to tell the super high budget films from the indies. CGI, Hi Definition and computers are letting the regular film maker, with a creative mind, to make films that are just as beautiful as the big studios. It would be interesting to see what else is out there, now that you can pretty much make a movie on your own, without spending months pitching to financiers. It has now become a matter of who is more creative, mentally.

Jim: As Chris says, making a movie is no longer the hard part. Right now, the issue is much more distribution - how do you get your work out there to be seen? That's going to be the next great leap forward, when video on demand and Internet streaming replace hard copies of films, allowing makers to bypass the need for distributors and sell their work directly to the public. That should offer great opportunities for the truly independent maker.

What's next for you and the Phoenix Fear Film Fest?

A break! It always takes a couple of months after the event before we can smell popcorn without throwing up. But then, we recover, and start thinking about how we can make the next one even better. So we are looking forward to the next PFFF - sometime in Fall/Winter 2009 - and the next generation of film makers.

Where can people find out more about The Phoenix Fear Film Fest and how can they go about entering their film?