New Horror Out On DVD This Week, including the first must-see Troma film in years... 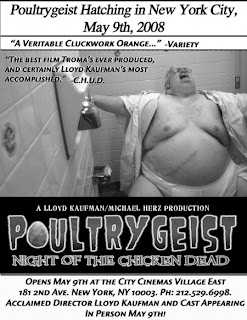 It's the week leading up to Halloween and, of course, there's tons of crap being rereleased this week. However, if you trim the fat, there's a bunch of wicked indie horror films coming out this week, including Troma's latest "Poultrygeist: Night of the Chicken Dead", which is an absolute must see. Anyhow, if you're looking to buy the films, please do us a favor and click on the titles and buy them off Amazon, through us. Also, as usual, you can go to our Youtube page and check out all the trailers.

So, if you're a regular reader of the site, chances are you know all about Troma and Lloyd Kaufman. Hell, if you're a regular reader, there's a distinct possibility that you've met Lloyd Kaufman. I believe the story goes something like this... The storied indie studio, Troma, was on the verge of bankruptcy and Lloyd dumped everything he had into this film, banking on it to save him. And, in fact, today's released "Poultrygeist: Night of the Chicken Dead

", did just that. It's being hailed as 'the best film Troma's ever produced, and certainly Lloyd Kaufman's most accomplished'. Now, that's saying a lot... but, I gotta say, it's true! It's a musical horror-comedy and I'm not going to get into the plot, as it's classic Troma. However, I will offer up that it poses the question, "Will Arbie and his friends be able to survive the wrath of the chicken-Indian zombies?" The reviews really are good and when it made its New York City premiere on May 9th, 2008, it had the second highest per-screen average ticket sales of the week in the city, doubling the per-screen averages of competitor "Speed Racer", but coming in just short of "Iron Man". What else can I say? You gotta see it to believe it...

"13 Hours in a Warehouse

", written and directed by Dav Kaufman, won the gold award for best Fantasy/Horror film at WorldFest Houston. There's a definite nod to "Reservoir Dogs", as it's about 5 criminals that are holed up in a warehouse with a hostage and there's plenty of shit-talking, back stabbing and witty banter. However, the twist here is that the warehouse is haunted. For a low-budget indie horror, Kaufman does a great job. They create some great effects, they do a decent job on the acting and it's shot really, really professionally. I just saw it over the weekend and I'm really intrigued as to the budget and how they made it, so I may be looking further into this one...

I'm not sure I should call "Zombie Strippers

" a 'highly anticipated' film, but a lot of people have been waiting for it. Seriously, how can you not be interested? It stars Robert Englund, Jenna Jameson, her boyfriend, Tito Ortiz AND it's about strippers who turn into zombies. It's written and directed by Jay Lee, who also wrote and directed "The Slaughter" from a few years back... Believe it or not, "Zombie Strippers" was actually based on the French existential Theatre of the Absurd play "Rhinoceros" by Eugene Ionesco... However, the reviews have been less than positive, but that could just be what happens when mainstream critics get to watch camp films. I mean, Richard Roeper of Ebert & Roeper checked it out and said that "it doesn't work as low budget crap". My response to that would be, how much "low budget crap" has he really seen? I've seen a lot and I have to say, you don't know low-budget crap, so don't talk about low budget crap... in fact, stay out of low budget crap, 'cause you don't understand low budget crap. Anyhow, I haven't seen it yet, but how bad could a film with Jenna Jameson about strippers and zombies be? Really?

I'm a big fan of 'out of the box' projects where people try something new and different... "Slumber Party Slaughterhouse: The DVD Game

" definitely fits the bill. There is a story to it, but it's basically an interactive, indie horror game. I'll save you the whole Paul Tard getting electrocuted in the bathtub while watching internet porn backstory, to get to the part where he sells his soul to a demon in exchange for the power to take revenge on his former friends. His power comes from YOU answering slasher movie trivia questions that the demon asks. It's a cool project and it comes from indie horror label, Halo-8 films. The game stars a bunch of indie horror scream queens, including: Tiffany Shepis, Joanna Angel, Melissa Bacelar, Katie Nisa and Masuimi Max and was directed by various Halo-8 films directors, including: Matt Pizzolo, Doug Sakmann, Ramzi Abed, Kurly Tlapoyawa and Joanna Angel.

"Weird Tale Collection, Vol. 1: The Yellow Sign and Others

" is a bunch of adaptations of horror author, Robert W. Chambers', work, including Aaron Vanek's award winning short feature film inspired by the short story, "The Yellow Sign". I can't say I know much more than that, as I've never heard of Robert W. Chambers OR Aaron Vanek... but that doesn't mean much, there's lots of people that I've never heard of. Anyhow, it's released by Microcinema and it's very indie horror, which is enough for me to mention it.

I'm not really a huge H.P. Lovecraft fan... and I don't mean to say that I'm anti-Lovecraft, I just really don't know that much about him. So, as there is yet another collection coming out based on his works, "The H.P. Lovecraft Collection, Vol. 5: Strange Aeons

", I'll take this opportunity to find out a bit about him, for both my sake and yours. So, let's see... he was born in 1890 and died in 1937 at the ripe old age of 47. He was an author of horror, fantasy and sci-fi, which was just known as 'weird fiction', at the time. His major inspiration and invention was cosmic horror, which was basically the idea that life is incomprehensible to human minds and that the universe is fundamentally alien. His "Cthulhu Mythos", as well as his "Necronomicon" series, gained him a huge cult following. However, his readership was quite limited during his life and his reputation has grown since his death and he is now commonly regarded as one of the most influential horror writers of the 20th century, frequently being compared to Edgar Allan Poe. Most current masters of horror, including Clive Barker, Stephen King, John Carpenter, Stuart Gordon, etc consider him a major influence and his work can be found in everything from TV, to films, to video games... so, if you're into the horror history, check out this collection and other collections on him.

Unfortunately, I'm running out of time here, but I wanted to quickly touch on a couple of films that are also coming out this week. There's "Shiver

", a Spanish film from Isidro Ortiz and the producers of "Pans Labyrinth"... and the indie horror, "Cannibal Taboo

" from Mike Tristano. Sorry, I gotta get going and I don't have time to look into them, even though they both look pretty good!
Posted by Dead Harvey at 9:30 AM

If you do manage to get/see my "Yellow Sign" movie, let me know what you think (good, bad, or ugly?)

PS-Chambers was a contemporary of Lovecraft, his stories influenced HPL. I've made a bunch of Lovecraft films, then picked a Chambers one. Strangely enough, Chambers had movies made about his works way back in the day, whereas Lovecraft had to die first before people noticed him.

There's a 15 minute documentary about Chambers on the Weird Tales DVD that should answer your questions.

Hey Aaron, I'd love to get my hands on a copy. Email me at ted@deadharvey.com.