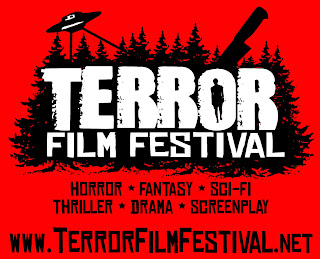 I think we can agree that horror, as a genre, kinda peaks in October... and, really, it's with good reason. We're getting into Fall, where everything dies and it's the month that's got Halloween in it... and that's a pretty scary holiday. Anyhow, on top of all that, it also has the most horror film releases and horror film festivals. So, if you're into horror, it's a pretty damned good month. Last week, alone, had at least 7 festivals and conferences going on somewhere and some of those were among the best festivals of the year. One that happened to be last week and definitely makes the cut for 'one of the best' is The Terror Film Festival in Philly.

The Terror Film Festival took place from October 21 - 25 in Philadelphia, PA this year and, really, it's one of the best, if not THE best film festival for indie horror. There's a lot that they do for you, the filmmaker, that no other festival does. However, I'm not going to tell you about it... I'm going to let "Claw", the Terror Film Festival Director tell you about it.

Please tell us a bit about yourselves… how’d you get into indie horror?

We're just indie filmmakers who love horror films (plus other genres). And we got into it by simply wanting to shoot a movie. And then another, and then another, etc. And here we are.

Tell us a bit about TFF… when and why did it get started?

It got started in 2006 because we wanted to start bringing credit and recognition to indie filmmakers in these genres. Most people don't realize it, but genre films make up most of the box office revenue in the world. They make billions of dollars.

Well, I don't know much about other film festivals. We're kinda in a bubble here at TFF. We don't compete with other fests and we don't concern ourselves with how the other fests run. And we don't do it for money's sake. We're TRUE horror fans at TFF (Halloween, Candyman, Hitchcock, etc). And we run it all from our own creativity and only do what we feel is good for the filmmakers and screenwriters. I don't know what other fests offer, but I do know that our website gets a lot of traffic from them. But regardless, we bust our butts for the filmmakers and screenwriters. We honestly know every piece of their project. Plus, we've pioneered a LOT of original concepts that no other fests have ever done. Such as, we list the Submitted films and screenplays on our website with links to their websites. No one's EVER done that before. They're starting to now, but they're just copying our moves really. And we also work on getting people deals and ask for nothing in return. No percentage. No one else does that either. And then there's Princess Horror. No one else has ever had a cool, sexy spokesperson. Of course now they're springing up at other fests and horror corporations, but none of them even comes close to Princess Horror. She's one of a kind for many, many reasons. And she's not an actress trying to make it, and she's not a marketing gimmick. She's a true believer. We were the first to do all of these things, and more. So I can't really speak intelligently on why to enter other festivals. I can only tell you what we offer.

From the perspective of the filmmaker, what can I expect to get out of having my film screen at Terror Film Festival?

LOTS of exposure to the right people, unheard of and intelligent feedback on your project, a lot of caring for your project, and support in landing a deal and starting your career in the entertainment industry. We don't just screen your film, we go a lot further than that. And we do it for free.

As a horror fan, what can I expect to get out of attending Terror Film Festival?

A great time, networking and meeting industry people, a truck load of filmmaker contacts, and the best benefit of all. GREAT films to watch. We screen the best of the best. Plus, there's so many little surprises we spring on our audiences and fans. Like the whole Bruce Campbell thing this year. He doesn't do cons or fests too much anymore, but he gave us a special intro for our fest and it kicked ass at the Claw Awards! And that's another thing...the Claw Awards. No one else does that. It's truly "The Oscars of Horror". Just ask any of the people who attended this year. Some of the comments were, "You guys are completely honorable", "I was at the American Music Awards and this was BETTER", "This is the most professional event I've ever been to". And we hear it every year, all year long. People just love us because we're real. Another thing too. Alan Howarth came to our festival this year. He called me one day and insisted on coming. He's an Oscar winner, an Oscar nominee, and has scored music (and done sound) on every cool film in the last three decades. He doesn't need us. But he insisted on coming to the festival because as someone who's very cool himself, he saw the cool thing that we do. And another person came out from Bruckheimer's camp without us knowing it. Totally surprised us. That's the power of what we do.

A great film, from every angle. It has to satisfy an intense criteria list. But that doesn't necessarily mean a huge budget or lots of celebrities. Neither of those equate to a great film. It has to be executed right. Even if it's from a famous filmmaker (which we've gotten our share of). The project has to be great or it doesn't get in. We've had many first-timers beat out seasoned pros in getting selected. And vice-versa. And it's all because of a film's true value. Plus, we have a great rating system that's unbeatable. We can actually spot a sleeper hit before anyone else does.

Not at all. It's all in the execution of the project. Some of our selections are first-time films with no budget at all. And some are big Hollywood budgets with star power. But that doesn't matter to us. Only the execution. Art for art's sake.

Just make a great film. That's the only thing that matters. To Terror Film Festival, anyway. Romero even says it.

Right from the beginning. Figuring out which festivals you're wanting to submit to plays in heavy in the type of film you shoot. So does the type of distribution you're looking for. So it's never too early.

Are there any particular success stories from films that screened at TFF?

Oh, yeah. The Murder Game won Best Feature in 2006 and then got picked up by Warner Home Video. Side Sho won in 2007 and got picked up by Lionsgate. Several of our filmmakers got offers to make features. One of our screenwriters got his script optioned in Hollywood. An actress was hired to star in someone's next film. And there's a lot more successes. And we live for that.

Don't let anyone interfere with your vision. Keep it pure and make the best damned movie you can. BELIEVE in your project and believe in yourself.

Tough one. With all the digital outlets now and all the marketers out there who see a new way to make money, who knows. Only time can answer this question. I just hope it stays pure and real and doesn't get convoluted with marketing tricks and shock gimmicks. Horror and Indie Horror are my babies and I don't want to see them bastardized in any way.

What’s next for you and TFF?

The whole world is next. Everyone wants a piece of us now and we love it all. But we want to stay true and to take over the world and fill it with GREAT horror films and legends. So what's next for us? Everything!

Where can people find out more about TFF and how can they go about entering their film?

Just stop by our website, terrorfilmfestival.net, and simply read up on the submission process. Our submissions re-open on January 01 every year.
Posted by Dead Harvey at 9:00 AM