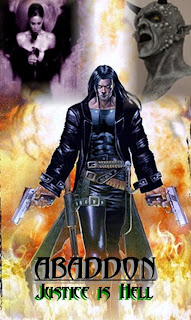 I guess it's the march towards Halloween and there's just tons of horror coming out each week... I started to go through them all, trying to get a 'new horror releases of the week' post done for this morning, but it's just not going to happen. So, once again, that left me with nothing ready to go for this morning. However, I actually do have something cool to post.

Some of the best parts of doing the site is meeting new filmmakers, discussing the whole indie scene and finding out what's going on out there. Further to that, we love helping people out. In fact, I hope to have some news soon, as Dead Harvey will be branching out soon and doing some new things in that regard, but that's not for this post. This post is about up and coming filmmaker, Neil Kellen.

I was chatting with Neil back and forth, as he's in pre-production on his project, "Abaddon". I thought it could be pretty cool to talk to him about that process, as we usually talk to filmmakers after they've completed their project, not when they haven't even shot a frame yet. Anyhow, it's a great read and if you're a filmmaker that's about to head into the same stages that Neil's heading into, this is a must read for you...

Tell us a bit about yourself. What are your influences, where did you get started and what brought you into the world of indie filmmaking?

I'm a 42 year old filmmaker who lives in the last place on Earth you would think a filmmaker should ever live, Henderson, Kentucky. I have spent the majority of my adult life with some kind of motion picture camera in my hands, or on my shoulder, so it was a natural progression for me to move from documentary style shooting to narrative moviemaking.

Although being a kid seeing the original 1977 STAR WARS in theaters didn't hurt my desire to make films either.

I think film school serves as a valuable networking opportunity and can be a benefit for those that have no real idea of the technical side of movie making, but have a strong desire to learn just the same. With that being said, my studies were in television and video production and not “film.”

Tell us about any previous films or projects that you’ve completed.

I am a news photographer by day, so I shoot and edit a minute thirty short story that is seen by around 200,000 people daily. Last Fall, I challenged myself to create a short horror film with a minimal budget and to be shot within a non-consecutive, 24 hour time frame.

FOREVER, a story inspired by “The Monkey's Paw”, was created in 18 total hours with a final running time of just under 10 minutes and a final cost of $28.00 USD

You’re in pre-production right now, tell us a bit the decision to go out and make an indie film. What was the catalyst?

I love movies. I love the process of making movies. From the initial idea to the final edit, I'm addicted. I get a high from the work, As exhausting as it is to some , It's adrenaline to me. I can stay up for days working on a concept.

The project is called “Abaddon”, where did you get the idea from and is this something that you were always intending to go out and make yourself?

I have never understood how someone could come up with an idea only to pass it off to someone else After completing FOREVER, I made notes about mistakes made during that filming and immediately started brainstorming the next idea. I upgraded my video equipment and started tapping out various scenes in CELTX. I brought in a writing partner and knew, at that point, that ABADDON was a GO for me.

I'm a a huge fan of superhero graphic novels and films, and a horror buff. I'm also a very spiritual person. ABADDON is a combination of all these elements.

The classic struggle of Good versus Evil has never been better personified then by the modern imagery of Angels and Demons . I wanted to tap into these legends and build a new story with elements that are already familiar to a 21st Century audience. Leaning much on the Neo-Gothic look that I think is currently the sexiest fashion around, I plan on turning the indie horror genre on its ear by introducing superhero elements to it.

If you're a comic fan, or a fan of action horror, you'll love this movie.

We’ve found that the biggest hurdle for indie filmmakers is financing. What’s your approx. budget and how do you plan on securing it?

The working budget for the version of the script we are tweaking now is just under $162,000.USD

The truth is, there are few individuals that are willing to invest in a risk as high as that of an independent film. Most movies that are made outside of Hollywood don't make a cent. We all know that. Self financing a film yourself could lead to bankruptcy. So what do you do?

I've done a lot of research on this subject and found there are still ways to secure financing for your project. Tapping into overseas markets and approaching genre cable networks to co-produce are some to consider.

I've given ABADDON a year to reach it's budget goals, but regardless if it meets the dollar amount I'm looking to raise, I WILL create this story.

What are you going to shoot on and why?

ABADDON will be shot on HD.

The cost saving is just too large for the independent filmmaker to ignore anymore. So many of us already own our own cameras, editing software, and lighting kits that a large chunk of our budgets can be covered by using our own equipment.

There will always be film elitist in the world decrying the use of any electronic medium as a storytelling tool, but I'm a believer that if the story is good, no matter what medium used, people will want to watch that story you are telling them..

Talk about some of the hurdles that you’ve encountered up until this point.

When you work on a project, time is always an issue. I'm a photojournalist by day and a father of six and a husband by night, so budgeting time and keeping ideas flowing can sometimes be an exhausting experience.

Money is the next most frustrating hurdle. I'm self financing ABADDON throughout the preproduction process. Preproduction is not just polishing screenplays, scouting locations, and sketching out some storyboards. It also means paying for temporary costumes for the promotional photography, buying products so the makeup guy, Joe Stanley, can start developing the demon transformation effects, and working to keep various websites up and running to build a preliminary buzz about the film.

At this point, are you thinking about film festivals, distribution or anything like that? Or are you just simply trying to get the film done?

At this point, getting the film finished is all I'm focused on. I do intend on entering ABADDON into the festval circuit, but it is too early to tell which venues I will pursue. I think every filmmaker dreams of seeing his film on a large screen, but historically, films similar to ABADDION find themselves limited to DVD release. To be honest. I would be pleased with that.

Where can people find out more about yourself and/or the project?

The first of three planned websites is digitalspectrumfilms.com

I will be updating the site often with news on ABADDON and offer up space as forum for other filmmakers projects. I love seeing what the independent horror community offers to it's fans and want to give them yet another venue for their work.

Just because you mentioned it in your email to me, I’m going to bring it up. You’re childhood friends with Gregg Hale, producer of “The Blair Witch Project”, “Altered” and “Seventh Moon”. Tell us about that relationship and if he’s planning on getting involved in this project or is going to help you in one form or another.

Gregg and I grew up with super 8 cameras and big dreams. I think between the two of us, we churned out 50 or so short film scripts from imaginative ideas like “Battle of the Bottles” where two opposing brands of cola fight out a WWII style, marketing battle to our epic “EARTH: Nuclear Holocaust” telling of a group of children from a Moon base who come back to Earth to explore the planet after a nuclear war.

We were only eleven years old then. Those were BIG stories.

Gregg is now in New York and busy with a new job and an even newer baby, but we do stay in contact. He is aware of the ABADDON project, but we haven't discussed the movie beyond the initial idea.

Gregg is a businessman. He has been very supportive of the indie film scene and is willing to invest in projects that he believes might be successful. ABADDON is not at a point in the filmmaking process where I would ask him for a commitment of any kind, but I'm sure he will be open to listening to any pitch I would like to make when the time is right..

Lastly, talk about the indie horror scene. What do you think about where it’s at now and where do you see it going?

Hollywood has proven time and time again it does not know how to make a good horror film and they are, finally, starting to give up. The opportunity for you to make a huge splash in the horror genre market has never been better. The fan base is hungry for something new, different, and really really scary.

If you have an idea, or the talent to think of one, grab a camera and some friends who can act and start shooting. Post it on Myspace or Youtube. Don't let the lack of professional tools slow you down.

I'm waiting to watch too.
Posted by Dead Harvey at 9:00 AM