Indieflix - A New Way To Distribute Your Film 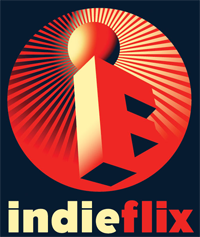 As you know, we're here to help you, the indie-horror filmmaker. As you also know, distribution is the number one concern and question for most of you... so, we talk about distribution a lot. We also preach a few things, such as... 99% of the time a theatrical release is just not an option, sorry. Well, not that it isn't an option, per se, but that a theatrical release shouldn't be your goal. So, take that out and there's still many, many ways to get your film out there, but it really boils down to two methods: on DVD and digitally. They both pose a few issues for filmmakers, but the issues with digital distribution are more about the fact that the industry is in its infancy. Well, now there's someone to help you navigate that world, Indieflix.

I'm very interested in the world of digital distribution, meaning: VOD, streaming online, downloading, etc. I watch it closely and I pass on most of my thoughts to you, though the site. Well, I received a press release from Indieflix not too long ago and it took me a while to finally get around to reading it. I'll admit, a lot of stuff just sits in my inbox... but I digress. After reading the press release, I read a bit about them on their site and what other people have said about them and have come to the conclusion that you should check them out.

There's a few cool things about them: They're non-exclusive, you get 70% of the royalties, they take care of the manufacturing and it's all free to you. I do plan on contacting them and finding out more, though. Whatever I do find, I'll post about later. But until then, here's some excerpts from the press release.

IndieFlix now promotes content with long-standing powerhouse distribution sources - many of them not available to individual filmmakers - like iTunes, Amazon VOD, Hulu, Joost, Netflix, and VUDU. These channels can provide filmmakers with millions of new viewers on a daily basis. The IndieFlix business model is simple: filmmaker provides their film to IndieFlix and IndieFlix promotes the content to the world free of charge. IndieFlix keeps a small percentage of sales and the filmmaker retains all rights to the material.

“Filmmakers are wondering how to get their work out in a more accessible way. There is confusion around how to best release across outlets like iTunes and Hulu. Indie filmmakers need what IndieFlix delivers," says Lance Weiler, Founder of From Here To Awesome, The Workbook Project, and DIY Days.

“I'm an independent filmmaker,” said IndieFlix CEO Scilla Andreen. “Distribution through the old Hollywood system is a maze of closed doors. We need a way to get our hard work out to the people who will love it, and with IndieFlix's new distribution deal, we've finally got it figured out. The future of independent film is not only in content aggregation, but also in audience aggregation and innovative marketing”

Company: IndieFlix is an independent film distribution and discovery site founded on the principles of community, promotion, syndication and transparency. We connect filmmakers, festivals and audience.

Our mission: For IndieFlix to be the first point of entry for the audience to find independent film and to set a standard by which company policy elevates and empowers the interest of the filmmaker.

Connecting supply with demand: IndieFlix.com, a trusted, multi-platform distributor of independent film founded by 2 award-winning filmmakers with the emphasis on marketing and filmmaker relations. Our growing library now stands at 1000+ film festival titles with worldwide rights.
Posted by Dead Harvey at 9:00 AM