New Horror out on DVD this week, starting with Repo! The Genetic Opera. 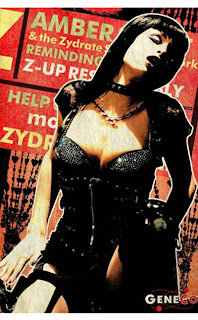 The horror train keeps on rumbling down the tracks, as it is, yet again, another great week in horror. In fact, there's a couple of 'must sees' in here, including the first film, "Repo! The Genetic Opera". It's been talked about so much, it's WAY out there and let's give Darren Lynn Bousman a break and make this the cult classic that it deserves to be. There's more to this week than that, but you're going to have to read the rest of the post to hear more. Also, if you want to buy any of these, click on the title and buy them off Amazon, through us, and don't forget to head on over to our Youtube page and see all the trailers.

So, the wait is finally over, "Repo! The Genetic Opera

" comes out on DVD and Blu Ray this week... Although the film has been completed for quite some time, this is really the first chance for the masses to check it out. It had an very limited theatrical run, starting on November 7th... and ending somewhere between the 8th and 9th. It opened on 7 screens total, split between the cities of Chicago, IL; Mobile, AL; Charlotte, NC; Kansas City, MO; Toronto and Ottawa, Ontario, Canada and it brought in $3,250 per screen on its opening night. To support the release, Darren Lynn Bousman and the writers did a touring version of the film, where they would be on hand, talk before the film and then do an extensive Q&A session following the screening. Those were actually quite successful, were well received and they're going to do a few more of them. So, if they're coming to your town, it'll definitely be worth checking out. For more information on it, you can go to RepoRoadTour.com. Long and short, if you're a horror fan and don't know about Repo at this point, I'm shocked... it's a rock opera-musical from Darren Lynn Bousman about a guy who repossess organs when people can't pay for them. Bousman's one of the guys behind "Saw" and the film has a few notable actors in it, including: Bill Mosely, Paris Hilton and Paul Sorvino.

" also comes out this week and it, pretty much, just takes off from where the last one ended. I guess they write them now, knowing that they're doing another one next year and next year is no different, as they're already in production on "Saw VI". This one was directed by David Hackl, who was the production designer of Saws II, III and IV, and the second unit director on Saw III and IV.

" is the third installment into the "Boogeyman" series, which started in 2005 with... "Boogeman". The original film was rated PG-13 and was produced by Sam Raimi's Ghosthouse Pictures, directed by Stephen T. Kay. "Boogeyman 2" went direct to DVD about a year ago and was directed by Jeff Betancourt. Now, "Boogeyman 3", directed by Gary Jones, comes out this week, straight to DVD.

" was actually supposed to get a theatrical release and was slated to hit the theaters in January of 2008, but it got pushed back to April 25th, then to September 12th... then, once again, to December 26th. However, at that point, Warner Bros decided to fuck it all together and just release it direct to dvd this week. It continues the new rash of clown related horror films and was rated R for horror violence, terror and disturbing images. It's an anthology of seemingly unrelated stories tied together by a common thread from the past of three former schoolmates. It was directed by John Simpson and was written by Jake Wade Wall, who was the guy who wrote "When A Stranger Calls" and "The Hitcher". Getting pushed around that much, then eventually released straight to DVD never means anything good, but I'll give it a go and report back.

...and the sequel's continue. Well, in this case it's actually a prequel. "Vacancy 2: The First Cut

" is the prequel to 2007's "Vacancy", which I really liked. If you didn't see it, it had Luke Wilson and Kate Beckinsale stopping at a seedy hotel where the low budget slasher film on TV wasn't fake, but was, in fact, filmed in the very room they're staying. "Vacancy 2: The First Cut" takes place years before the first film and, essentially, sets it all up. The motel owner already has a bunch of camera's set up to tape his guests sexual activities, which he sells... but sales are down. When a serial killer checks in and brutally rapes and kills a hooker, they subdue him, but quickly realize that turning him in would compromise their whole porn operation. So, what do they do? They decide to get into the snuff business. Makes sense to me...

" is actually a Norweigian horror film, directed by Roar Uthaug. It came out in October of 2006 to great reviews and is being hailed as one of the best modern Norweigian horror movies ever made. The film, itself, was shot at the top of Jotunheimen and helicopters had to fly 20 tons of equipment to the top of the mountain, where temperatures were 25 below. The film took 2 years to shoot and another 9 months for special effects and post. However, it was all worth it, as the film grossed over $14Million in 2007, before it made it to North America. It was shown at Slamdance last year, along with the San Fran International Film Festival, the Seattle International Film Festival and various others, all to critical acclaim. It's won various awards and a lot of people are calling it the slasher flick of the year. So... if you're going to see one Norweigian horror film this year...

" is the infamous uncensored video from metal band Lair of the Minotaur. It includes the TV version, which was seen on MTV2 on Headbangers Ball, but it also contains behind the scenes footage and over 45 minutes of live footage that spans the bands career. If you're into metal, go check out the trailer on our Youtube page... it's filled with medieval gore, guts, nudity and general slaughter. If I was just at some party or something, I'd never even think to bring "War Metal Battle Master" up. However, knowing our readers, there's probably more than a few of you who are interested.
Posted by Dead Harvey at 9:00 AM