New Horror out on DVD this week: We're back... and so are the horror films. 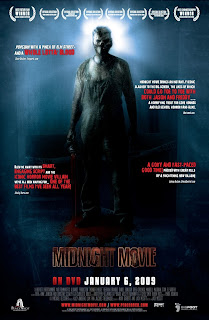 Well, we're finally back in full swing and it looks like the distributors are, too. There's a full slate of decent horror films out this week, from micro to big-budget, and you're going to want to look into a few of them for sure. As usual, if you want to buy one of them, just click on the title and buy it off Amazon, through us. Also, you can head on over to our Youtube page and check out all the trailers.

", written by Mark Garbett and Jack Messitt, directed by Messitt, won a couple of awards at the Chicago Horror Film Festival and it very well could be the horror release of the week. Messitt has had a big career in cinematography and camera operating before "Midnight Movie", which is his directorial debut. And, really, from what I hear, it's a helluva directorial debut, folks. Although the plot sounds very B-Movie camp, rumor around the campfire says it kicks a lot of ass and I, for one, will be checking it out soon. The film is about a midnight showing of an early 1970's horror movie that turns to chaos when the killer from the movie comes out of the film to attack those in the theater.

Although the reviews are mixed... and leaning towards negative, I'm not sure why "The Alphabet Killer

" didn't get a bigger release. It's from Rob Schmidt, who directed "Wrong Turn", the Masters of Horror episode "Right to Die", as well as a few other things AND it also has a decent cast, with Eliza Dushku, Cary Elwes, Michael Ironside, Bill Mosely and Timothy Hutton. Timothy Hutton, people. TIMOTHY HUTTON. And Choptop himself, Bill Mosely, of course. It did screen at a couple film festivals, then had a very limited theatrical release, being released in only two theaters. It's loosely based on the Alphabet murders that took place in Rochester, New York between 1971 and 1973.

", written and directed by James Watkins, is being released by Dimension Extreme and it's won awards at both the British Independent Film Awards and Sitges - Catalonian International Film Festival. Straight outta Britain, it's about a young couple that confronts a gang of loutish youths with terrifying brutal consequences... and those "terryfing brutal consequences" are apparently real brutal and gory. Very rarely do you see kids getting the shit kicked out of them on-screen, so I'm looking forward to this one. Not that I advocate kicking the shit out of kids, I just like seeing it... when the kids deserve it. Remember, beating is training.

"The Legend of Sorrow Creek

" comes from Michael Penning, whose only other credit is for being the script editor on "Bikini Girls on Ice". He's the Director, Writer, Producer, Composer and sound department for "The Legend of Sorrow Creek", which leads me to believe this is a low budget indie horror. It's about a pair of sisters, along with one of their boyfriends and his best friend, who have a simple fishing accident, then follow an unexpected shortcut through the woods... and they encounter the shocking and terrible curse of one of America's most haunted places.

" comes from Nick Oddo and it's a fairly short, micro-budget feature film, coming in at only 58 minutes. I'm not sure, but is that technically a feature? Either way, it comes from Midnight Releasing, it won an award at the New York International Independent Film Festival and it looks pretty f'ing cool. It's about a drug dealing mobster that owns a neighborhood whorehouse, who wants to take care of his father... a convicted murderer. However, the sins of the father and violence of the son overwhelm good intentions and lead to a blood soaked finale.

" is the directorial debut from Ryan Graham and, although it says it came out this year, it was actually finished a few years back. That's just the way it is with low-budget horror... and this is a great low budget horror, with just a titch of comedy thrown in. Well, a lot of comedy. It's about an 80's rock star, a corporate lackey and an evil mother-in-law who all die bizarre deaths. But when the dead start coming back to life, these three zombies find that picking up where they left off isn't as easy as they'd hoped. Check out the trailer, looks pretty f'ing funny and gory.

" comes from Brendan Deininger and it's what we like to call a micro-budget horror, meaning it was probably made for around the same amount of money that Hollywood films would pay for one days lunch. And these are the types of films that we love, so we'll definitely be looking closer at this one. It's about a couple of homicidal lawn care workers that realize a better living through killing, just as the title would suggest, and guiding them is a talking, foul-mouthed owl named Bonaparte.

"Kiss of the Vampire

", which was originally called "Immortally Yours", was written by Katherine Hawkes and it's her first produced screenplay... as she's more of an actress. It was directed by Joe Tornatore and it's his 6th feature... although he's more of an actor. It's about a coven of sexy, modern day vampires who ravage the American Midwest... when a romantic twist puts the vampires at odds amongst themselves.
Posted by Dead Harvey at 9:00 AM