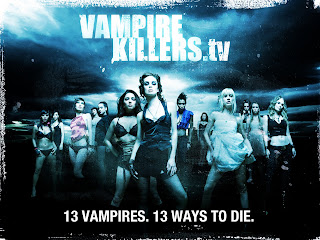 One of the best perks, for me, of doing this site is people bringing their projects to our attention. First off, we're more than happy to promote any new project you're working on. If you've got something that you'd like to promote, get in touch with us, we're more than happy to write about it and, hey, more than happy to give our thoughts, if you care. Secondly, I heart checking out new projects... especially when they're doing something new and cool with it. That's precisely the case with "Vampire Killers", from Doug Hutchison, which is being distributed online and through Youtube. Also, it has hot chicks, vampires and hot chick vampires in it, of which I'm a fan of all three. I'll break out what they're doing here for you, but I'm hoping to talk with the guys behind it and give you a bit more later...

ABOUT VAMPIRE KILLERS: Armed with a skeleton crew of guerrilla film soldiers, Hutchison has created an engaging, gritty web series based on his intense vampire mythology. VAMPIRE KILLERS involves a ruthless cabal of alluring female vampires and the relentless stalkers who want to take their empire down. The midnight streets of Los Angeles are the location for this epic struggle between the righteous and the undead. VAMPIRE KILLERS features a stunning cast of 13 sexy blood-obsessed night dwellers fighting to stay "alive" at all costs. The streets of Los Angeles just got a lot less safe. Check out Hutchison's vampire epic and study up on the vampire lore that surrounds their world -- it may be your only hope for survival! You have been warned. WWW.VAMPIREKILLERS.TV is online...


Now, having said all that, don't go over to their Youtube page to watch the next episode, because they banned episode 2. Here's the press release that followed...

With this year's insatiable appetite for vampires [ie. HBO's TRUE BLOOD and the upcoming TWILIGHT], Hutchison's gritty sexy dark series features a coven of 13 alluring blood-sucking vixens and the four vampire killers dedicated to hunting
them down ... by any means necessary.

The question was: How to reach out to Worldwide fans?

So Hutchison posted episode #1 of VAMPIRE KILLERS and -after a glowing reception -- followed with episode #2 ... which YouTube swiftly yanked claiming it had violated their strict "Terms and Conditions" by featuring "Graphic Material" [a scene in which a kidnapped young woman is ravaged by a vampire in a motel bathroom]apparently "unsuitable" for YouTube's global audience.

Would-be viewers are now re-directed to Hutchison's site[WWW.VAMPIREKILLERS.TV] where they can watch the series uncensored.

Fans of VAMPIRE KILLERS are filling forums with their outrage over what they're deeming: "A digital gestapo".

Hutchison is disappointed episode #2 cannot be shared with the YouTube community, but is hoping the scandal may work in his favor. "My VAMPIRE KILLERS website has experienced a significant spike in foot traffic since the ban, so I'm encouraged", Hutchison said, "but still ... without YouTube, our base is greatly compromised".

So far, subsequent episodes of VAMPIRE KILLERS have not met with YouTube's clamp down.

I watched everything that they have available and I have to say, it's a wicked idea and definitely worth checking out. So, here's some links for you.

To check out the show, go to their home page: VampireKillers.tv.
For their Youtube page, go to: YouTube.com/VampireKillersTV
Posted by Dead Harvey at 9:15 AM

It cannot succeed in actual fact, that is exactly what I think.