New Horror out on DVD this week... get ready to bowl till you bleed! 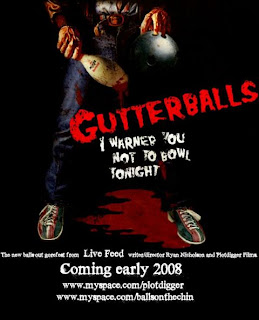 Well, it's the start of another work week and, as much as that sucks ass, there's some good shit to look forward to when it comes to horror this week. I'm definitely most stoked for "Gutterballs", from Ryan Nicholson, but there's a lot of other shit that needs to be checked out. So, as usual, if you'd like to buy any of these, just click on the title and you can get them off Amazon. Also, you can head over to our Youtube page and check out all the trailers.

My pick of the week is "Gutterballs

", which is from Vancouver-based, Plotdigger Films, a production company specializing in indie horror. You may remember their first film, which debuted in 2005, called "Live Feed". I really dug it, especially because the exteriors of the theater were shot across the street from me. It was also an ultra-gory torture porn fest and the last entry into that genre that I really enjoyed... "Gutterballs" is their follow up. Heading over to their site, it looks like they're busy, too. They've got a couple more films in the works in "Star Vehicle" and "Hanger". What really kicks ass about these guys is that they're blatant horror fans, throwing out homages everywhere... look at the main poster for "Gutterballs" over there, it's a straight-up rip-off of the slasher classic, "Maniac", and the phone number to the bowling alley in the film is 976-3845 (976-EVIL). It's written and directed by Ryan Nicholson, who's also the creative director / marketing operations over at Plotdigger, and it's about a brutally sadistic "Accused"-style rape that leads to a series of bizarre and gory murders during a midnight disco bowl-a-rama at a popular bowling alley.

I'm not sure if "Sharks in Venice

" was a Sci-Fi orginal, but it sure fits the mold. It was directed by Danny Lerner, who's more of a low-budget action/sci-fi/horror producer-type guy. He was behind films like "Alien Hunter", "Octopus 2: River of Fear" and "Operation Delta Force". He's also got a soft spot for shark films, having directed this, "Raging Sharks" and "Shark Zone". Did I mention that this stars Stephen Baldwin? Anyhow, what I find interesting about this is that it's yet another low-budget film that was shot in Bulgaria. They've been filming so much low-budget shit there now that they're now calling it 'Bullywood'. They must be giving huge tax breaks and incentives because there's more coming... including the upcoming "Rambo V".

For all of you that anxiously wait for Thai superhero movies, wait no longer! "Mercury Man

", from Bhandit Thongdee (originally called "Ma noot Ihek lai" in it's native Thailand) is finally available. I don't know much about it, but it looks like it's a violent, effects driven film... and couple that with the fact that it's about a Thai Superhero, I'm in...

" is from Ron Bonk and it won three Bonehead Awards from the Bare Bones International Film Festival. Bonk's produced a LOT of indie horror, including "Razorteeth", "Bloodsucking Redneck Vampires" and "Last House on Hell Street". His last directorial effort was "Strawberry Estates", which is much talked about in the horror world, as it, well... wasn't given stellar reviews by everyone. In fact, there were a few people who called it one of the worst horrors ever. Personally, I would never say anything so negative, but I will say that "Clay" looks alright. It's about Clay, who's a killer. He's a killer because his Dad raised him on evil stories, lies, bitterness, abuse and fear. Now, he walks the streets, picking victims by fate, and his past and present will converge into one violent and brutal climax.

" is one of those things that really just for horror fanatics... or film historians or something. It's a four disc set from award winning author Stanley Wiater and it features interviews with the world's greatest horror/fantasy writers, artists, actors and filmmakers in close-up, insightful conversations. All the interviews were put together for a TV series called "Dark Dreamers", but I've never seen it or heard of it, so... if you missed the whole series, like I did, and you're into horror history, this could be a cool set to check out.

" is a documentary from Laurent Courau about the 15,000 REAL Vampyres that are living in the U.S. No shit. It's a real documentary, go over to our Youtube page and check out the trailer. It's about a journalist who discovers the underworld of the clans of Vampyres in New York, who then spends two years with them and brings back unique evidence on film. Cool idea... piqued my interest, anyhow.

", which was originally called "Mortuary", is written and directed by Shawn Hazelaar and it's about three college students and a local drop out who break into a mortuary that happens to be home to a serial killer. Didn't Tobe Hooper have a film come out in 2005 called "Mortuary"? I guess that's why they changed the title... Anyhow, Hazelaar served as writer, director, cinematographer, producer and editor on the film.

" are two low-budget indie horror shorts, grouped together and being sold through Passion River. The tagline is "indie movie masters Festival of Horrors Filmed in Blood Vision". "The Sirens" is from Stephen Zimmer, who was the guy behind "Shadows Light" (and we talked with him about that not too long ago...) and "Murderer" is about a serial killer, confined to a cell for the rest of his life, who tries to kill himself. It's from Vincent Bingham, I think...

Also out this week is "42nd Street Forever Vol. 4

", which is a pile of trailers for old and new indie horror films. Pretty cool, actually. Also, there's the 20th Anniversary Edition of "Redneck Zombies

", the indie horror classic.
Posted by Dead Harvey at 9:15 AM