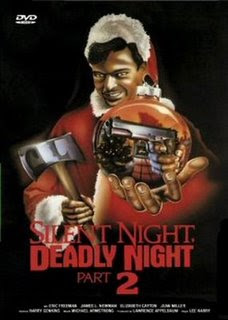 Brad - My friend Brian Henley and I usually talk about drinking whiskey. We also talk about drinking beer. One day I branched out and told him about writing for Dead Harvey. This is where I learned he was the child killer in the flashback scenes of "Silent Night Deadly Night Part 2". As soon as I discovered this, I went ape-s and asked him to write an article for Dead Harvey, which he graciously agreed to. I guess I owe my friend some whiskey now.

Before I give you Brian's column, i'd like to share an email he sent to me after he finished the piece. Truly bizarre and chilling...

So here is the article I asked to write for your excellent website. However, the weirdest thing happened as I was writing it.

There I was, finally with enough time to write given the Christmas holiday, and I sat down at the computer and put on the TV for background noise. I hadn't even started the first sentence when the news came on, and damned if the first story wasn't about a guy who put on a Santa suit and went on a killing spree on Christmas Eve. I was poised, ready to write about my tiny part in an obscure movie featuring a Santa suit psycho rampaging on Christmas Eve, when on the news I see that it has just actually happened. Of all the tragic, weird, horrible and coincidental surreality... it's enough to drive a man to drink.

It was close to us, too. The killer lived in Montrose, the ex-wife (whose party he ruined) was in Covina. Truth is always stranger than fiction."

Sorry, didn't mean to freak anyone out. That was just too weird not to include. Real life definitely is way more f'ed up than fiction.

Okay everyone, without further ado, I give you Brian's column about his experience working on the horror classic, "Silent Night Deadly Night Part 2"... 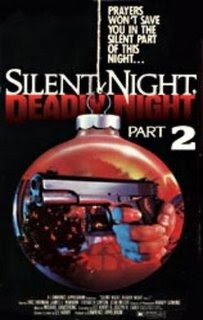 My name is Brian Henley, and if you are truly Rainman-style obsessive-compulsive about your micro-budget horror, you might remember me from my pivotal role in the watershed 1987 masterpiece entitled “Silent Night Deadly Night Part 2”. That’s right, I’m that Brian Henley.

Seriously though, two decades ago that was a fun experience. I was nine years old and I got three days off school, and there were build-your-own sandwiches on a card table in the parking lot where we were filming. It was very exciting, and I have pleasant memories about it to this day.

I was in three scenes, with a line in each, so obviously a starring role. My first scene was about twenty minutes into the movie. In the first film, my character’s older brother indulged in an axe-wielding binge on Christmas Eve, only to be brought down by a hail of police bullets. His last act is throwing the axe at my prequel counterpart’s feet. Naturally therefore, my first onscreen moment is a slow pan up from the axe, to my sneakers, then past my plaid shirt to my horrified face. Sort of a passing of the torch, the torch being a bloodstained lumberjack’s axe. Of course, being nine and not a talented actor, my face is far from convincingly horrified. In my defense, there was no bloody axe at my feet, nor was I told at the time exactly why I should have looked horrified. “Look really scared and pissed off,” I was told, and film rolled. The rest of the magic coalesced in the editing room.

My second appearance, and really my shining moments in the movie, come in a faux-home-video sequence showing me interacting with my adoptive family, happily and well-adjusted. My stellar method acting during these interludes is easily explained: I didn’t know I was being filmed. They just took me to somebody’s backyard with the rest of the cast present and in costume, had a barbeque, and secretly filmed the entire thing. I have not tracked the career of “Silent Night Deadly Night Part 2”’s director Lee Harry, but if anything he is great at directing children.

My third and final scene is unremarkable, except for how my performance was elicited. In the scene I am walking down the street with my adoptive mother when I see a pair of nuns. My character, having been raised by wicked nuns in a brutal Catholic orphanage, panics. I was having trouble panicking on an empty street, so the director asked me what I was scared of. I told him I was scared of snakes. He thought about that for a while, realized that he had no ready access to snakes, and so arranged for a muscular Black guy who had been rigging lights to walk towards me menacingly off-camera. Unfortunately, I wasn’t really scared of muscular Black guys, so he had to accept my rather lackluster performance.

So that’s my tale of a pre-teen experience in the weird world of indie horror. I have never, unsurprisingly, re-entered the movie-making scene. I still remember, however, that the movie was fun to make, and all the important adults running around actually making the movie seemed palpably inspired. In contrast, very few of the large-budget feature films I go to nowadays seem fun, or inspired. Thank you for reading this trip down memory lane, and I’m glad there’s still a horror movie underground that’s inspired and having fun.

Thank's for sharing your story with us Brian. If anyone else would like to share their experience either making or working on a horror film with us, please send it our way! Believe me, we need the material! Besides, Ted's been working too hard lately and it's been cutting into his drinking time.