Interview with Christine Parker, writer/director of "Fistful of Brains" 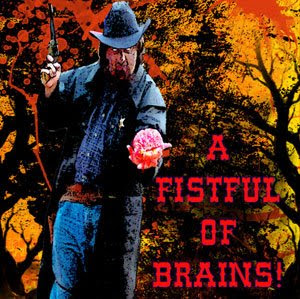 You may remember a film that we discussed a while ago, from Christine Parker, called "Forever Dead". If you missed it, can't remember it or just want to read it again, here's a link to our interview with her about it... She's gone out and made another zombie film called "Fistful of Brains" and, quite frankly, I love the fact that she followed up her first effort so quickly. Next, I love the fact that this film is a huge step up from her first film as far as look, feel and story and, not only that, she made it for around the same budget. Further, she managed to round up a few notable names to get involved. So, you know what that means? That means she's evolving as a filmmaker, which is awesome and great to see... and what's even better about that is, she's willing to share what she learned with you. So, here we talk with Christine Parker about her latest film, "A Fistful of Brains". Enjoy, it's a great read...

"Fistful of Brains" is your follow up film to "Forever Dead", at what point did you decide to go out and make a second film?

We were actually about half way done with Forever Dead when we came up with the idea of doing a zombie western. My friend Darrell Parker had just done a movie at a guys old west town that he'd built on his horse ranch and thought it would be a great location for a horror movie.

The films are very different, yet they both have to do with zombies. First off, do you just like zombies or is it a coincidence? Secondly, where did you get the idea for "Fistful of Brains"?

Firstly, yes I do enjoy making zombie movies. I would like to do something other than zombie movies but right now our fans are demanding more zombie movies so we'll keep making them.

Secondly, geez that's a tough one. I knew I wanted to do a zombie western and we had come up with the title Fistful of Brains and we just sort of went from there. I started writing and the story just evolved. I did a couple of rewrites and we had it.

Did you increase your budget on this one at all?

Believe it or not we didn't really spend much more than the last one. The difference is this time we didn't have to buy all the equipment so we could put the money into the production itself which was nice.

What did you shoot on and how long was this shoot?

I used the same camera as last time my trusty old Canon GL2. It took us nearly a year and a half of shooting on weekends to get er done.

As far as the filmmaking process is concerned, what did you learn from the first film that you could apply here?

A WHOLE lot! I got from behind the camera more this time and actually let Bill Mulligan do a lot of the shooting. So I really got to direct more. We also planned things out more. Even did some story boarding and shot lists when I could get Bill to use them. We had a better sound hook up this time.

We knew a lot more about lighting so that worked better. We felt we went a bit overboard with the last one on the gore so we cut back on the gore a bit on this one and tried to spend more time on character development. And most importantly I let a professional, Greg Putnam, do the sound design and composing. This was real load off of me since I really struggled with that on the last one.

Talk about the set. It was UNREAL, absolutely perfect. What came first? The idea. or the set?

The set came first but we actually ended up using a different town than the one that originally inspired Fistful of Brains. The one we originally wanted was too expensive. We looked at a few alternatives. Oddly enough there are more than a few people who like to build faux western towns on their property here in North Carolina. My friend Ed knew someone who had gotten married at an old west town that some guy had built on his property out in Smithfield so we checked it out. It was perfect. Deputy Dan (William Drake) is the guy that owns it and is a veteran actor from the old westerns I grew up watching. It was a perfect fit.

You had some notable cameos in "Fistful of Brains", including Heidi Martinuzzi, Pericles Lewnes and Chuck Williams. How'd you get them involved in the film?

Heidi I'd gotten in touch with from Forever Dead. She helped me promote it on her website pretty-scary.net. She heard about me when I started selling credits to raise money on e-bay and we became e-mail friends. I offered her the part of Daisy in Fistful. She came down for the weekend and shot with us and we had a blast! She was such a professional. She really made us step up our game.

Peri I met through that ill fated Fox reality show On the Lot. We found that we both had a love of zombie movies. I was already a fan of his since I'd watched Redneck Zombies for inspiration when were getting ready to shoot Second Death. We talked on the phone a few times and he gave me some great advice on distribution when I was shopping around Forever Dead. I wrote the part of Frank for him so he really couldn't turn it down.

Fortunately he lives in Maryland so he was able to drive down for the weekend. It was like 100 degrees that weekend and no AC in the town. We were all sweating like dogs! He was great though and really gave one of the best performances in the movie.

Chuck was a friend of my friend Ed. Ed runs a haunt called the Frightmare here in Raleigh and he met Chuck at a haunt convention. This was when we had first done Second Death. He loved the movie and gave us a quote for the cover and even called me to discuss it. He didn't care for Forever Dead quite so much but I still convinced him to come play a part in Fistful of Brains. We cut a deal and he came out for the weekend and fun was had by all. You can hear interviews we did with all these guys on our podcast at fistfulofbrains.podbean.com

As far as distribution is concerned, what did you learn from the first film that you applied here?

I learned that sex sells so we did our best to sex this one up a bit. If it weren't for the over the top gore on Forever Dead I don't think it would have gotten distribution. I'm hoping they will find this one more marketable. At least it does have a fairly unique idea which is good too.

Where can people find out more information on "Fistful of Brains" and/or buy a copy?

We're working on the DVD extras right now and hope to have copies available to the public by late January or early February. Check our myspace page or contact me there for updates. That link is myspace.com/fistfulofbrains Our official website is fistfulofbrains.com and our podcast site that chronicled the making of our movie is fistfulofbrains.podbean.com

Next is the sequel A Few Brains More: Summer of Blood. We plan to ramp things up a few more notches and hope to do some really cool stuff with this one. It's set in 1973 and continues the story of Lily and Jack as they continue to pursue Dead Eye and stop him from creating more zombies. The myspace page for that is up and running: myspace.com/afewbrainsmore

We're also doing a short film for our Executive Producer Lanny Maude who put up most of the money for Fistful. He's a great screenwriter and wrote a wonderful horror short called Dead of the Night. We'll be shooting that in February and March. I'm also collaborating with a Belgian writer Mike Cannon on adapting one of his short stories about a werewolf. So that should be fun! Then Bill Drake has written his own cowboy movie that he wants us to shoot for him in March and April so we'll be back out at Shadowhawk for that. We're pretty busy!
Posted by Dead Harvey at 10:00 AM