September 9, 2008 - New Horror Out This Week: This week's for YOU, fans of Uwe Boll and Tiffany Shepis! 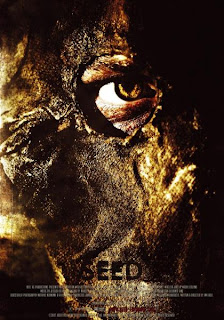 I'll give this week a C+, potentially a B- in releases. If you're an Uwe Boll fan or a Tiffany Shepis fan, you'll think it's an A day, for sure. Remember, you can click on the titles to buy them from Amazon and/or go to our Youtube page and check out all the trailers...

Uwe Boll fans rejoice! It's the second Boll film in as many weeks. Last week, we had "Postal" and now "Seed

" tears video stores a new a-hole. So, "Seed" is based upon the fact that, according to US Federal law, if a death row inmate gets the electric chair and survives three jolts of 15,000 volts each for 45 seconds, he/she gets to go free. Well, that's actually bullshit, but it didn't stop them from making the film. When Max Seed survives three volts, is buried alive, then claws his way to the surface, he's hell-bent on vengeance. The film was shot a few years ago for around $10Million and I don't think it had much of a theatrical release. As it's Uwe Boll, there's a lot I could talk about here, but I'll just say this - you have to give credit to Boll for one thing. He's done what only the elite of the elite in Hollywood have been able to do... he completely transcends his films. Like Spielberg or Scorcesse, you don't care about the title as much as the fact that it's an Uwe Boll film. Good or bad, he's made his mark... and a career.

It's almost fitting that when an Uwe Boll film comes out, there's also an Ulli Lommel film. Even though Ulli's a lot older, he's sort of the poor man's Uwe. This week's Lommel film is "Son of Sam

"... and, WTF Ulli? Seriously. Ulli Lommel is the guy behind all the serial killer films and they're all just so-so. You know, there was "Zodiac Killer", followed by "B.T.K. Killer", then "Green River Killer", followed by "Killer Pickton", right before "Cannibal", which was... yeah, you get the picture. In fact, he did 17 serial killer films in 4 years. No shit. Lommel is right up there with Boll, but isn't quite the character that Uwe is. Lommel's claim to fame is directing one of the biggest indie horror hits of all time, which was "The Boogeyman" in 1980. He made it for $300K and it went on to gross $25Million and I guess that was enough for him to keep on making movies...

". However, I think they added the "Strippers vs Zombies" bit later. Either way, I like zombies... and I like strippers. I don't see why we can't turn this into Sci-Fi series, it makes way more sense than Werewolf Strippers or Zombies vs Nuns or something. Maybe in the next incarnation, zombies can infect an all-girls Catholic school, and the surviving group of hot school girls can be rescued by a pack of vampires or something? Okay, if I see that film, give me credit at least. "Zombies! Zombies! Zombies!" stars everyone's favorite scream queen, Tiffany Shepis, and a whole bunch of other hot chicks. It's the directorial debut from Jason Murphy and it was written by Anthony Steven Giordano. The plot revolves around... really, do you care? Zombies and Strippers, 'nough said.

Tiffany Shepis has another film out this week, this one's called "Nympha

" and it's directed by Ivan Zuccon. Zuccon's made a few other films, mostly in his native Italy, including "Bad Brains" and "The Shunned House". (I think it's Italy, I'm not sure... my apologies if I'm wrong) "Nympha" is about a young English girl named Sarah, who goes to Italy to take vows needed to become a cloister nun of the 'New Order' Convent... however, the rules of this convent are torture. So, violence, disturbing content, nudity and lesbianism ensue.

", directed by Josh Muscatine, is about nine friends who take a vacation to end the mourning period of one of their beloved, but a tenth member has joined the festivities and he has less joyous ideas in mind. This is Muscatine's directorial debut, although it looks like he's been involved in the editorial department for almost two decades. The trailer looks pretty f'ing good, it looks very indie and I can't find much more out about it, so I may have to delve a little deeper into this one and find out what it's all about.

" was originally called "Zombie Night II", as it was the follow up to 2003's "Zombie Night". Also, it looks like it originally came out in 2006, but that doesn't mean much. A lot of indie films toil around for a while, trying to find a distributor. The film is from David J. Francis, who's also made two other zombie films, the afore mentioned "Zombie Night" and this year's "Reel Zombies". It's a fairly low-budget indie horror and it looks like the film's got everything you need, from nudity, zombies and midgets, to... well, what else do you need? Check out the trailer, it looks great.

" is actually a few years old, so I'm not sure why it's being rereleased already. It's from director Vince D'Amato and it was originally called "Carmilla", before The Asylum decided to cash in on the "Freddy vs. Jason" crowd, which just came out when they originally released this. Also, the film was cut by over three minutes in North America due to comic bloodshed and one shot of oral necrophilia... potentially, this release restores all that, I'm not sure. Do note, if you do check this out, the biggest disappointment will be that at no point in the film do vampires actually combat zombies. So, the title, you know... kinda lies... but if I can see some oral necrophilia, it might make up for it.

" stars Kevin Sorbo and was directed by David Winning. It's a Sci-Fi Original movie, so know what you're getting into there. Actually, David Winning has made some of the best Sci-Fi Original films that came out, so... take that for what it's worth. However, I do dig this one because it's sort of an homage to "The Blob", as it's about a slime that amasses on the lake front and seeps into rooms, but Hercules discovers that the slime is actually a massive cellular organism living in the sewer system that's highly intelligent and capable of inducing fearful hallucinations in its victims.
Posted by Dead Harvey at 9:00 AM