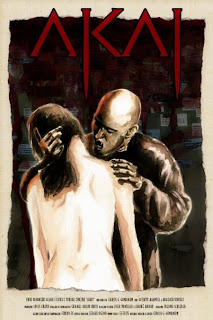 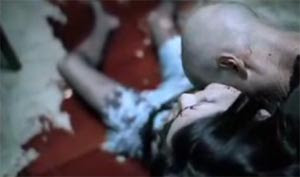 We here at Dead Harvey were very excited to receive a horror film from Brazil in the mail. And we were not disappointed, to say the least. Carlos' film, "Akai", is a stunningly visual piece of work. It's a essentially a silent film shot with a seventies feel and it's really damn impressive. Dead Harvey highly recommends, "Akai" and thank's Carlos for the interview!

For more info. on, "Akai" check out Geral Filmes at
geralfilmes.com.br or check out this link for the trailer on you tube.

DH: Tell us about your background. Where are you from and what got you into making movies?

I was born in Sao Paulo, Brazil, and lived down here all my life. Started to be interested in movies at an early age, around 9, 10 years old. Always enjoyed horror films and other genre stuff (westerns, action, comedy, etc), caught a lot of foreign B-movies that aired on local television, staying up late at night to tape them. Also as a teenager, I collected posters, lobby cards, movie memorabilia in general, so when I got older it seemed to be pretty obvious that I should pursue film making, since I had a passion for it.

Yes. I did attend film school, and while I think it's important, providing valuable information and networking opportunities, I also believe that nothing beats being on a movie set. You truly learn the craft by actually making films, simple as that.

Get your hands dirty, try to be informed about every aspect of the process, and be as productive as possible.

DH: What elements, do you believe, combine together to make a great film and why?

That rare combination of interesting material, done by a director with a strong vision, who casts well and let the actors do their job.

DH: Who are your primary influences as a director and why?

DH: Akai is brilliantly shot. Tell us about your choice for the look of the film.

My DP on the film, Gabriel Kalim Mucci, had a lot ideas and gave a ton of input. We settled on a style that was heavy on inky shadows, crushing the blacks, blowing highlights, separating areas with different colors, mixing temperatures. It's a very difficult look to achieve, and needed some adjustments with the art department to make it all work, but I'm fairly happy with what we pulled off.

This particular story lent itself to such an exaggerated look, so we went for it.

DH: Akai is essentially a modern day silent film. What are your thoughts on this?

I wanted to tell a story through images and sound, not relying on dialogue or any kind of exposition. It's more complicated to convey information that way, but we were up to the challenge. Since it's a short, we took chances, making unusual choices and attempting a different approach to familiar elements. In some instances it worked, and I'm pretty happy, in others it didn't, but that's ok. At the end of the day, we had freedom to be fairly experimental, so we tried to step out of our comfort zone whenever we could.

I'd say specific. Composition, colors, shooting format, method of coverage, acting style, I try to figure all that stuff out as I'm writing, very early on.

DH: What, in your opinion, is the biggest thing aspiring filmmakers need to know before going out there and shooting their first movie?

That's a tough one. It all begins with a good script. If your script isn't in shape, you're going to be in trouble later on, no matter how well you prepare. Changes and tweaks will be made, but I think that a solid game plan, that originates during pre-production is essential. If you have a starting point, you can deviate from it with confidence and not waste everyone's time on
the shoot.

Another key ingredient is hiring the right people for the job. Know you crew and their technical limitations, so that you are aware of how much you can push them. Get the best actors, audition them, see if they have chemistry. Rehearse as much as possible.

And above anything else conform your script to your budget, be creative with solutions, not wasting cash whenever there's trouble. Work with what you have.

DH: What is the one thing you'd most like people to take with them after they watch, "Akai"?

I hope people don't just watch it passively, and actually make an effort to figure out certain things that are left up in the air.

The movie is supposed to be a little bit of a puzzle, where we give you bits and pieces, but the audience has to fill in the gaps and come up with their own answers, regarding the main character's back story and his current condition.

DH: What has your experience been like with the festival circuit?

Pretty good. The short played over 20 festivals all over the world. I specially recommend Fantasia and Toronto After Dark up in Canada, Dead Channels in San Francisco, Zompire, Rojo Sangre in Argentina, RioFan and FantasPoa here in Brazil. Attending festivals is key because you get to meet people and spread the word about your work, gauge reactions to your movie too. Basically the exposure is essential.

DH: What's the best advice you can give to people out there who have finished a movie?

Submit it to anyone you can think of. Festivals, productions companies, distributors, agencies, websites, you name it. Don't be shy about knocking on doors and making an effort to get your stuff seen. You never know who might respond to your work, and help in some way. Be willing
to face rejection and take criticism.

DH: What's next for Carlos Gananian?

A feature. I'm writing a number of scripts and trying to figure out what to do at this point. There are also projects that may happen in the US, which is very cool, but those are bigger budgeted, and take a lot longer to move forward.

Something like "Blade Runner" or "Dark City", where I could get to build a whole universe, have total control over the look of the piece and shoot for as long as I wanted. That would be an ideal job.
Posted by mr. toad at 11:00 AM