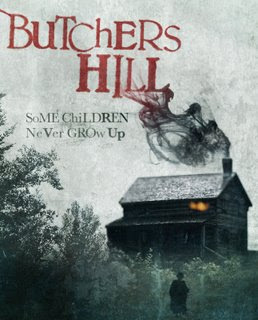 I'm going to take a different angle with our film fest updates by taking a look at three films that we covered a while ago and see how they're doing on the festival circuit, as well as tell you a bit about the festivals they're in. I'll link to everything, so you can go check out all the stuff I'm talking about here.

"Butchers Hill" is a short film that we covered forever ago... well, January 9th, 2008, which is almost forever ago. Here's the link. And since then, they've been doing nothing but kicking some serious ass with it. They've now acquired the support of three major companies in LA and London who have pushed "Butchers Hill" right into the last stages of fundraising. They screened it at "Fantasia Fest", which is one of the biggest genre festivals of the year and, according to them it "was an amazing festival". When it screened, they had a turn out of over 400 people, tremendous cheers and support along with very kind words spoken from chop top himself, Bill Moseley. With that success, they've now been invited to screen at 4 upcoming film festivals: Fantastic Fest in Austin, TX (Sept), Sitges International in Sitges, Barcelona (Oct), Screamfest in LA, (Oct) and Leeds International in Leeds, UK (Nov). Here's a link to the "Butchers Hill" website.

Another film that we covered forever ago was "The Veil", here's the link. Now, the guys behind "The Veil", the Chance brothers, come up with a sci-fi short called "The Day I Tried To Live" not too long ago and, not to take anything away from the "The Veil", but they sure upped their game on this one. "The Day I Tried To Live" was an unreal short film and they did SO much with so little. If you can get a chance to see it, it's well worth it... it's really what low-budget filmmaking is all about. It was last shown at the Portobello film festival on the 3rd of September and it won Best Guerilla film. It also won the Xristos Award at the AOF Film Festival held in Pasadena, L.A. Now, they've made another short horror film called "Chainmail" and it's going to be showing on Satellite TV on SKY 195, Sept 14th @ 10PM and it'll reach an audience of 8 - 14 Million people in Europe and the UK! In any case, these guys are getting things done these days! Check out any of their stuff, if you can. For more info on the Chance brothers, go to their site - chance-encounters.org

Lastly, "Dead Moon Rising" was one of our favorite low budget horrors of the year, mostly because it was just so damned ambitious. Well, "Dead Moon Rising" continues, over a year later, to infect the film festivals. It'll be screening at Scarefest , which is this weekend - Sept 12, 13 & 14 - in Lexington, KY. We've talked about Scarefest, but to touch on it again, they're set to host a lot of great celebrities such as Sid Haid and Bill Moseley from House of 1000 Corpses, Kane Hodder from Friday the 13th, PJ Soles from Halloween, Tony Todd from Candyman, Michael Berryman form The Hills Have Eyes, and many more.
Posted by Dead Harvey at 9:00 AM