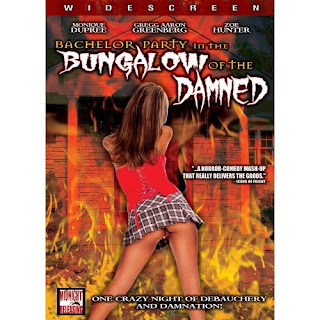 A decent week for horror releases... so, let's get right to it, but not before I remind you that you can click on the titles to buy them off Amazon and/or go to our youtube page to check out some of the trailers.

Right off the bat, I have to say that I love the fact that films like "Bachelor Party in Bungalow of The Damned

" are making a bit of a come-back. As you can imagine, this is true micro-cinema horror at it's best. Produced, written, directed, edited AND score composed by Brian Thomson, it's about a group of guys who go off to the Hamptons for a bachelor party, but after the trio of strippers show up, all hell breaks loose. It's not released by Troma, but there's a lot of Troma ties, as a few of the actors have done a lot of Troma stuff... and even Lloyd Kaufman makes an appearance in the film. Then again, it was filmed in Long Island and I think Lloyd shows up in almost every indie horror that's filmed in the New York area. Long and short, expect horror, blood, guts, comedy... and boobs.

", also called "Skeleton Key 2: 667 Neighbor of the Beast" is not the sequel to the 2005 film "The Skeleton Key", which starred Kate Hudson, Peter Sarsgaard and John Hurt. It is, in fact, the sequel to the 2006 direct to dvd film, "Skeleton Key", which starred Conrad Brooks, Jay Barber and Shirley Bloom. The two "Skeleton Key" films are from writer, director, editor, producer, etc. John Johnson, who's now working on a film called "Plan 9"... and his films are as indie as they get, not to mention they look pretty good. The plot revolves around the town of Nilbog, which has been overrun by zombies, vampires and their lord, Dr. Nochas. If you dare to check these films out, be prepard for blood, boobs and musical numbers. More specifically, songs about soiling yourself and being left for dead.

" is also from the afore mentioned John Johnson and it takes place in the same fictional town of Nilbog. First off, I believe "Deceptors" was originally called "Shadowhunters" and came out in 2004 as part of the "Tomb of Terrors" DVD collection. So, it looks like Johnson just got the rights back and is rereleasing it, which is cool. The plot revolves around a team of conmen running a scam in Nilbog, by creating fictitious monsters and demanding money to get rid of them... until they actually awoke some real demons. I think you can consider this the prequel to "Skeleton Key" and "Skeleton Key 2", although it's really just sort of the first in the series.

" comes from Sridhar Ranganath, or Sri Rang, for short and it's an award winning film, having won him best director at the New York International Independent Film & Video Festival in 2006. Released by Timesignature Entertainment, it's a 65 minute feature that's about an homeless actor given shelter by a mad scientist, who has successfully been bringing dead animals back to life and wants to give it a go on a human. They've got a pretty kick ass trailer, that's more like a music video, featuring an original hip-hop song from the film... we'll have it featured on our Youtube page, where you can also check out all the other trailers for all these films.

", from Marian Dora, actually came out a ways back in 2005, but it's worth mentioning because it was quite a shocking film when it came out. It's a German film, filmed in Germany and, believe it or not, it actually is based on true events. You may actually remember the story, too. Armin Meiwes, a German man, killed and ate a voluntary victim that he found through the internet - he posted an ad that said "looking for a well-built 18 - 30 year old to be slaughtered and then consumed". Well, it happened and it's a really f'ed up story. As you can imagine, the film gets pretty sick, as it delves into the sexuality behind the whole deal, as well. Basically, there's not a lot of talking in it and the last 30 mins or so get pretty twisted.

" is probably the biggest budget horror film release of the week and comes from director Halder Gomes and is being released by Lionsgate. It's got Bill Cobbs in it, who's one of those guys that, once you see him, you know exactly who he is. He's been in everything. The rest of the cast is quite experienced, as well. The film is about six strangers, brought together by a weird series of unusual events, who "latch on to each other at a desolate mortuary in hopes of making it through the night."

" is a J-Horror style film, made by Australians and filmed in China and Australia. It's the directorial debut from Melanie Ansley and the reviews are a little mixed, but the plot sounds interesting... even though it does borrow quite heavily from a lot of recent J-Horror films. Basically, people are getting brutally murdered after they read the 'watch me' attachment that's on an spammed email. That's all very cliched and everything, but there's also a creepy red-headed woman in a yellow dress, some guy named "freak boy" and victims get their eyes sewn shut.
Posted by Dead Harvey at 10:00 AM