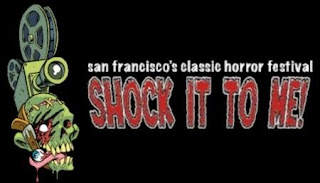 It sounds SO familiar, but I don't think I've ever covered Shockfest (or Shock Film Festival, as it's been called). This is their first year and they are currently looking for documentaries, narratives, music videos that are horrifying, absurd, disturbing and/or controversial. Well, that covers almost everything I've seen in 2008, so far. It takes place in Hollywood this October 24 - 26. Click here to find out how to submit your film (try right click and "save as", it's a pdf) or click here to go to their homepage.

Shock It To Me! grabbed my attention, I had to look into it just because of the title... Now that I have, I can tell you that they're not a competition festival, they just screen old movies. However, they do have a massive dealers and vendors area, which is something I should comment on... Now, take note: just because you can't screen your film at one of these things doesn't mean you can't get involved. Take this festival, for example... you can't screen your film, but you can get a small booth at the festival where you can network, but, more importantly, promote your upcoming films and try to sell your existing films and merchandise (by the way, people at these things are in the mood to buy - you'll probably make more than your money back with a stack of DVD's). Also, who says you can't show people what you're doing? Bring in a little LCD TV and a DVD player and play your films, trailers and other promo footage. Not only that, you also get festival passes to all the films, you get your name on the dealers page (remember, it's about marketing - get your name out there) and you get a link on their webpage, so everyone that checks it out can find you. So, really, if you're in the area of one of these shows, they're worth going to and getting involved with. This one's in San Fran and it runs October 17-18.

That last fest may not be accepting submissions, but Arizona Underground Film Festival IS, although they're only accepting them until September 15th. The festival runs October 17th - 19th in Tucson and they showcase the work of filmmakers with "defiantly independent visions"... and, yes, that includes horror. In fact, they give out a 'best horror feature' and a 'best horror short' award. The entry form can be found here and the homepage can be found here.

Festivus Film Festival takes place in Denver during the second week of January and it truly is the festival for the rest of us! It's really not a horror festival, but I liked the name, they're accepting submissions right now and they're looking for "awesomely badass, truly independent film". So, it kinda fits the bill. I went through last years films and there's not a lot of horror in there, but that doesn't mean they won't accept it. Further to that, they seem like pretty cool guys, you could probably email them and tell them about your film to see if it's something they're interested in. Click here for information on submissions.

Through my unrivaled google skills, I dug up some info on the Amberg Horror Fest, a fest that I've never heard about. However, only ONE page on the web told me something about the Amberg Horror Fest and it certainly wasn't their homepage. Their homepage can be found here, click on that and tell me if it EVER loads. Otherwise, here's the criptic information that I uncovered... It's an international horror film festival that takes place in... well, I'm assuming in Amberg, but I don't really know where that is, so excuse my stupidity. I refuse to look on a map and figure it out. However, it does take place at the Amberg Park Theatre & Ring Theatre and it takes place this October 30th through Nov 2nd.

*a brief correction/update - the site DOES load, it just wasn't working from the computer I was on at the time... it's a very information heavy site, so it may take a while to load, but it's actually a really cool site. Also, Amberg's in Germany, if you were wondering.
Posted by Dead Harvey at 9:00 AM