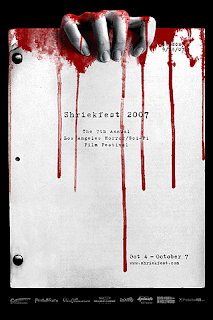 We here at Dead Harvey are steadfast in our devotion to the indie horror filmmaker, we aim to be a complete and full resource for you. That, my good reader, is our goal. Now, whether or not we succeed is another story, but hey... at least you know where we're coming from. As you may or may not know, we've interviewed lots of indie horror filmmakers and have a massive amount of insight and advice compiled in our Dead Harvey Film School section from them, but recently we've been trying to interview people in other facets of the indie horror scene. So, since getting into the festivals is almost as important as getting distribution, we've been concentrating on trying to talk with festival directors. This time around, we talk to Denise Gossett, the founder and festival director of Shriekfest. Shriekfest is both a competition horror film festival and a horror screenwriting competition AND it's one of the best of the year. If you're going to be entering indie horror film festivals, this is one of the 'musts'. For more info, you can go to the Shriekfest homepage here.

Please tell us a bit about yourself… how’d you get into indie horror?

My name is Denise Gossett. I have been in the industry for 16 years, primarily as an actress. I can be seen on such tv shows as "Veronica Mars", "The New Adventures of Old Christine", "Mind of Mencia", a recurring role on "Zoey 101", "Drake & Josh", etc. I am also the founder/festival director of Shriekfest Horror/SciFi Film Festival and Screenplay Competition. I moved to Los Angeles from Orlando, FL.

Tell us a bit about Shriekfest… when and why did it get started?

Shriekfest is in it's 8th year. I came up with the idea to do a genre festival after I starred in the horror film "Chain of Souls". I had asked the director and producer what they were going to do with the film and they said, straight to video and I asked how about festivals? They replied that there weren't really any horror festivals out there...and that's where the idea came from! I told my sister in law my idea and she said let's do it. Since then she has moved back to Michigan to raise her son and her brother, my husband, Todd Beeson has been my partner ever since.

I think indie horror filmmakers need all the help and exposure they can get. I know from the past that films who get in festivals have an easier chance at getting distribution, agents, managers, etc.

Well, Raleigh Studios, where we hold the festival, has an excellent screening facility. We've been told many times by filmmakers that their film has never looked so good as when it screened in Shriekfest. We also invite a lot of distributors, agents, press, etc to the festival and try to get as much recognition as we can for the filmmakers/screenwriters. All year long we get contacted by distributors, investors, agents, etc and I will always refer a project that I personally liked. I still refer films/screenplays from our first year back in 2001!

You can expect to see top notch indie horror films! And, the filmmakers are usually in attendance so you get to meet them as well.

We are looking for good films and screenplays. This means...good quality, good story, good acting...basically a complete package. They don't have to be scary or gory. There are a lot of horror comedies our there too.

Yes, I think you should think of those things, if the festival circuit is your goal. Make sure it's a quality product. Make it tight...don't submit films that are over 2 hours...even studio films that long can rarely hold one's attention. Think of the audience that the festival attracts. Check out some of the other films they've received to see the quality that they accept. What part of the country is the festival?

Are there any particular success stories from films that screened at Shriekfest?

Oh, there are tons! We have a whole page on our website that talks about some of them. (find that here) I would say that every feature that has screened at Shriekfest has gotten distribution and a lot of the shorts have as well...because dvd compilations are very popular right now. People have gotten agents and sold scripts too!

Be persistent, don't give up. Let's keep raising the quality of the horror films out there...horror deserves the same respect that any other genre gets. Make what you love and don't ever give up on your dreams!

Well, with all of the new technologies, I see indie horror really going far...I see the films looking better and better and with horror losing it's stygma, we are now seeing more and more top quality actors willing to act in horror films. I think it's getting smarter too...not every horror film is the same anymore, we are getting more intelligent with the horror films/scripts.

What’s next for you and Shriekfest?

For me, I am starring in a Western film in the next month playing a gunslinger and then after that I have another film I'm working on called Take One. (DH - check out denisegossett.com) And for Shriekfest...more of the same and bigger and better things...some things are in the works...it will be a big surprise.

Where can people find out more about Shriekfest and how can they go about entering their film?

shriekfest.com - Entry form and all the info is on the site...plus google Shriekfest and check out past press articles and past reviews from filmmakers and screenwriters. You can tell alot about a festival by what people say about it who aren't involved with it.
Posted by Dead Harvey at 9:00 AM