September 23, 2008 - New Horror on DVD this week, which includes Argento directing his own daughter in sex scenes in "Mother of Tears" 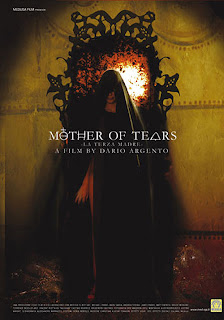 From my perspective, it's a little bit of a weak week, so to speak. I mean, there's some great releases, including Argento's "Mother of Tears" and The Pang Brothers "Re-Cycle", but there's NO real indie-horror this week! Bummer. Having said that, there's some good stuff to check out. As usual, if you want to help us out and buy the films off Amazon, through our site, please click on the titles. Also, go check out all their trailers on our Youtube page.

So, yeah, "Mother of Tears

" is the big release of the week, even though most of the public has no idea of what this film is about and will just be picking up the Dr. Sexy film, "Made of Honor" when they go to Blockbuster. "Mother of Tears" is, of course, from Dario Argento and is the last intallment of "The Three Mothers" trilogy, which started with "Suspiria". It's great that this is finally done and out, as Argento's been threatening to make this film since the 80's, but it didn't finally go into production until October 2006. Unfortunately, it was never really promoted that heavily and it had a limited theatrical run in June of 2008. For me, the best thing that comes out of a film like this, aside from the knowledge that he had to direct his own daughter in some serious nude scenes, is the fact that a lot of people will now look back on Argento's work, which includes some absolute classics, such as: "Susperia", "Inferno", "Phenomena", as well as collaborating on "Demons", "Demons 2", "Zombi" and even the original "Dawn of the Dead". Any way you slice it, Argento's a classic, deserves a ton of credit and his latest film needs to be checked out... even though he's a sick bastard for directing Asia through some sick, twisted nude scenes. (check out the trailer)

I totally forgot about "Pathology

", but here it is on DVD, already... where does the time go? It was directed by Marc Schoelermann and had a limited release on April 18, 2008 and it has a decent cast, including Alyssa Milano, Milo Ventimiglia (from Heroes), among others. It's about a group of medical residents studying pathology who devise a deadly game; to see which one of them can commit the perfect murder. It's from the same guys who wrote "Crank" and "Crank 2", there's nothing really indie about it or anything really interesting, either, so... moving on.

" is another Sci-Fi orginal, this one starring Tara Reid, directed by Bill Corcoran. To quickly gloss over this, it's about a group of genetically enhanced vipers on the loose after a break-in at a medical research lab... and these vipers don't just bite, they eat. Next.

Here's something you need to check out... "Re-Cycle

" is an award winning film from Oxide Pang Chun and Danny Pang, otherwise, known as "The Pang Brothers". They're the guys behind the original "The Eye", the original "The Messengers" and, even, the original "Bangkok Dangerous". "Re-Cycle", known as "Gwai wik" in it's native Hong Kong, won the international fantasy film award at Fantasporto and various visual effects and sound effects awards at the Hong Kong Film Awards. I haven't seen this yet, but I'm a huge fan of the Pang Brothers stuff, so this is going to be a must-see for me. Go check out the trailer on our Youtube page, it looks f'ing awesome. If you're into visual, surreal films, this should be one for you. It's about an author who see's the main character from her book, follows him, then gets trapped in his world of terror.

" is not the film starring Sigourney Weaver from a few years ago, this one comes from Lionsgate and it was directed by Andy Hurst, who's made a bit of a career from writing sequels. He wrote "Wild Things 2", "Wild Things: Diamonds in the Rough" and "Single White Female 2: The Psycho". This is not his directorial debut, though. He made a couple films in Germany "Project: Assassin" and "You're Dead", before make the North American film, "Are You Scared", which I saw... and was not scared. "Copycat" was originally called "Diary of a Serial Killer" and it's about a journalist who is tormented by the serial killer who took her mother's life. She investigates the only clue he ever leaves behind at his crime scenes, his diary pages.

" is a Japanese film, originally called "Densen uta" and it's about the urban legend that there's a song that fatally affects its listeners. It's directed by Masato Harada, who's done a ton of films, but none that I've heard of. "The Climbers High"? "The Shadow Spirit"? "The Choice of Hercules"? "Bounce KO Gals"? Okay, I'd check out that last one, for sure.

If you're into history of horror film and, more specifically, the history of the vampire movie, you may get a kick out of "Blood Sucking Cinema

", a documentary from Barry Gray. It's only 57 minutes long, but it has interviews with Stuart Townsend "Queen of the Damned", Len Wiseman "Underworld", John Carpenter "Vampires", Joel Schumacher "The Lost Boys", Kristanna Loken "BloodRayne", Corey Haim "The Lost Boys", John Landis "Innocent Blood", Leonard Maltin and "Ain't It Cool News" own Harry Knowles.
Posted by Dead Harvey at 9:15 AM