New Horror Out On DVD This Week... 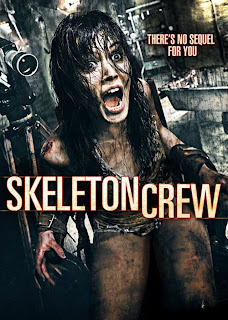 I'm not going to lie, it's not the best week in new horror releases. In fact, it was a little tough to come up with what I would consider to be 'the big release of the week'... but there is new horror out, so if you're if you're plum out of shit to watch this week and you don't want to go see the new Harry Potter film again, don't fret. You should be able to find something here. Having said that, looking forward... I think next week will be a bit better. Anyhow, feel free to click on the titles to go to their Amazon page, where you can read more about them and/or buy them. Also, head over to our Youtube page to check out the trailers.

I guess that "Messengers 2: The Scarecrow

" is the big release of the week, but I'm loathe to say that... as, well, that's just embarassing. I don't want to take anything away from it, but it sucks when the biggest horror release of the week is a straight to DVD release that was filmed in Bulgaria. So, yes, this is the prequel to the Sam Raimi produced, Pang Brothers directed film "The Messengers", which came out in 2007. This one is directed by Martin Barnewitz and the plot revolves around John Rollins, the simple North Dakotan farmer from the first film, who struggles to save his farm and keep his family together. So, he puts a mysterious scarecrow in his field, which comes to life and starts killing everyone who gets in its way. On a postive note, the scarecrow does help save the farm and change the farmers luck.

Bare with me on the names here, they're Finish and all sound the same (only one actually repeats), but... written by Tero Molin and Teemu Molin, directed by Tommi Lepola and Tero Molin, "Skeleton Crew

" comes out of Finland and it's one of those horror films about horror films, that references horror films. Basically, a skeleton crew goes into a mental institution to shoot a horror film about the events that took place there, but when they uncover something from the basement... things go awry. Judging from the trailer, it looks like "Saw" meets "Haunted Hill" with lots of references to mainstream horror films. Looks kinda gory, could be good.

Personally, I think Ted Bundy has had enough films done about him, but... if you're aching for more, here's another. Originally called "Bundy: A Legacy of Evil", then "Bundy: An American Icon", the film is now being released as just "Bundy

". I like the fact that both Kane Hodder and David DeLuise made it into the film, which is very cool. However, I'm not too cool with the fact that it looks like they're trying to do a bit of an "American Psycho" with the way Bundy's portrayed. There's only one Patrick Bateman and he's fictional... and he's Batman. They drive it home with the tagline, "Charmer. Liar. Serial Killer". I could be wrong with that assumption, but the trailer sure sets it up that way.

I couldn't find the trailer for the indie horror "Skare

" on Youtube, which comes out of Britain, directed by Michael J Murphy. However, if you really want to see it, you can go to Sarcophilous Films Releasing's site to check it out, find that here. I believe the film is basically about a lady named Martha Tennant, who serves food to the Skare Valley Country Club during the day and harbors escaped prisoners at night... nudity, gore, low-budget - our kind of film.

Last new release of the week is "Ghost Month

", written and directed by Danny Draven. It's about a housekeeper that's drawn into a terrifying world of vengeful apparitions... restless spirits come back to mix with the mortals, looking for people to take their places in hell.
Posted by Dead Harvey at 8:58 AM

Sorry to read you couldn't find the SKARE trailer on YouTube. Hope you managed to check it out via our website though yourself in the end?

The DVD has been set back a little while we await the artwork to be finished. End of July was the original estimated date, but looking more likely to be towards the end of August now. Still, i am sure you will enjoy it!

Check out the trailers for ATLANTIS and THE RITE OF SPRING on YouTube and our website also....really gems! Can't wait to release these bad boys!