New Horror Out On DVD This Week, including OC Babes and the Slasher of Zombietown 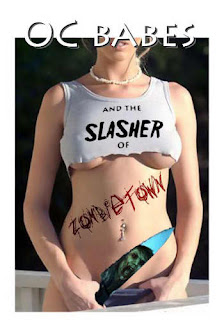 So, the biggest news from the weekend was that "Bruno" was a bit of a flop... well, not a flop, it still hauled in approx $30Million, but it had the steepest Friday to Saturday drop on record. Meaning, it took in $14.4Million on Friday to just $8.8Million on Saturday. That's a 39% drop. Reason being? Probably the so-called 'Twitter Effect', which means that the film was judged instantly, everyone posted, tweeted, facebooked and myspaced about how it wasn't as good as "Borat" and, thus, a major drop off - the next day. Moral of the story? Social and new media is making you accountable. Be good... or people will know and they'll know fast - instantly, actually.

Let's look at what's coming out this week, horror-wise. As usual, you can click on the title and go to the films Amazon page, where you can read more and/or buy them. Plus, you can go to our Youtube page and see the trailers...

So, the biggest budget release of the week is definitely "The Haunting in Connecticut", which is coming out as both an Unrated Special Edition

and in a Single-Disc Edition

. It was written by Adam Simon and Tim Metcalfe... and I think Metcalfe's biggest claim to fame may be for writing "Revenge of the Nerds", but he also wrote "Kalifornia", "Killer: A Journal of Murder" and... "Revenge of the Nerds" the TV Show, "Revenge of the Nerds III: The Next Generation" and "Revenge of the Nerds IV: Nerds in Love", which is a classic. The other writer, Adam Simon, was the guy behind "Carnosaur" and "Brain Dead", having written and directed them both, as well as some other projects. The film was directed by Peter Cornwell, who won a pile of awards for his short animated film, "Ward 13", in 2003, but "The Haunting in Connecticut" would definitely be his biggest project. The film did alright at the box office, although it was fairly poorly received. It was released by Lionsgate and is based on the 'true events' around the Snedeker family's encounters with the paranormal in Southington, Connecticut.

" or "The Horsemen", as the cool kids are calling it, is another Platinum Dunes horror from Michael Bay and crew. What's funny is, the reviews are alright on this film and the reviews were brutal on Platinum Dunes other film that came out around the same time, "The Unborn" ("The Unborn" WAS brutal, by the way), and this film has some serious talent in it, such as Dennis Quaid, Peter Stormare and Zhang Ziyi... yet, "The Unborn" got the wide release and this got a limited release. Strange. Anyhow, "Horseman" is about a bitter detective, played by Dennis Quaid, who is investigating a series of murders of rare violence when he discovers a terrifying link between himself and the suspects in a chain of murders that seem to be based on the Biblical prophecies concerning the Four Horseman of the Apocalypse... who are drawing nearer. On leather steeds they ride... they've come to take your life. On through the dead of night, with the four horsemen ride... or choose your fate and die! Can't resist a Metallica reference.

Rounding out the new releases of the week, you'll also be getting the indie horror "OC Babes and The Slasher of Zombietown

", written and directed by Creep Creepersin... but I'm pretty sure that's a pseudonym. It looks like "OC Babes and The Slasher of Zombietown" is his first film, but he's on a massive tear right now... this came out in 2008, then in 2009 he put together "Peeping Blog", "Creep Creepersin's Creepshow", "Creep Creepersin's Frankenstein", "Caged Lesbos A-Go-Go", "He", "Vaginal Holocaust" and a few others... if you want to know how he does it, apparently this whole film was shot in 8 hours. Having said that, the trailer looks pretty good and if micro-cinema horror is your thing (and we hope it is), it looks like this film will deliver. The film is about a group of OC stereotypes, who are trapped in a bar due to a zombie outbreak... and they happened to be trapped in there with a slasher. The trailer's not on Youtube, but you can find it here, on Myspace.

There's a couple of notable Blu-ray releases, if you're into them: I Still Know What You Did Last Summer [Blu-ray]

and A Haunting: Twilight of Evil [Blu-ray]

And if you like T-Shirts with your movies, you can order the Night of the Living Dead DVDTee, which comes in Size L

Hello..
a found a great place to find nice products at cheap rate at [url=http://50off.reviewazone.com/]discount coupon[/url]
Have Fun

quite interesting article. I would love to follow you on twitter. By the way, did you hear that some chinese hacker had hacked twitter yesterday again.

This information is very interesting, I really enjoyed, I would like get more information about this, because is very
beautiful, thanks for sharing!