The Future of Indie Horror and How To Survive The Singularity 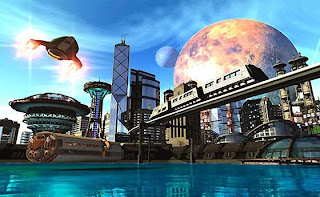 Okay, I have no idea on how we're going to survive the singularity, but I DO have some ideas on the future of indie horror... which should entertain us until the robots do take over in a few years. I mean, not only is it one of the most asked questions of us... it's also one of the questions we ask the most, "What is the future of indie horror?" We're unwavering in our belief - there's a big, bright shiny future for it. However, a lot of people think that the economics just aren't there. It's a big debate and only time will tell the answer, but keeping that in mind, I'm going to make a couple of not-so-bold statements...

1. The idea of full-motion as a format, whether it be animation, video or film, isn't going anywhere.

I think we can all agree on those two statements, right? So, what can we take away from that? Well, I think it's safe to say that, in one form or another, you will always see stories in a full-motion format... at least for the foreseeable future. All the other factors may change, though, like: how we watch it, where we watch it, what format it's in, how it's displayed, etc. But I do think it's safe to say that there will always be stories to be told... and film/video will always be a medium used to tell them. How it's distributed? Different story.

Really, if you think about it, at the root, we really just want to be storytellers and, right now, we're just using film as the medium to tell it. So, as the industry is being shaken to its knees and we wait to see what rises from the ashes, we need to keep telling our stories, in a full-motion format, one way or the other... which brings me to this article. The article goes through three different stories being told using three different formats, all of which use the web as their distribution format. Are they financially successful? Do they have big audiences? I don't know, but they're telling stories in innovative ways and innovating is something that we should all be doing... until the robots kill us all.
Posted by Dead Harvey at 8:35 AM