Interview With Andrea Ricca, Writer/Director of "The Guardian" 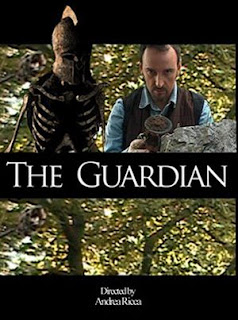 If film was a family and Hollywood was the big daddy, I'd like to say that micro-cinema is the social outcast, metal-loving, half-midget cousin that lives way out in the 'burbs and plays video games all day, but... that would assume that Hollywood knows that micro-cinema exists and acknowledges that it's spawn of its own family, which it doesn't. The result of that is, if you're looking to make a career in filmmaking, making micro-cinema film is the equivalent of wanting to be a top-tier chef, but just getting a job at Wally Burger and thinking, "well, I'll work my way up". I'm not discouraging making micro-cinema films by any means, I mean, what would I do without them? What I'm saying is, if you're looking to make a career in filmmaking and you're currently making micro-cinema films, there's a few things that you need to be doing. First up, you need to be making stand-out films; second, you should always be networking and talking with anyone who will listen; and third, holding an industry job or getting an industry skill won't kill you. My point (and weak segue) is that there's one skill set that's in high demand right now that can help you across a lot of these facets and that's a knowledge of computer generated visual effects.

I was just reading about Alex Alvarez, the founder of the Gnomon School of Visual Effects in Hollywood. Each year, over 90% of Gnomon grads found jobs within 90 days, which, as they say in the article, makes it as close as you can get in Hollywood to a sure thing. In fact, working in or having knowledge of computer generated visual effects is a hot, hot commodity in Hollywood and can open lots of doors. That's why I was particularly excited to talk with Andrea Ricca, a filmmaker from Italy, about his short film, "The Guardian". It's not blood-soaked, there's no nudity and it's basically G-rated, but it's entertaining, it's well put together and it's a great showcase for his CG skills. If you're interested in CG, you'll probably want to give it a read, as he does get into how he put it together, about the software he uses, as well as some links to behind the scenes stuff.

Read through the interview, as there's also a link to the film itself, which is only 4 mins, and he offers up some great insight on the CG world.

Tell us a bit about yourself, what are your influences and what got you into film?

I’m 35 years old, I live near Salerno (Italy) and I have a degree in Sociology. When I was 16 I began to work as a designer of didactic and social comics. Then I specialized in 3D graphic and collaborated with several firms, among them the Giffoni Film Festival. For Giffoni I did some 3D cartoons and spots. Here you can see one spot for a nutritional campaign:

Recently I worked in several rules in local TV as director and cameraman and editing. At present I’m working for some advertising agencies to realize interactive DVD. Since many years I began to realize short movies for passion. But before “The Guardian” it was essai movies.

Here you can see some example: sample 1, sample 2

I was inspired by Conan Doyle as regards literature and the gunreachables Spielberg, Lucas, Zemeckis, De Palma, Oliver Stone, Ridley Scott. They have the ability to mix classic style and innovation to create ex-novo some imagery “topos”. I discovered Ray Harryhausen when I was a child and saw “The mysterious island” on Tv, and there began my interest for special effects. Among his films I prefer “Jason and the Argonauts”, “Clash of the Titans” and “Sinbad” because they materialize the fantasy monsters in a realistic style .His talent consist not only in the animation but also in his wonderful composition of special effects and real scenes.

I decided to make “The Guardian” and “Ufo Race” to put together my love for adventure movies, for short movies and my experience in 3D graphic. In the latest century literature has given to cinema the task to create the mass imagery and I would like to give the audience the mix of adrenalin and astonishment that an adventure-fantasy film can give us.

I take part in some cinema stages, among which the stage of the Italian director Giovanni Veronesi, the stage of an important Italian film school: “Nuova università del cinema” and some other experiences. But not schools.

Tell us a bit about your short film, "The Guardian"

That is a zero budget adventure short movie shot in Salerno, Italy, in the autumn 2008, near the ancient “Arechi” castlel (VII d.C.) The work involved one director (Andrea Ricca), one actor (Michele Di Mauro), one assistant director (Antonella D’Andria), one minidv cam, one pc and the software 3ds max. Writing, shooting and editing are made by myself with an help of my girlfriend Antonella D'Andria for the real shooting. For the 3D I made all by myself.

What was the budget for the film, how long was the shoot and what did you shoot on?

The two short are shot with zero budget. About 25 euro for "The Guardian" and less for "UFO RACE" : )

The short had a lot of CG effects and they were very effective. What did you use to create the effects and how long did the post production take?

I used the software 3D Studio Max for the 3D, Premiere for the editing, and a MiniDV cam for the real scene. Here a photogallery about the backstages of the shorts:

Talk about shooting footage, knowing that you're adding CG effects after, especially as you were dealing with a low budget... what were some of the hurdles there?

The more difficulties came from the fact that we shoot in “guerrilla style” on the way without permission. For the 3D the trouble is that I made all by myself and that delays too much the work times.

Why did you set out to make a short, effects driven film? Has it opened any doors or furthered your career?

Still now I received a lot of good reviews from the magazines, online or paper.
Actually the CGI bring a lot of attention on it. For short movies we have very few financial helps. The bureaucracy is very difficult. I made in this days a cultural association with some friends for acceded to some funds. But I don't hope much! I hope in private producers.

Where can people watch "The Guardian"?

I published my shorts on You Tube, but I’m submitting them to some Festivals, because the web allows you to have a greater and more rapid feedback from the audience. Besides it can be an international audience. At last in Italy there are a not many Festivals interested in no essai movies.

Check out "The Guardian" here.
Also, check out another one his short films, "UFO Race", here.

What's next for you? Are there any more projects in the works?
My next idea regards a sort of fantastic and ironic story about little monsters like Gremlins, Critter etc. Another idea is about a volcano eruption, but now, before starting something, I’m waiting for some new inputs, like to got some collaborators for the effects.
Posted by Dead Harvey at 8:50 AM

Merry Christmas! Let the new year will bring a lot of money

I really liked your article.


You should take part in a contest for top-of-the-line blogs on the web. I will recommend this website!