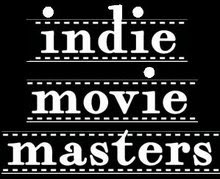 This really is an interesting turn of events... Dead Harvey's Brad and, yours truly, Ted, were interviewed by Stephen Zimmer of Indie Movie Masters. We've talked with many people informally and a lot of industry people have asked our opinions on things, but never before have we actually been interviewed. What I found funny was the fact that when he sent me the questions, I was down in LA... then I was super busy up here and I just couldn't find time to finish up the interview. He emailed me a few times, asking when I'd be done and, finally, I finished them off. What I find funny about that is NOW I know what it's like to be on the other side of the interviewing table. Funny, but... probably extremely frustrating for Stephen. Sorry about that.

Anyhow, I'll tell you a bit about Indie Movie Masters. Really, they're a new collection of indie films organized into genre-specific series and they distribute them themselves through DVD and emerging new media, such as video on demand. They've got a couple titles out now, but they're looking to do a lot more. They're a series designed by indie filmmakers for indie filmmakers. Gotta love that. That's enough, but wait, there's more... they ALSO run a blog where they talk with people in the indie film world and pick their brains, so to speak... and that's where the interview with us comes in.