A Look At The New Horror Coming Out This Week, Including some Award Winning Films 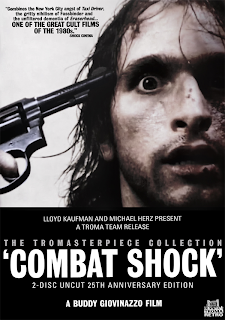 Well, Brad went to Comicon, but I didn't... even though I felt like I did. Jesus, if you even mildly use any social networking tools, you were just inundated with news from Comicon all weekend. From Comicon's perspective, it's a real testament to how well things like Twitter and Facebook can work... I mean, I felt like I was there and now I'm thinking of heading down next year. Talk about being kept top of mind. Anyhow, most people didn't notice, but a horror film WAS released in the theaters and... it didn't do so hot. "Orphan" came in fourth, grossing just under $13Million, getting pummelled by the Jerry Bruckheimer Gerbil movie, "G-Force"; "Harry Potter" (which is in its second week) and "The Ugly Truth", the romantic comedy with Katherine Heigl and Gerard Butler. For what it's worth, though... the reviews on "Orphan" were alright - in your face, "G-Force"!.

Anyhow, to what's important - this week's horror DVD releases. There's actually not a lot of new releases, but there's some pretty fucking cool rereleases. I dug up some of the trailers for these old films and you can see them, plus the other trailers, on our Youtube page, which can be found here. Otherwise, as usual, click on the titles to be taken to their Amazon page, where you can read more about them and even buy them, if you so desire.

" is an award winning Australian horror that looks down-right awesome and I really love the premise, so I hope I do it justice when I explain it. It's directed by Jon Hewitt, written by Shayne Armstrong, Shane Krause, with additional writing by the director. It got second place in the Horror Jury Prize at The Austin Fantastic Fest and took home three awards from the Melbourne Underground Film Festival. The plot revolves around James and Mark, who are constantly being bullied and finally decide to stop being the victim and kill their nemesis... that's when they stumble upon a serial killer who, they figure, will do the killing for them. You have to check out the trailer or read about it, really... it looks great.

" is another award winning film... directed by Adam Wingard and written by E.L. Katz, Lane Hughes and Wingard. It won the jury award at the Boston Underground Film Festival and the grand jury prize at the Indianapolis International Film Festival. It's about the lonely and disjointed life of Daniel, a young Alabama pill addict, as his efforts to cope with the trials of his day-to-day life collide with the increasing influence of murderous and displaced spirits that inhabit his home.

" didn't win any awards, but it was nominated for best film at the Buenos Aires International Festival of Independent Cinema. However, once you hear the plot, it may just jump to the top of your 'to see' list. It's about a guy who falls in love with Fanny, a sheep from his family's vacation ranch, and then starts killing and grinding people up and feeding them to his new 'partner'. Say no more, it's in the queue!

", which has all three films from cult director Greg Lamberson, plus a new rock-n-roll zombie icon "mini-movie" called "Johnny Gruesome", that stars Misty Mundae. The three films are "Slime City", "Undying Love" and "Naked Fear", if you weren't aware.

" lately and, maybe, with good reason. It originally came out in 1985 and it's basically the balls-out, Troma version of "Taxi Driver". I had totally forgotten about this film until I saw all the press on it and, if I remember correctly, it's pretty good. So, they won the battle with me, I'm definitely going to check it out again. We've got the trailer on our Youtube page, take a look.

Other than those films, there's a pile of notable rereleases, including: The Roman Polanski directed Repulsion- Criterion Collection

from 1970 and, lastly; Neither the Sea Nor the Sand