New Horror Out on DVD This Week: With Deadly Jewish Ghosts 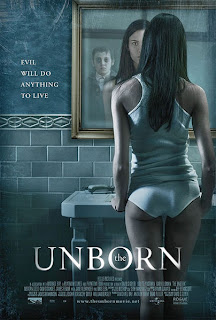 Well, here we are... another Monday, which means a couple things: Time to sober up a bit and it's time to see which new horror movies come out this week. Really, there's only a handful of horror movies, but sometimes that's enough. Unfortunately, the best part of "The Unborn", which is easily the biggest release of the week, is the fact that they kept exploiting Odette Yustman's 'features' for all the marketing material - see pic. In any case, there's definitely some interesting releases this week and, as usual, you can click on the titles and go to their Amazon page for more information and/or to buy them AND you can go to our Youtube Page and check out all the trailers.

" is, by far, the biggest release of the week and, really, it's not that great. It's exactly what you'd expect from a Platinum Dunes released, PG-13 Horror about a Jewish ghost. What's funny is, it's really the first Platinum Dunes released film that wasn't a remake and the reviews were absolutely awful and it didn't do that great in theaters... maybe they should stick with remakes? It's a shame that it is what it is, as it's written and directed by David Goyer, who's a massive talent. Goyer is a screenwriter, director and comic book writer. When he was first starting out, he wrote some classics, including "Death Warrant" and "Demonic Toys", but was also responsible for writing some all time classics, including: "Dark City", "Blade" and "The Dark Knight". As far as other things that he's directed, he also did "Blade Trinity" and "The Invisible", among a few others. What kinda cracks me up is that the film is about a dybbuk that looks to use the Odette's death as a gateway to the physical... don't know what a dybbuk is? Don't worry, neither did I. It comes from Jewish folklore and it's a malicious possessing spirit, believed to be the dislocated soul of a dead person. Thus, a Jewish ghost. In any case, the film stars Odette Yustman as the lead, Casey Beldon, and also has Gary Oldman as the Rabbi Joseph Sendak.

", out of the UK, won the B-Movie Award from the B-Movie Film Festival in 2007 and it's being released by Lionsgate today, so I'm assuming they picked it up after a bit of a festival run. Also, it could've been out in the UK for a while and its just now getting its North American release, who knows? I haven't seen it, but it looks great and the bar has been set high for UK based horror these days. It's written and directed by David Bryant, Sebastian Smith and Richard Stiles and it looks like they all shared duties when it came to getting the film done, as they all played roles as DP, editor and even in the sound department. It's about four city slickers that end up in the woods, haunted by a deadly force... one that will have them discover the true nature of fear.

" was originally called "Angel of Death", which is a wicked name... but only because it makes me think of Slayer. "Angel of Death" was an online action webseries that starred Zoe Bell, Lucy Lawless and Ted Raimi and it originally premiered on March 2 as a 10 episode web series on Crackle.com. It's now being released as a 90 minute film, subsequently called, "Night Stalker". It's about Zoe, a remorseless assassin, who starts to hallucinate and becomes haunted by her victims and then is driven to seek revenge on her employers, the mob bosses. Check out the trailer, it looks pretty f'ing good.

After that, you have the Japanese film, "One Missed Call Final

", from Tokyo Shock, which is about kids forwarding deadly photo's in order to save their own lives... then there's the Blu-ray release of the 1977 classic, "The Deep [Blu-ray]

" gets a rerelease... which could be it's second or third rerelease? In any case, Platinum Dunes is 're-envisioning' it and you'll get an updated version in a couple years.
Posted by Dead Harvey at 8:49 AM