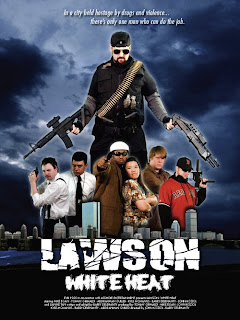 If you're into podcasts or listening to National Public Radio, you may know about KCRW's "The Business". If you don't know about it, you should check it out... Great resource for what's going on in the industry. Here's a link to their homepage. Anyhow, I was just listening to their most recent show, called: "Which Way, Studios?", and it got me thinking about the indie horror scene. To sum up what they said on the show - adult movies are dead, the star driven film is dead and big concept, family movies like "Transformers" and "Harry Potter" are in... Long and short: The audience is changing and as the studios are publicly traded companies that need to make money with each film, they need to adjust their strategy... which will involve taking less risks and making less films... and the sky is falling. Really, there's lots of factors, but their new strategy is quite simple: spend less than you make.

While these guys were flipping out, saying that this will kill the medium of film and we won't see adult dramas and quality films anymore, I was thinking about how these 'new' principles have been driving indie horror for a while now. Only difference is, indie horror doesn't use those principles by choice... it's by necessity. Indie horror, by and large, is made on shoestring budgets with limited resources because that's all we have. Now, here's the joke... A lot of the time, I'm more entertained by a film that's shot for $2,000 than a film that's shot for $20Million. Take a look at "Lawson: White Heat"... a film that I checked out a couple days ago, right after I watched Alex Proyas' "Knowing". Low-budget? Check. Cheesy effects? Check. Amateur actors? Check. Entertaining? Big f'ing check. Written by Barry Delehanty and directed by Barry and John Koziol, both of whom play small parts in the film, the film is a parody of late 80's, early 90's action films like "Lethal Weapon" or "Die Hard". I mean, you're not going to get swooping crane shots and ILM effects, but the film is hilarious, has some great action and decent, low-budget effects and, at the end of the day, I was actually more entertained by this film than the $50Million budgeted "Knowing". Now, that's something that the studios should take note of. How about concentrating more on making films that are actually entertaining and less time on counting those beans?

So, "Knowing" was a bit of a let down, but "Lawson: White Heat" is a great, indie action/comedy and we had the pleasure of discussing the film with co-director and writer, Barry Delehanty.

First off, tell us a bit about yourself. What are your influences and what got you into indie film?

I grew up and still live in Boston. Since I was 15 or so myself and a group of friends used to just turn on the camcorder and make atrocious slasher movies. They turned into complete jokes with some random masked killer or a styrofoam dick killing everybody in some comedic way.

As far as movie influences: Night of the Living Dead and the first two Halloweens were great when I was a kid. As you can see by the movie however, offensive, vulgar comedy is right up my alley.

Unfortunately I was stupid enough to sell my life away and went to school. If I could go back, I'd have dropped out after the second semester after learning the basics, saved some money and just got out there and learned by doing. I made a great friend and I guess mentor in my writing teacher, but otherwise I was surrounded by a bunch of pretentious ego maniacs who's parents bought their equipment and have done nothing to support their egos. Live and learn I suppose.

Tell us about your film, “Lawson: White Heat”

We did a short for the National Film Challenge and had a blast doing it. We took the concept of the supercop, terrible villains and even worse cops and wanted to make a feature out of it. In it's initial concept it was goin to be a bit more serious, but as with everything we do it quickly turned into a comedy.

What was the budget for the film and how long was the shoot?

I don't think people believe us when we say it cost around two thousand dollars. This was as low a budget as you can get, and it was a cumulative amount over the span of the shoot which was about two and a half years.

We had lots of location issues (specifically getting a place for the big warehouse showdown at the end), and not only that, we all have regular day time jobs that barely pay the bills. Basically when a weekend became available and worked with everyone schedule, we'd turn on the camera and get a scene done.

The characters were classic, led by my personal favorite, Chief Coffeestache. Talk about the casting process and getting actors ready for a project like this.

This is another thing that's good about doing the movie with friends. We had a pretty good idea that it'd take some time to finish. Instead of holding auditions and pretending we are some great production company, we knew we would be in front of the camera, and behind the camera. The rest of the cast was filled in by coworkers who were cool enough to help out, and hopefully had fun in the process. So pretty much everyone you see on screen aren't "real actors"

One thing that really sold the film for me, and something that most people wouldn’t notice, was the set design. A properly dressed set can really hide a low-budget. Was this a conscious decision?

Yeah absolutely. We had no money, so we'd literally scout areas and find scummy looking places to shoot. The parking garage for instance. We shot there for a few hours at night and didn't see one car. Find a place like that and you're golden.

We didn't have permits or anything like that either so it was a get there, shoot, and leave. If police or anybody showed up, a good excuse was that we were working on our senior project.

As far as inside the warehouse, which I think most of the set design took place, it was also a necessity. We couldn't get a place after all this wasted time, so we use a basement. The same 15x15 space over and over. We'd reset up the room over and over and make thing look different. Try to have different themes and looks, like the cocaine lab for instance. After it was shot, I did some color changes on certain rooms to help out with that as well.

Like you said, it was a good way to stand out, and not be a run of the mill three location indie movie about someones personal opinions on life. We just wanted to make a brainless, and hopefully entertaining movie.

Another thing that you did a good job on was the effects. There was some good blood, you did a great job on the gun effects. Talk about creating the effects and making them as believable as possible.

Initially, we didn't want any CG or compositing effects. How quickly did we change our minds when the thing we tried flopped like an old mans cock.

Eventually, we hit a nice compromise of mixing compositing with real blood effects when possible. Many thanks to detonationfilms.com for supplying indie bums with kick ass effects for cheap, and the majority for free. I recommend anybody looking to do an action movie, take a look at their site.

So everything as far as digital effects was done strictly in final cut, no after effects, and all composited. The magic of movie making was completely spoiled from me when I realized how easy it was to learn.

Is it going to screen at any festivals? Is the festival circuit something that you’re interested in?

We've submitted to a few and the rejections are starting to come in. I don't think there are many festivals that could fit in a movie like this. There are a select few that MIGHT, seeing as it's not your typical indie fare. Waiting to hear on some of the underground fests and the Toronto After Dark fest.

Realistically though, I think it's a waste of money as we are paying people to watch the movie and get a letter that say oh great job! But you lose. For all we know it's a 60 year old woman who watched and it doesn't appeal to her. Who knows.

How’s the distribution process going? What stage are you at now and what’s your goal?

We are putting the finishing touches on a few special features and the whole DVD packaging and stuff. We are just doing self distribution for now. From all the stories I hear, and even read on this site, we don't really care to have someone else fill their pockets from our hard work.

Secondly, we made the movie not even expecting to make money as much as we wanted people to see that you can make a half decent movie without a million bucks.

Where can people find out more about “Lawson: White Heat” or, better yet, buy a copy?

We have a site with some of the clips from YouTube. Bogus character bios and things like that. People will be able to order the DVD through there when it's ready - LawsonWhiteHeat.com

There's a myspace but it's ghost town on there these days. Search facebook. It's all over as the Internet was our main way of getting it out there.

What’s next for you? Any more projects in the works?

For me, I'm trying to get a job. Outside of that, I'm doing a ton of writing. Working on a raunchy comedy with the guy that played Coffeestache.

As far as the collective group of us, we are getting ready to do an Internet sketch/late night parody show. Full of ridiculous shit and probably going to offend tons of people... If we're doing things right.
Posted by Dead Harvey at 10:05 AM

Very thoughtful, had a great time reading your post