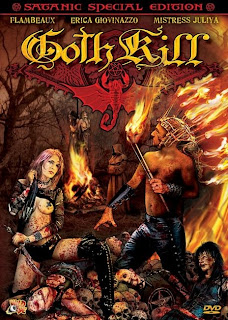 It's a long weekend and I think that most of you have a lot better shit to be doing than reading this, so I might just leave it up for a couple days, then post something new on Wednesday. We'll see... you never know. Thinking about it... I'd actually like to see some stats on DVD rentals and sales through the summer. We all know that summer is the biggest season for theatrical releases, but that's due to the fact that kids are out of school. However, I have a hunch that DVD rentals and sales may go down through the summer. First off, due to the fact that the summer season is so big for theatrical releases, this may steal some of the DVD audience. Secondly, the weather's better and the days are longer, so... there's more shit to do outside, which should mean less sitting inside and watching movies in your living room. Stats shouldn't be hard to find, so I'm going to snoop around and see what I can come up with. I'll report back after a bit of market research...

In any case, there's a couple of decent films out, but, all in all, it's not that great a week. I mean, there's only four new releases. As usual, though, click on the film to be taken to its Amazon page and/or go to our Youtube page to see all the trailers.

I shouldn't pass judgement on a film before I've seen it, but I think I know what we're in for with "The Devil's Tomb

". It's got a decent cast, including Cuba Gooding Jr, Ray Winstone and Ron Perlman and it's directed by Jason Connery, son of Sean Connery... this is only the second project he's directed, his directorial debut being "Pandemic". This had a budget of around $10Million and it's about a team of mercenaries, contracted by a mysterious CIA operative to rescue a scientist working on an archaeological discovery deep under the Middle Eastern desert. The true secret of what lies beneath, a secret that's been protected for thousands of years, will be discovered... and it's not of this earth. The trailer makes it look like a supernatural version of "Aliens" with a Michael Bay flair... but, I don't know. Actually, what I really don't know is how movies like this can make money. $10Million budget going straight to DVD? The least they could do is get it on cable somewhere, then release it on DVD.

Now, I'm not sure if "Gothkill" has already been released and this is a new version or if they're just giving it a fancy name for the DVD release, but "Gothkill: Satanic Special Edition

" comes out this week. We actually had the chance to review it and interview the writer/director, JJ Connelly, a little while ago. I highly recommend supporting indie film and picking this film up... definitely worth it. It's got everything that a micro-cinema horror should have. Also, you should be reading the interview, which can be found here.

" comes from Randall Kaplan, distributed by Pathfinder Pictures and it's a horror anthology of five short horror films, all of which are shot in black and white. Judging from the trailer, it actually looks pretty awesome. You'll get "Id", "The Basement", "The Child", "The Insides" and "Boxhead". Each film has the victim confronting a fear, which they'll have to deal with or die with it. From what I can tell, they're all short films that he's made over the last few years, ranging from "Id", which was done in 2004, to "Boxhead", which was done in 2008... and now he's compiled them all up and packaged them together for distribution. Great idea, might have to try to get in touch with him to discuss it.

", directed by Amir Valinia and starring DMX, was originally called "Lockjaw: Rise of the Kulev Serpent". Close your eyes and think of that title... "Lockjaw: Rise of the Kulev Serpent". It almost sounds like Russian porn... doesn't sound like a horror, really. It doesn't sound like anything that I'd want to watch and it definitely doesn't sound like it's a film about a magic voodoo pen that helps a guy create a monster snake that attacks a group of reckless suburbanite teens that accidentally killed his wife in a hit and run... does it?
Posted by Dead Harvey at 9:00 AM