New Horror Out On DVD This Week: Coming At You In 3D! 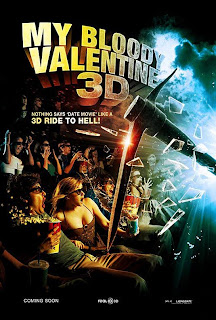 Well, I have family in town due to a wedding this weekend and I've barely been able to get to a computer. I feel disconnected... out of touch. Brutal. Anyhow, I thought I'd be able to get to it a few times and keep things rolling here, but... well, shit happens. Having said that, I really wanted to talk about the new horror coming out this week, as it's actually a decent week and there's some lesser known titles coming out that you should know about. So, I'm actually sneaking away right now... I'm going to quickly get through all of these, but I doubt I'll be able to post anything for Tuesday morning due to that... and the fact that I have to drive people to the airport. In any case, there's mass departing tomorrow and things will be all back to normal for Wednesday. As usual, you can go to our Youtube page to check out all the trailers, plus you can click on the title to be taken to their page on Amazon.

The big release of the week is "My Bloody Valentine 3D

", which is available in a few different formats and I'm really not sure why. The first is that one, just called "My Bloody Valentine 3D" and it includes four pairs of 3D glasses, the next is "My Bloody Valentine 3D/2D Flip", which also includes four pairs of 3D glasses, and, lastly, one that's just called "My Bloody Valentine". So, why do we need the other two versions? Shouldn't the 3D/2D flip be enough? Wouldn't that mean that it's BOTH versions? Is there a difference between THAT 3D version and the exclusively 3D version? To be honest, I didn't research it too deeply, but... come on. Anyhow, I actually really want to check this out, but not because of the film itself. I couldn't give a fuck about that. What I'm interested in is checking out the quality of the 3D. The stuff they're doing in the theaters is pretty f'ing impressive, but the home version stuff has never really blown my skirt up. So, could be worth it...

" is a fairly intense looking French film from Franck Vestiel, which premiered at The Toronto Film Festival and has been getting good reviews. It's the first film from Vestiel, as a director, and he shot the entire film using only hand-held cameras. The story revolves around Tolbiac, who wakes up in a cave, naked and disoriented and next to a dead body. Suddenly, digital phantoms appear in front of him and inform him of a paradise known as Eden Log. He then sets off to find Eden Log, as he is pursued by various ravenous mutants and phantoms. I heard it described as a techno-horror, or something and, excessive categorizing aside, it does look pretty good.

", which won the best feature award at Shriekfest and was considered a bit of a horror festival hit, comes out of the UK and is written and directed by James Eaves. Oddly enough, it seems to share a few plot points with the previously mentioned "Eden Log", as, in "Bane", a group of four women wake up, with amnesia, in an underground cell. They're each visited by a surgeon, who carves a number into them, and they figure out that they're part of a strange experiment that has no obvious point. I don't want to ruin any ending here, but expect a strange turn of events at the end... Reviews are good and it looks like it had a fairly low-budget, but it's put together really, really well.

" is from Michael Bafaro and it stars Darryl Hannah. I'm not sure why they changed the title, but it looks like it was originally called "The Cycle" or it's just called "The Cycle" in some markets, "The Devil's Ground" in others. In any case, it's from Anchor Bay and it looks like it's got a bit of budget behind it. It's about a group of people that go to research an ancient burial ground, only to find that what's buried there ain't so ancient. An ancient curse is awoken, Darryl Hannah gets involved, horror ensues...

If you're looking for something about conspiracy theories and secret societies, I wouldn't pick up "Skull & Bones

". "Skull & Bones" is actually an indie-horror about a couple of angry gay dudes who wreak havoc on an Ivy League school. It's written and directed by T.S. Slaughter and it's being described as a "tale of HOMO-cidal mania" - you can expect rape, murder and a 'shocking ending that will disturb even the sickest horror fans'. Check out the trailer, not one for the squimish... or, not one for the squimish straight males, anyhow.

Fans of Takashi Miike and Tokyo Gore get a flick to check out this week, as Miike's "Detective Story

" gets its North American release. "Detective Story" is about a couple of guys named Raita who are looking for a murderer, but end up partnering up with a painter who, supposedly, uses real blood and guts to create his pieces. It goes something like that, anyhow... it's tough to descibe a Takashi Miike film sometimes and, as I haven't seen this one, I have no idea what's in store. However, if you know Takashi Miike, you know Takashi Miike and you know what you're getting.

" is a indie horror from Arthur Vincie and it's about an ex-marine who's drifting through life, moving from one pointless job to another. He moves back to his childhood home to escape the nightmares he's been having, but instead of things getting better, they get worse... and they start coming true. It looks like a fairly well put together micro-cinema film. Definitely worth checking out.

That's it for now, look for a new post on Wednesday!
Posted by Dead Harvey at 2:45 PM

eToro is the #1 forex broker for newbie and professional traders.