New Horror Out On DVD This Week: The Week Of The Third Installment 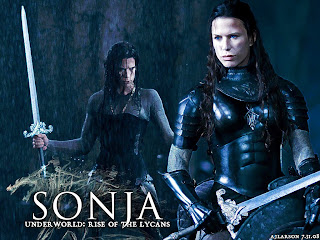 Not a banner week in new horror, but it's also not a bad week... you should be able to find something you like. There's a couple of part 3's, there's some micro-cinema, there's some festival films - like I said, a little something for everyone. Anyhow, click on the title and you'll be taken to that films Amazon.com page and you can also check out all the trailers, here, on our Youtube page.

Although I did like the original, I'm not a huge fan of the "Underworld" series. Having said that, it has been a bit of a powerhouse, with the three films grossing over $300Million Worldwide and spawning comics, novels and video games. And, really, that's what Hollywood is looking for in a franchise - something that can be licensed and put everywhere. "Underworld: Rise of the Lycans

" is the third installment and it's probably the weakest of the three. The plot revolves around the origins of a few of the characters and the events that lead up to the Vampire vs Lycan war. This is the first of the films to not feature Kate Beckinsale... and I say 'not feature' because she didn't actually shoot any new footage for this, but they did use a scene from the original "Underworld" to bookend the film and she provided a new monologue for the beginning and end of the film. If you're into the big budget Hollywood films, this one should satisfy you.

Speaking of weaker third installments in film series', "The Grudge 3

" comes out this week, as well. This was originally slated to come out on March 23rd, but got pushed back, which is never a good thing... especially considering that it didn't even get a theatrical release. Who knows, though? I haven't seen it and, although I wasn't particularly fond of "The Grudge 2", I'll check it out. The events of this film occur a few months after the events of "The Grudge 2", where Jake, the sole survivor, is now institutionalized.

Now, to some good, old-fashioned micro-cinema horror - stuff you need to support! "Doomed To Consume

" is from Jason Stephenson, distributed by new indie horror label New Blood Entertainment. If you remember, not too long ago, we talked with Nigel Hartwell, who's the writer/director of "Dead by Dawn" and the brains behind New Blood. You can check out that interview here, if you're interested - if you're looking for a distributor, you'll want to read that and check out their site. We're hoping to have do an interview about "Doomed to Consume" soon, as well. Anyhow, this is definitely one for the Dead Harvey crowd.

", written by John Cregan and David Gregory, directed by Gregory, screened at various horror festivals over the last year or so, including Fangoria's Weekend of Horrors. It's about an American family, visiting their roots in Ireland, that accidentally stumbles onto a hoard of bloodthirsty mutant children. Judging from the reviews and comments that I read, it should be pretty good and have a decent amount of gore. Trailer looks good... I'm always a fan of the strange shit.

" is written and directed by Michael Feifer and is inspired by the real-life serial killer, Dennis L. Rader. Playing Rader is everyones favorite Jason, Kane Hodder. Hodder's actually been in quite a few films inspired by real-life killers lately... he was also in "Bundy: An American Icon" and "Ed Gein: The Butcher of Plainfield". Since we're talking about Hodder, he's in a ton of upcoming projects, including "Hatchet 2", "Black Friday 3D", "Escape of the Living Dead" and around 5 other films.

If there's nothing that toots your horn up there, maybe Bruce Campbell will. I usually don't like to mention rereleases, but I always have a bit of time for Bruce. Available this week is a 2 Pack of "Man with the Screaming Brain" and "Alien Apocalypse

". "Man with the Screaming Brain" is, no surprise, a sci-fi/slapstic film and it's co-written and directed by Bruce... and "Alien Apocalypse" is written and directed by Josh Becker. Both films were shot in Bulgaria, presumably back to back to save on production costs... Bruce F'ing Campbell. Bless.
Posted by Dead Harvey at 9:00 AM