New Horror Coming Out On DVD This Week 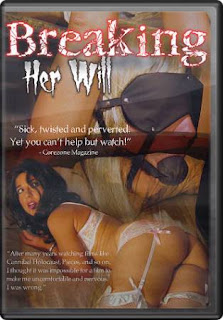 Just an interesting follow up to Friday's post... Even though it was pirated and available to the public weeks before its theatrical release, then had some so-so reviews, "Wolverine" still kicked ass at the box office, raking in over $87Million. So, what does that prove about piracy? Not much. However, it could suggest that the quality and hype of your film is more important than leaks or early talk. Further, I still think that having your film available online isn't necessarily a bad thing. I think it creates buzz, which creates awareness, which gets people wanting to see it. Anyhow, the debate rages on and "Wolverine" is still the biggest film of the year... to date. Anyhow, let's look at a few films that grossed slightly less than that. As usual, you can click on the titles and check them out on Amazon or go to our Youtube page to see all the trailers.

" is an interesting film, for a couple reasons... one, it's supposedly the first feature film shot entirely using surveillance camera footage. Faked surveillance camera footage, but surveillance camera footage, none the less. Would be boring, if it was... surveillance camera's rarely record sound. The other thing that's interesting is that the US Postal Service refused to deliver their promo postcards, which depicted a man, boxers around his ankles, having sex with a woman in a generic looking mailroom, as captured on hidden camera. I wonder if it was the fact that it was sex or the fact that it took place in a mailroom? In any case, the film is from Adam Rifkin, who's written and/or directed a few interesting projects in the past, including: "Psycho Cop Returns", "Detroit Rock City" and "Homo Erectus", which was later changed to the title, "National Lampoon's The Stoned Age". I'm not sure if it classifies as a horror, but it's definitely interesting to check out, from an indie filmmaking perspective.

I'm pretty sure that "End of the Line

" are coming out as a double-pack, although I'm not sure why... except for the fact that they're both released by Anchor Bay. If you do buy these off Amazon, double check what you're getting, to be safe. "Scarce" is from Jesse T. Cook and John Geddes and is about the gruesome fate of three lost snowboarders trapped at an isolated forest cabin owned by two menacing locals who harvest human flesh. "End of The Line" is from Maurice Deveraux, whose last film was "Slashers" from 2001. "End of The Line" is and award winning film about a young nurse who boards the last subway of the night, but when it stops... it stops in the middle of the tunnel and the people on the train start getting killed. Her and a handful of survivors must then face supernatural forces, homicidal religious cult members, as well as their own fears and suspicions of Armageddon.

" comes from friend of Dead Harvey... and Dead Harvey favorite, Bill Zebub. We talked to Zebub a while back, you can check out our interview with him here. Without question, he's a unique voice in the indie horror scene and if you're watching, making or just considering indie and micro-cinema horror, you should really check out his work. Sometimes he can be over-the-top funny, like with "Assmonster" or "The Most Offensive Comedy Ever Made" and other times he's just over-the-top. "Breaking Her Will" has been called 'sick', 'perverted' and 'sleaze'. With "Breaking Her Will", Zebub set out to make a film that would make you cringe and when he sets out to make something, he generally follows through on his promises...

"The House of the Demon

" is an indie horror from George L. Ortiz and it's about a group of college friends who won't let the university's ban on parties spoil their good time. So, they party at one of their recently deceased uncle's abandoned house... which ends as an outrageous nightmare of demonic possession. It's a micro-cinema horror, with some great looking effects, nudity and gore... it also screened at both the Horrific Film Festival and at the Full Moon Horror Film Festival.

" screams British Horror, but mostly because they spelled MOM... MUM - dead give-away there. The film is from Steven Sheil and it follows Mum and Dad and their adopted children, Birdie and Elbie, who work at the airport... and live off whatever they scavenge from cargo holds, offices and hotels, including a steady stream of transient workers who populate the airport's soulless hub. Lena, a young Polish office cleaner, befriends Birdie and is drawn into her world of torture, murder and perversity. Hey, a family that slays together, stays together, right? Anyhow, as it's a British horror called "Mum & Dad", you'd expect a bit of tongue in cheek humor here... but it doesn't look like you're going to get it. Judging from the trailer, you're getting a gruesome, sick & twisted flick here.

" comes from Franklin Guerrero Jr, who was they guy behind "Carver", which came out last year. "The 8th Plague" actually came out a few years ago now and I saw it back then and it's quite good. Since I saw it, it's gone on to won the jury award at the Chicago Horror Film Festival and Best of Fest at the Freaky Film Festival. I'm not sure what's involved in this special edition, but it's a great indie horror that's worth checking out.

"From A Place Of Darkness

" comes from Douglas A. Raine and it's actually available on Blu-ray

, as well, which is cool... it screened at various horror film festivals and got some decent reviews. What I like is that it has Bronson Pinchot in it... and he's billed third. It's about a documentary filmmakers who crosses the line and becomes obsessed with his subject, the King of snuff films. He delves into a world of nudity, forbidden sex and violent crimes. Then, the ghosts of those films return to warn him... or lure him into... a place of darkness. I'm having a tough time figuring this one out, so I may have to see it. The quality of filmmaking and the gore is top of the line, yet the trailer I checked out is, no offense to the makers of the trailer, a little low-budget. Go to our Youtube and see what I mean... either way, it looks pretty good.

", this is the latest. This is not the one about the actress who gets conned into starring in a snuff film in Asia. This one is the debut film from writer/director Dan Martin and it's a nasty, gritty throwback to the grindhouse films of the 70's and 80's. The film follows an escaped mental patient who hides in his derelict caravan, hiding from the police and doctors and filming himself raping and murdering people. It's filmed from two perspectives, both the traditional third person camera and the killers own Hi8 camcorder.

" looks far too familiar... because it reminds me a LOT of Dead Harvey's own Aaron Burk and Brad Paulson's, "The Blood Stained Bride

". The cover art even looks similar! Check out "Hellbride" on that link up there, then click on "The Bloodstained Bride" link. Coincidence? I don't think so... Plot's different, though. Not to mention this one's from the UK and Burk and Brad's was done on no budget in LA. In any case, this one's about a girl, whose boyfriend just proposed. However, she's got a dark secret, a cursed engagement ring and, come the wedding day, there will be bloodshed.

"Rise Of The Scarecrows

", from Geno McGahee, comes out this week and I don't even have to write about this one. Click here and go to our interview with him and he'll tell you all about it!
Posted by Dead Harvey at 9:10 AM

Pat Higgins, writer/director of Hellbride here.. Hope you dig the flick if you choose to check it out.. From the looks of things, the cover art was done by the same distribution company as for Bloodstained Bride (Brain Damage/Midnight Releasing) which might explain 'house' similarities of style, beyond that the flicks sound in no way similar.. I certainly hadn't heard of Bloodstained Bride before today (although I'll try and check it out if I get the chance.. Always looking for new stuff to watch).
Great work on the site!
Cheers,
Pat

Hey Pat... I was just kidding, I was mostly giving props to "Blood Stained Bride", as it was done by two very good friends of mine. Having said that, "Hellbride" looks great and I'd love to check it out and discuss it with you... shoot me an email at ted@deadharvey.com when you get a chance!